"Passion Play": Megan Fox and Mickey Rourke, together at last

A pair of doomed stars play a haunted jazzman and a woman with wings in a laughable, sub-Lynchian fantasy 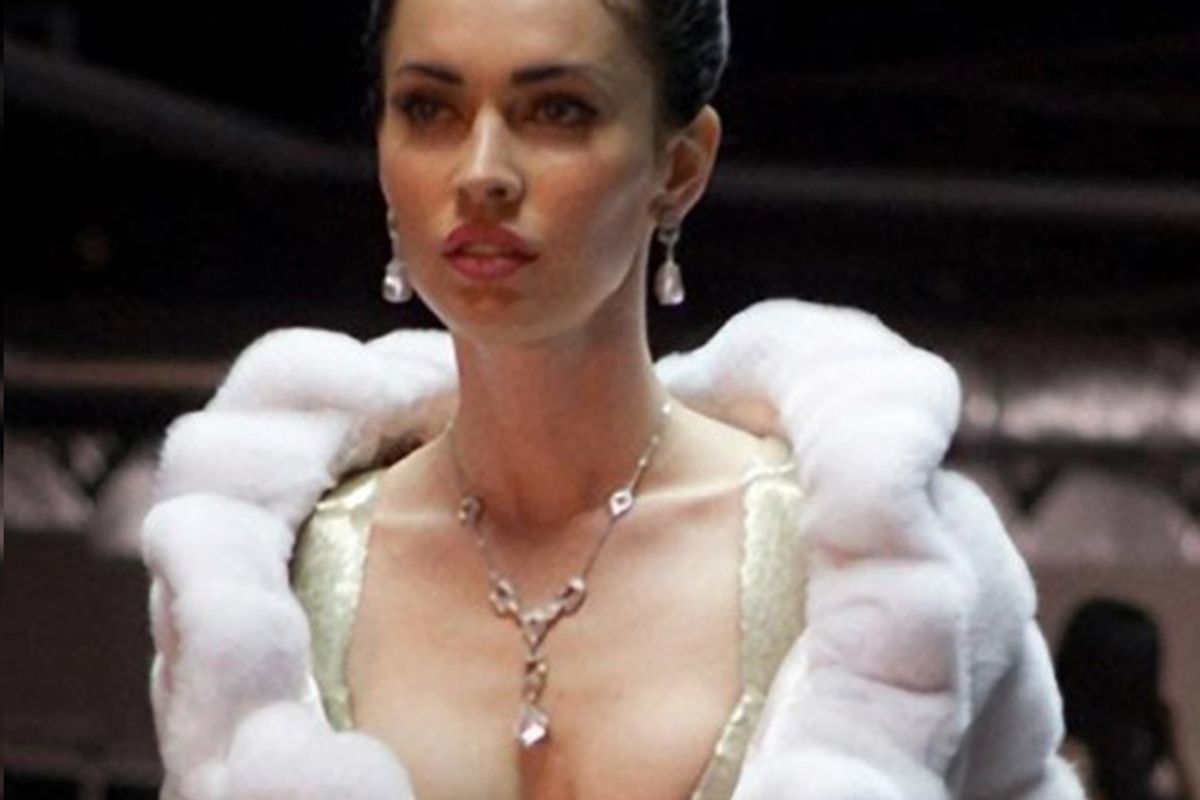 As a first-grader I know frequently informs me, there are four fundamental forces in the universe: the strong nuclear force, electromagnetism, the weak nuclear force and gravity. He doesn't know about the fifth force, recently discovered and poorly understood, the one so powerful and so insidious that it has drawn Mickey Rourke and Megan Fox together to make an earnest, baffling and occasionally risible love story called "Passion Play." Evidently a labor of love for writer-director Mitch Glazer (whose wife, Kelly Lynch, plays a likable supporting role), "Passion Play" was already halfway to becoming legendary when it screened last fall at Toronto. Some viewers there proclaimed it a masterpiece of exquisite badness, which isn't entirely fair. Oh, it's bad, all right -- a hackneyed Bukowskian fantasy, set in a thoroughly imaginary noir universe inhabited by hard-drinkin' jazzmen and worldly hookers -- but that's not half as surprising as the fact that it got made in the first place.

Rourke plays an ex-junkie trumpet player who cheats death in the Mexican desert with the help of a tribe of ghostly Indians -- you only wish I were kidding -- and keeps falling in love with the wrong girl. (The character is inspired, I'm pretty sure, by the late, great Chet Baker.) Fox plays the last of those girls, who has wings. Yes, wings, with feathers and everything. It's a miracle or it's a metaphor or it's a sex thing or something, and it points you right at the final plot twist, which I won't tell you but you might figure out anyway. The movie also has Bill Murray as a sinister, milk-drinking gangster named Happy, who isn't happy. He injects a note of comic menace and acts rings around the two principals, while demonstrating (once again) that he'll appear in absolutely anything as long as the checks clear. This is all supposed to be mythical and hard-boiled and deeply American, except that it was shot, student-film-style, in a lot of unpromising suburban locations on the fringes of Albuquerque. The net effect is as if someone had set out to imitate a David Lynch movie without ever having seen one, or as if it had been directed by Wim Wenders (which is approximately the same thing).

Apparently no one close to Rourke or Fox ever suggested that working with that person might not be perceived as a viable step on the comeback trail. But then, they wouldn't be in Mickey Rourke-Megan Fox territory in the first place if they made better decisions, would they? Clearly these two former stars are going through what might be called bumpy patches, and I agree that desperate times require desperate measures. Rourke has of course already had his big comeback from the outer wilderness of the movie industry and his ill-fated "boxing career," and that's not the kind of thing that happens twice. If he really can't get enough of reminding us that he used to be a great actor and is now a walking ruin with an immobilized face, he could get small parts as heavies or make fun of himself on a reality show or whatever. Instead he mumbles through this role, trying to express emotion through that painfully frozen visage and wearing a lot of bad, too-tight suits that are supposed to be vaguely '40s-ish or vaguely Western or something but mostly look as if he bought everything in his size at the local Salvation Army and is wearing it all at once.

Fox's role here is more understandable but almost certainly more doomed. Rourke was a great talent and his life is a great story, terrible choices and all, while Fox's stardom couldn't survive the first round of magazine stories. Maybe that wasn't altogether her fault; the ritual performance of seduction, revelation and manipulation demanded of any hot young actress must be exhausting, and there are always hundreds of other beautiful girls waiting to take your spot when you stumble. She can still soak up the camera hungrily, from those huge eyes and that perfect cascade of hair to the improbable wasp waist. And she certainly needs a comeback vehicle after the memory-hole debacle of "Jennifer's Body" -- even those who saw it will now deny it -- and a whole bunch of post-"Transformers" coverage that variously made her look like a diva, an ingrate and an airhead. But playing a role as a bird-woman circus freak, and soing several mercifully vague sex scenes with a guy who looks like a sculpture of Thomas Jefferson carved out of ham -- that probably isn't it.

"Passion Play" is now playing in New York and Los Angeles, with other cities to follow, and is available on-demand from cable and satellite providers.