As top horses fall by the wayside, the path is clear for a wild card to take the lead 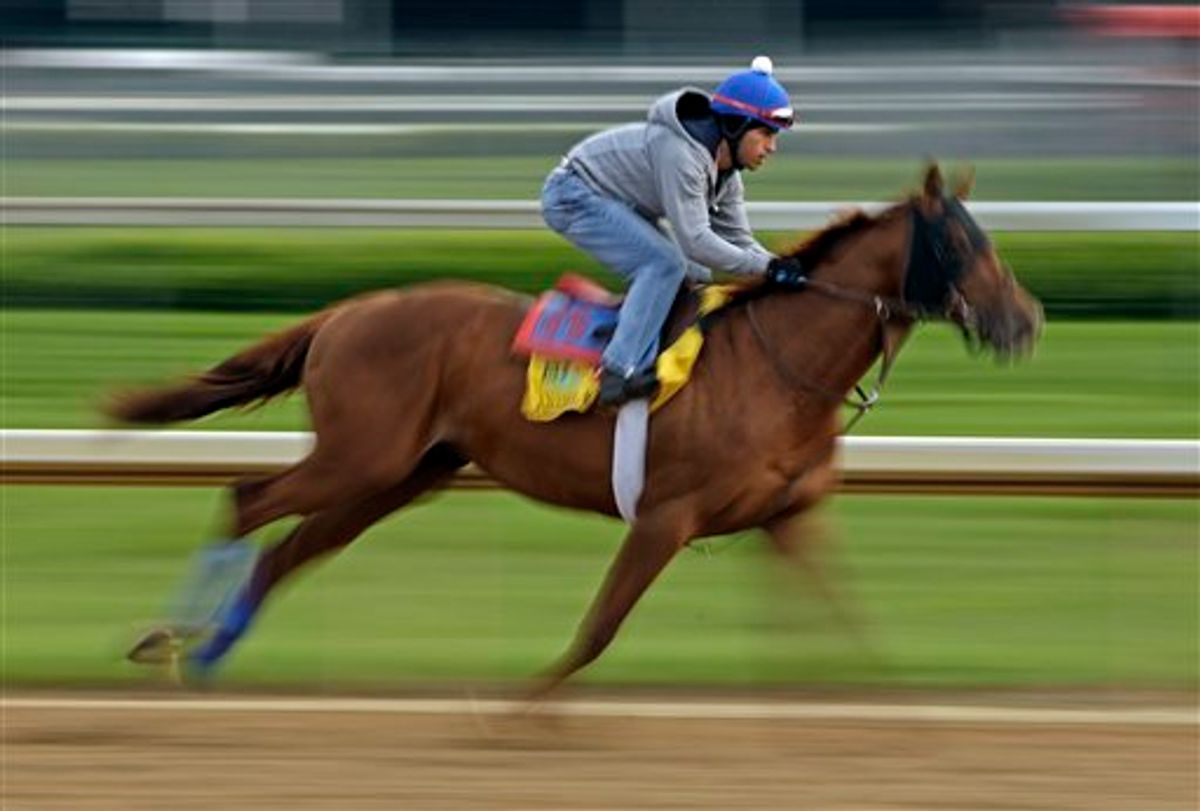 Trainer Todd Pletcher said Uncle Mo "just wasn't right" when he decided to scratch the reigning 2-year-old champion from the Kentucky Derby on Friday due to a lingering and somewhat mysterious stomach issue.

Pletcher could just as well have been talking about the jumbled Derby picture itself.

Looking for racing's next star to emerge at Churchill Downs on Saturday? Look elsewhere, as a series of defections over the last month have turned a race typically consisting of a "who's who" among the sport's top 3-year-olds into a race of "who's that?"

The Factor. Jaycito. To Honor and Serve. Premier Pegasus. Toby's Corner. All were considered legitimate Derby shots at some point. All will be well out of sight when the 137th edition of the Run for the Roses unfolds under the twin spires.

In their place are horses such as Watch Me Go, Shackleford and Derby Kitten. Largely unknown. Largely unproven. Their connections largely unapologetic for the position they will find themselves in when the starting gate opens at 6:24 p.m. EDT.

"There's only one Kentucky Derby," said owner Ken Ramsey, who didn't get Derby Kitten into the race until a day before entries were due. "Nobody will care how we got here if we win."

Dialed In is the 4-1 morning-line favorite for trainer Nick Zito, as much by default as anything else.

In a year when no one seems capable of running with any sort of consistency, Dialed In appears to be the closest to a sure thing, even if Zito is hardly convinced his fast-closing colt is the class of the 19-horse field.

"There are a lot of good horses in this race," Zito said.

Just probably not any great ones.

Not that owner Robert LaPenta is complaining. While he points out that most of the favorites this year have lost, he adds Dialed In is the only runner in the field who hasn't lost to a fellow 3-year-old this spring in winning both the Florida Derby and the Holy Bull.

"I'm hoping this could be a three-peat," LaPenta said.

Getting to the wire first at the end of the strenuous 1 1/4-mile test won't be easy. Or pretty.

Traffic is going to be a major issue and LaPenta remembers all too well how his colt Ice Box finished second behind Super Saver last year.

"You read the summary: stopped, checked, stopped, this is not what we want this year," LaPenta said. "We want to see him making his run right down the middle of the track, gobbling up ground. I don't care if he turns his head left or right, he will mow them down."

Maybe. The forecast calls for afternoon rain showers, which could compromise the track and further complicate matters for the favorites.

In 2009, Calvin Borel guided unheralded gelding Mine That Bird through the slop to win as a stunning 50-1 long shot. He did it in the mud last year with Super Saver, becoming the only jockey in Derby history to win the Derby three times in four years.

Borel will try to make it 4 for 5 with Twice the Appeal, who will start from the third post, just a couple of jumps away from Borel's preferred spot on the rail.

The Cajun jockey lives by the mantra "you got a hole, you got a shot." It's a phrase adopted by many of the groups looking to take advantage of one of the most wide-open races in recent memory.

It wasn't exactly the Derby everyone expected last fall, when Uncle Mo romped in the Breeders' Cup Juvenile. Owner Mike Repole had little doubt he'd return to the track this spring with the favorite, and everything was going to plan until Uncle Mo tired in the stretch in the Wood and faded to third.

Pletcher told Repole on Friday morning he didn't think Uncle Mo should run, a decision Repole called a relief. Then again, he has a backup plan in Stay Thirsty.

"I know I'm lucky I've got another horse to run in the race and we'll hope he can step up," Repole said.

Somebody will. Maybe someone who never planned to be here in the first place.

Trainer Peter Miller watched frontrunning Comma to the Top finish second in the Santa Anita Derby a month ago and pledged he'd skip the trip to Churchill Downs because the field looked so deep.

As the top flight horses fell by the wayside, Miller turned to his owners and said, "Why not?"

"I started to look at it like my horse is as good as any of these horses," Miller said. "I've got more experience. I've got more wins and he deserves a chance and here we are."

So are three females hoping to make Derby history.

The trio is one of several storylines looking to fill the void left by Uncle Mo's absence.

Arkansas Derby winner Archarcharch will start from the rail for 70-year-old trainer Jinks Fires and 50-year-old jockey Jon Court, both of whom are making the first Derby appearances of their lengthy careers.

Nehro, a very game second in Arkansas, will try to help trainer Steve Asmussen end an 0-for-9 mark in the Derby.

Three months ago, it appeared The Factor and Jaycito were locks to be here on the first Saturday in May. Instead, Baffert made his way back to Churchill with a horse who didn't even race as a 2-year-old while his more accomplished stablemates will sit out with injuries.

Midnight Interlude's path to the first jewel of the Triple Crown simply highlights the unpredictable nature of the journey.

"There's so much parity," said Baffert, who won the Kentucky Oaks on Friday with Plum Pretty. "When you have a lot of equal horses and there's no standout, everybody thinks, 'Well, maybe it's not that tough of a field,' but I think it's a tough field."

So does Zito. He's heard all the talk about the lack of talent in the race. He doesn't care if it takes 2 minutes or two days if Dialed In can find his way to the finish line first and don the blanket of roses reserved for the winner.

"Slow, fast or in-between, as long as he gets the distance what do we care?" Zito said. "If he does what we ask him to do, what's the difference really?"

MORE FROM Will Graves