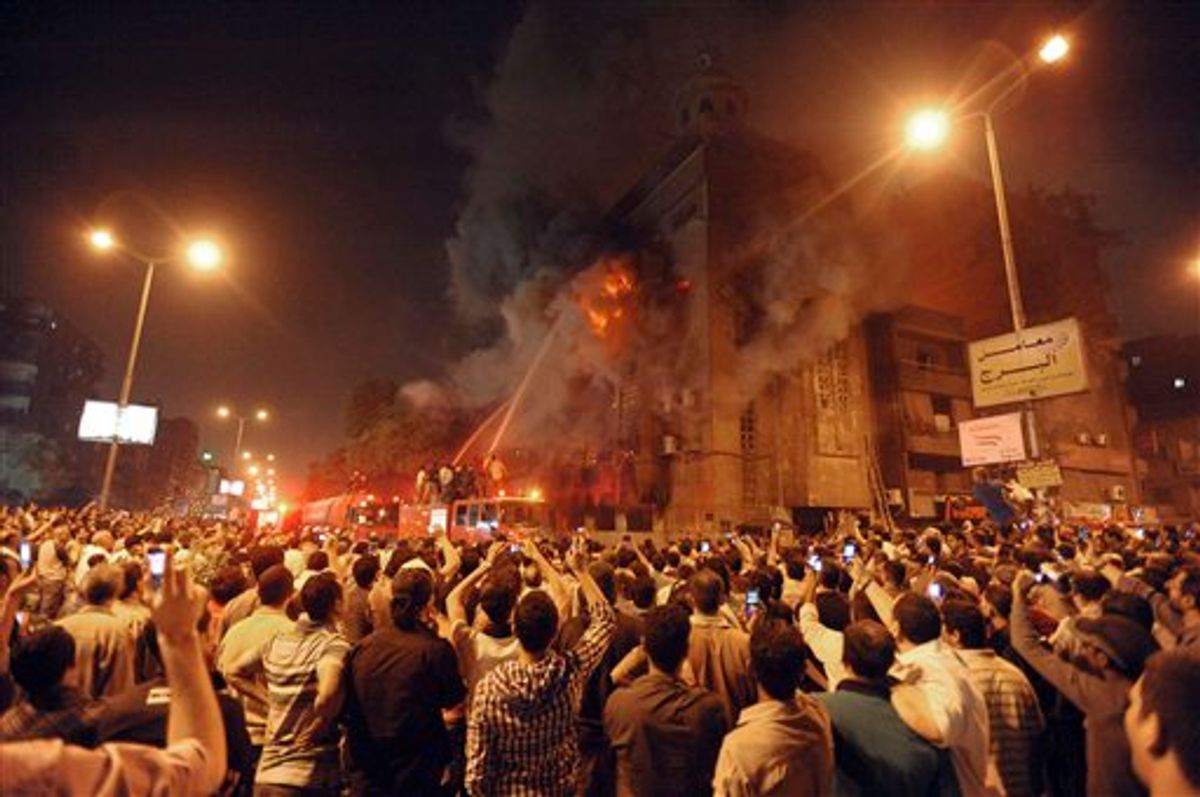 Firemen fight a fire at a church surrounded by angry Muslims in the Imbaba neighborhood in Cairo late Saturday, May 7, 2011. Christians and Muslims fought in the streets of western Cairo in violence triggered by word of a mixed romance, Egypt's official news agency reported. (AP Photo) (AP)
--

Muslim mobs set two churches on fire overnight in Cairo during sectarian clashes that left 12 dead and more than 200 injured. The deepening religious violence in military-ruled Egypt added news tensions to an already chaotic and lawless transition to democracy.

Military authorities arrested 190 people, immediately sending them to military prosecutions and threatening the maximum penalty against anyone attacking houses of worship. It was the military's toughest response yet to a series of violent clashes between the two religious groups and signifies swift justice.

Mobs of ultraconservative Muslims attacked the St. Menas church in the Cairo slum of Imbaba late Saturday following rumors that a Christian woman married to a Muslim man had been abducted. Local residents said a separate mob of youths armed with knives and machetes attacked the Virgin Mary church several blocks away with firebombs.

"People were scared to come near them," said local resident Adel Mohammed, 29, who lives near the Virgin Mary Church. "They looked scary. They threw their firebombs at the church and set parts of it ablaze."

During Egypt's 18-day uprising that ousted former President Hosni Mubarak several months ago, there was a rare spirit of brotherhood between Muslims and Christians. Each group protected the other during prayer sessions in Cairo's Tahrir Square, the epicenter of the revolution.

But in the months that followed the toppling of Mubarak on Feb. 11, there has been a sharp rise in sectarian tensions, fueled in part by newly active ultraconservative Muslim movement, known as the Salafis.

The once quiescent Salafis have become more assertive post-revolution in trying to spread their ultraconservative version of an Islamic way of life. In particular, they have focused their wrath on Egypt's Christians, who make up 10 percent of the country's 80 million people.

On Friday, a few hundred Salafis marched through Cairo celebrating al-Qaida leader Osama bin Laden and condemning the U.S. operation that killed him.

Egypt's state news agency said of those killed, at least six Muslims and at least three Christians were among those killed. The body of one Christian was found inside the St. Menas church, the agency said. The Health Ministry said 12 had died and more than 230 were injured, at least 11 of them critically.

The clashes were set off Saturday around sundown when word spread around the low-income neighborhood of Imbaba that a Christian woman who married a Muslim was abducted and is being kept in the church against her will.

The report, which was never confirmed by local religious figures, sent a large mob of Muslims toward the St. Menas church. Christians created a human barricade around the church and clashes erupted. Gunfire sounded across the neighborhood, and witnesses said people on rooftops nearby were firing into the crowd.

Muslims alleged the Christians opened fire first. Then crowds of hundreds of Muslims from the neighborhood, in many parts instigated by the local ultraconservative Salafi sheiks, converged on the area. They lobbed firebombs at homes and shops and also at St. Menas church, setting its facade on fire.

Residents say Christians were hiding inside. Muslims were chanting: "With our blood and soul, we defend you Islam."

The army and police tried to break up the crowd by firing tear gas, but failed to clear the streets. Troops surrounded the church after the fire was put out.

Later the same night, witnesses said a separate Muslim mob, mostly youths armed with machetes and knives, moved to the Virgin Mary church nearby and also set it on fire.

The mob then dispersed to side streets, and local residents, including the neighborhood's Muslims, tried to put out the fire. At one point, they attempted to get into the closed mosque opposite the church to get water. But the youthful mob armed with knives blocked Mohammed and others in his group.

"They told us keep the mosque out of it," said Mohammed, who lives near the church. "They were thugs. The way they talk, they have no religious or political views."

He said the firefighters and security arrived on the scene more than an hour later.

In the early hours of Sunday morning, angry residents stormed a six-story building near the St. Menas, saying Christians used it to shoot at Muslims.

"They were shooting from the roof, and they killed Muslims," said 18-year old Yehia Ramadan. "We won't stand by idle."

Flames were coming out of windows, and furniture were strewn along the sidewalks. The building appeared to be empty, but it was not clear when its residents fled.

Islamic clerics denounced the violence, sounding alarm bells at the escalating tension during the transitional period.

"These events do not benefit either Muslim or Copts," Ahmed al-Tayyeb, the Sheik of al-Azhar told the daily Al-Ahram.

In the deadliest violence since Mubarak's ouster, 13 were killed in pitched street battles in March after Muslims torched a church. That violence was also triggered by rumors of a love affair between a Muslim woman and a Christian man.

A New Year's Eve suicide bombing outside a Coptic church in the port city of Alexandria killed 21 people, setting off days of protests. Egypt made some arrests but never charged anyone with the attack.