Can AA survive our tell-all era?

A N.Y. Times story explains how alcoholics are following some celebrities' lead and giving up their anonymity 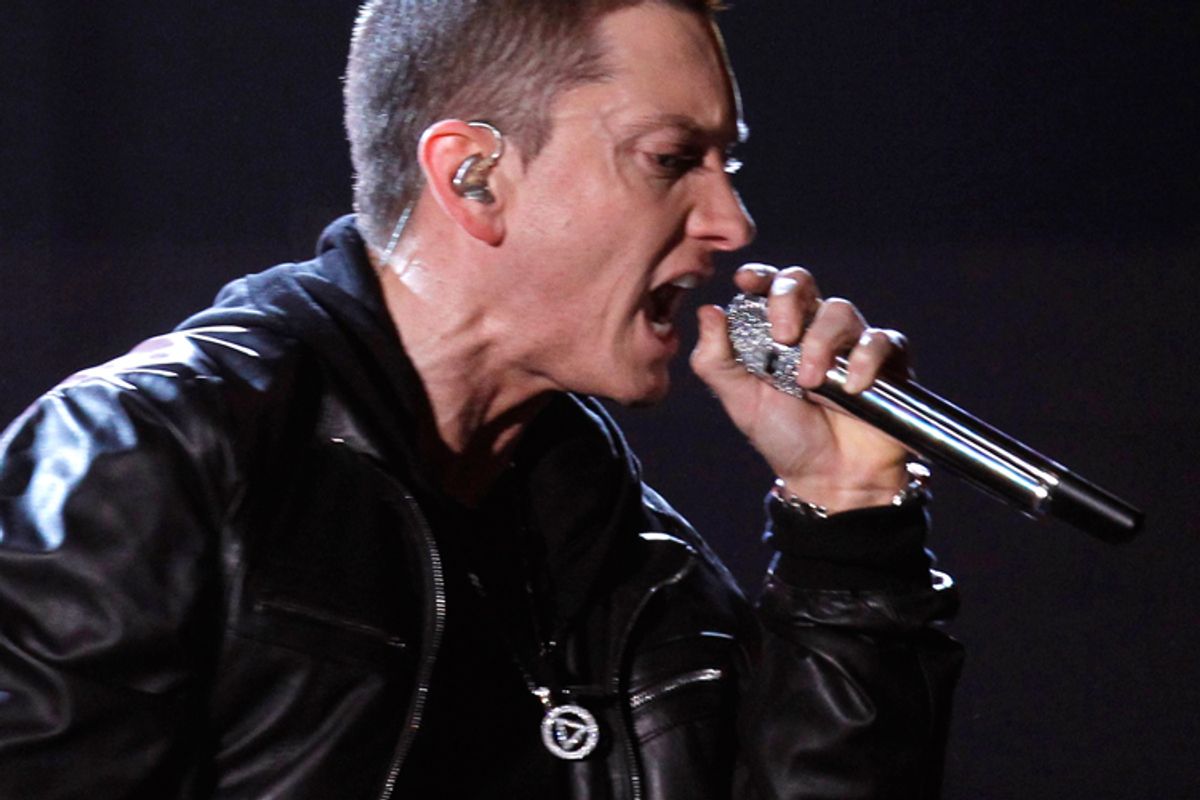 Eminem wears an Alcoholics Anonymous pendant at the Grammy Awards in February.
--

When Alcoholics Anonymous started 76 years ago, movie stars didn't regularly ship off to rehab, intervention as popular entertainment was a long way off, and people who drank too much weren't called alcoholics, they were just drunks. Yet through seven-and-a-half decades of cataclysmic social change, AA has remained constant in its 12 guiding principles -- including the big one, right there in the second part of its name. But as a New York Times story Sunday pondered: In the age of tell-all, is anonymity obsolete?

Writer David Colman is clear that he's proud of his sobriety, and in writing about it for the Times, he's equally aware that he has "more or less violated the first-name-only tenet of Alcoholics Anonymous… 'We need always maintain personal anonymity at the level of press, radio and films.'" Colman just isn't so sure about that "need" part. Noting the birth of the new recovery magazine the Fix and the rise of anonymity-flouting group photos on Facebook, Colman wonders if "anonymity is a concept that, even if it doesn't feel a bit old-fashioned, can be self-defeating."

AA has at times been compared unfavorably to the big gay closet, and there are parallel levels of disclosure to be worked through with both. There is, however, a huge difference between outing yourself and outing a group that has a written code of privacy. But they intersect in the crucial notion that everyone is entitled to a private life, and that no one's personal beliefs or relationships should be dragged out into the world without consent. That's just disrespectful. Recovery doesn't take place in a vacuum. We are tangled up in each other's lives. The person who chooses to sit silently in the back of the room as anonymously as possible is sitting next to the guy who brags at work about his one-year chip, who is next to the woman whose girlfriend has no idea how to tell their friends that they met at a meeting.

AA by extension brings people outside the program into its dogma -- a contract the sober person's inner circle may feel pushed into. I have a large number of friends and family in AA (that's the beauty of being Irish Catholic) and while I'd never break a loved one's anonymity, I have over the years had to issue a few reminders that it's not my program and it's not my set of rules to abide by or violate.

For some, the idea of being secretive about a group that says "you're only as sick as your secrets" seems contradictory. But for plenty of men and women trying to get sober, the stigma of substance abuse remains a genuine concern. Not everyone has the freedom of an Eminem to write an album called "Recovery" and sport an AA triangle at the Grammys. Not everyone has the clout of Russell Brand, who has mirrored his famous bouts of excess and subsequent sobriety in "Get Him to the Greek" and "Arthur." For others, there are profound social and career repercussions. If you're a schoolteacher or a doctor, maybe you don't want your colleagues and clients to know that a year ago, you were getting obliterated before work.

There are other compelling reasons for anonymity. The spiritual aspect of AA can be intensely meaningful -- and seemingly pretty woo woo to outsiders not familiar with the program. Admitting sobriety can turn exhaustingly into defending it for some, when it's easier to just say, "No thanks" to that offer of a beer. Susan Cheever is correct when she writes for the Fix that "Anonymity protects, but it also hides." It's kind of like the way a glass of wine can be an accompaniment to a meal or the beginning of a binge. It's what you make of it.

The old-fashioned idea of anonymity doesn't fit easily into the modern template. It's messy and inconvenient and at times downright counterproductive. But while AA's business model of having no official spokesperson and of attraction rather than promotion can make it seem more maddeningly shadowy than the Masons, it also assures that it won't foist its own versions of Dr. Drew upon the world. It's not for everybody, but you've got to give it props for its refusal to turn itself into TLC network, quick-fix shlock. As Colman admits, anonymity embodies the "often overlooked idea of humility." And in an age of boundless self-disclosure and narcissism, it's almost funny that not drinking doesn't seem nearly as odd or outdated as not telling the world about not drinking.