A vague, "aspirational" train plot leads to calls for a "no-ride" list for Amtrak 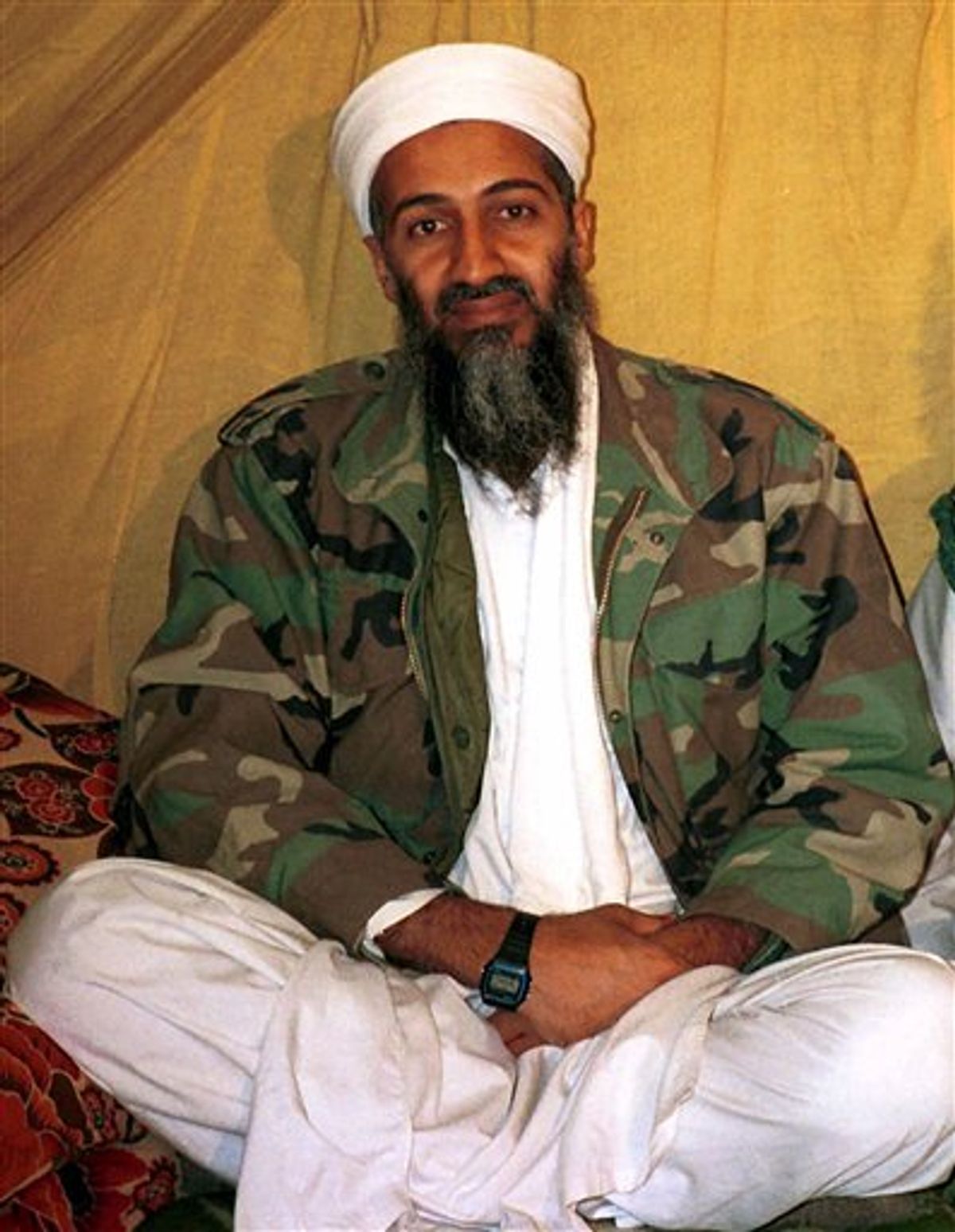 FILE -This undated file photo, shows Osama bin Laden. Americans are expected to get a glimpse of Osama bin Laden's daily life with the disclosure of home videos showing him strolling around his secret compound, along with propaganda tapes that have never been made public (AP Photo/File) (AP)
--

On Friday, government officials anonymously claimed that "a rushed examination" of the "trove" of documents and computer files taken from the bin Laden home prove -- contrary to the widely held view that he "had been relegated to an inspirational figure with little role in current and future Qaeda operations" -- that in fact "the chief of Al Qaeda played a direct role for years in plotting terror attacks."  Specifically, the Government possesses "a handwritten notebook from February 2010 that discusses tampering with tracks to derail a train on a bridge," and that led "Obama administration officials on Thursday to issue a warning that Al Qaeda last year had considered attacks on American railroads."  That, in turn, led to headlines around the country like this one, from The Chicago Sun-Times:

The reality, as The New York Times noted deep in its article, was that "the information was both dated and vague," and the official called it merely "aspirational," acknowledging that "there was no evidence the discussion of rail attacks had moved beyond the conceptual stage"  In other words, these documents contain little more than a vague expression on the part of Al Qaeda to target railroads in major American cities ("focused on striking Washington, New York, Los Angeles and Chicago," said the Sun-Times):  hardly a surprise and -- despite the scary headlines -- hardly constituting any sort of substantial, tangible threat.

But no matter.  Even in death, bin Laden continues to serve the valuable role of justifying always-increasing curtailments of liberty and expansions of government power.  From Reuters (h/t Atrios):

A senator on Sunday called for a "no-ride list" for Amtrak trains after intelligence gleaned from the raid on Osama bin Laden's compound pointed to potential attacks on the nation's train system.

Sen. Charles Schumer said he would push as well for added funding for rail security and commuter and passenger train track inspections and more monitoring of stations nationwide.

"Circumstances demand we make adjustments by increasing funding to enhance rail safety and monitoring on commuter rail transit and screening who gets on Amtrak passenger trains, so that we can provide a greater level of security to the public," the New York Democrat said at a news conference.

So Al Qaeda breathes the word "trains" and Schumer jumps and demands the creation of a massive, expensive and oppressive new Security State program to keep thousands and thousands of people off trains.  The "no-fly" list has been nothing short of a Kafkaesque disaster: with thousands of people secretly placed on it without any explanation or real recourse, oftentimes causing them to be stranded in faraway places and unable to return home.

To replicate that for trains -- all because some documents mentioned them among thousands of other ideas Al Qaeda has undoubtedly considered over the years -- is hysteria and ludicrous over-reaction of the highest order.  Trains can obviously be attacked without boarding them (indeed, these documents apparently discussed tampering with the rails, which wouldn't require boarding the trains at all). And if there's a "no-ride" list for Amtrak, why not for subways and buses, too?  If Al Qaeda is found to have discussed targeting restaurants, will we have a no-eat list?  If Al Qaeda is found to have discussed targeting large intersections or landmarks, will we have a no-walk list?  How about a no-shop list in response to the targeting of malls?

But this, more or less, encapsulates the U.S. response to Terrorism since 9/11: the minute Al Qaeda utters a peep about anything, the political class collectively jumps to restrict our freedoms, empower the Government, and bankrupt ourselves in self-destructive pursuit of the ultimate illusion: Absolute Security.  Al Qaeda has caused us to do more harm to ourselves than it could have ever dreamed of imposing on its own.  And even in death, Osama bin Laden continues to serve as the pretext for all of this.

I recently sat for an interview with the ACLU in Massachusetts on a variety of topics, including the trade-off between security and freedom.  Here is the two-minute segment on that topic, obviously related to all of this:


UPDATE II:  Here is the NPR segment I did earlier today: