Rick Santorum and the problem with the "loser" label 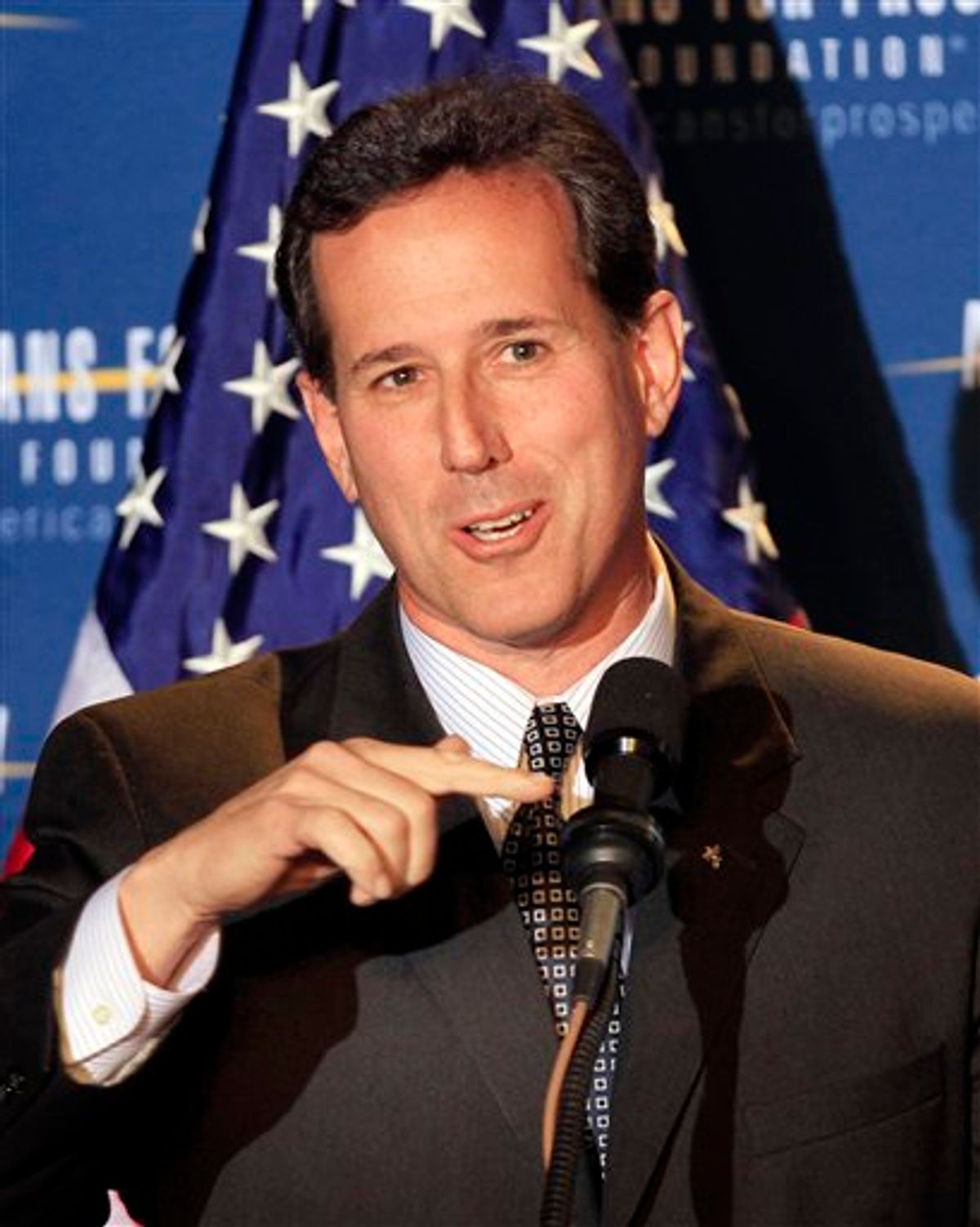 During last Thursday’s Republican presidential debate, Rick Santorum was asked to explain why GOP voters should make him their national standard-bearer even though he was crushed by his Democratic opponent by 18 points the last time he stood for election.

The question went a long way toward explaining why Santorum, a 52-year-old who represented Pennsylvania in the Senate for two terms before that defeat to Bob Casey in 2006, has such a remote (read: nonexistent) chance of capturing his party’s White House nod. He did his best to put a positive spin on it, but there’s really nothing that Santorum can say to free himself from the label that the ’06 result inflicted on him: Loser.

Simply put, presidential candidacies that are launched in the wake of high-profile electoral defeats are doomed, unless the candidate has benefited from some sort of major, image-altering development in the intervening years. A failure like Santorum’s in '06 signals to activists and opinion-shapers within a party that the candidate is damaged goods and lacks the basic appeal and campaigning skills needed to win over swing voters across the country. The media picks up on this too, treating the candidate as a has been, someone who is relevant because of what he once was -- not what he might someday be.

Thus, by virtue of his status as a former senator, Santorum enjoys most of the perks that major White House candidates are afforded: Influential players take his calls, he’s invited to participate in debates, forums and candidate cattle calls, his name is used in public opinions polls, he makes plenty of talk show appearances, and the media provides at least some coverage of his campaign. But this is all mainly a courtesy. For Santorum, reeling in meaningful endorsements, raising serious money, and gaining polling traction just isn’t in the cards, because to the GOP’s elites -- activists, elected officials, interest group leaders, fund-raisers, and commentators – he is, first and foremost, a loser.

Granted, there’s something thoroughly arbitrary about this. Santorum was hardly blameless for his 18-point defeat in 2006. He’d always been a cultural conservative, but his comfortable reelection in 2000 seemed to embolden him, and his second term was marked by noticeably more visible – and polarizing – rhetoric on social issues. His 2005 pledge, for instance, not to let the Terri Schiavo die "on my watch," surely left a negative impression on many of Pennsylvania’s swing voters. But the 2006 election was bigger than Santorum and his antics, shaped by a mighty anti-GOP tide brought on by Bush fatigue, chaos in Iraq and congressional scandals. That Santorum fell in that climate (and in a swing state) tells us no more about his skills as a candidate than his initial Senate victory in 1994, a year that was defined by a fiercely anti-Democratic tide.

But that’s how it goes in politics, where politicians -- like managers in baseball -- get far too much credit when things go their way and far too much blame when they don't. And it’s not like Santorum is the first nationally ambitious leader to be thwarted by the "loser" tag.

The most famous recent victim is George Allen, who was initially seen as a good bet for the 2008 Republican nomination -- a youthful, telegenic senator with impeccable conservative credentials and potential strength as a general election candidate would allow him to supplant John McCain. Allen even won the GOP straw poll at the Conservative Political Action Conference in February 2006. But then, the combination of his infamous "macaca" gaffe (which prompted reporters to dig into Allen’s past, where they found an apparent history of racial insensitivity) and the national anti-GOP tide cost him what was supposed to be an easy Senate reelection bid, and the presidential talk -- about 2008 or any other year -- stopped immediately

Going further back, there’s also the case of David McCurdy, an Oklahoma congressman and rising national star in the early '90s. McCurdy flirted with a presidential campaign in 1992 (when all of his party’s heavyweights, intimidated by the first President Bush’s post-Gulf War popularity, stood down), before backing Bill Clinton instead. When he seconded Clinton’s nomination at the 1992 convention, "McCurdy 2000" signs could be seen in the crowd. But a disastrous Senate campaign in the anti-Democratic year of 1994, in which McCurdy was left in the dust by James Inhofe, took care of that dream once and for all.

The career-killing effects of the "loser" tag were also very much on Richard Nixon’s mind when he put the White House’s muscle behind Alabama Governor Albert Brewer in 1970 in an effort to thwart Brewer’s Democratic primary opponent, former Governor George Wallace. A humiliating primary defeat, the president knew, would erode Wallace’s credibility as a White House contender for 1972. (The gambit nearly worked, with Brewer outpolling Wallace in the preliminary vote, only to be overtaken in the run-off.)

Some ambitious pols are smart enough to factor the threat of loserdom into their plans. Mitt Romney, for instance, recognized by the midway point of his term as Massachusetts governor -- when a massive effort revitalize the state GOP that he had bankrolled and organized blew up in his face -- that reelection in 2006 was an iffy proposition, and that it would be impossible as he moved to the right in anticipation of a 2008 national campaign. So he declared his one term a success and declined to run again. When his lieutenant governor, Kerry Healy, went down in flames in November ’06, Romney was already on the national stage -- well-positioned to supplant Allen as McCain’s chief intraparty threat.

To be sure, it’s possible to overcome the loser label.

Richard Nixon did so in 1968, securing the GOP nod (and the presidency) despite his 1962 California gubernatorial misadventure. But ’68 was a different era, and Nixon, thanks to his eight years as vice president, enjoyed a stature that most losers don’t. Even then, the '62 defeat (on top of his loss to John F. Kennedy in 1960) created such skepticism within the GOP that Nixon probably wouldn’t have won the nomination without the unexpected implosion of George Romney. George H.W. Bush was also technically a loser when he ran for president in 1980, having failed in a 1970 Senate campaign in Texas. But Bush used a series of image-enhancing posts in the 1970s -- Republican national chairman, ambassador to China, ambassador to the United Nations, and CIA director -- to enter the '80 race as something other than a defeated statewide candidate.

Short of scenarios like these, the best bet for politicians who lose statewide elections but still aspire to national glory is probably to seek home state comebacks. Two recent Democratic presidential nominees used this formula: Michael Dukakis, who suffered a shocking primary defeat when he sought reelection in Massachusetts in 1978, only to win back the governorship in 1982; and Bill Clinton, who was defeated for reelection as governor of Arkansas in 1980, only to win that job back two years later. The Dukakis and Clinton examples are instructive. In their first terms, both men were regarded by their national party and by the media as up-and-comers. Then, in defeat, they were treated as has-beens -- only to be celebrated as reborn stars when they made their comebacks. Without those victories in 1982, Dukakis and Clinton would probably have never come within spitting distance of their party’s White House nod.

By some accounts, Santorum has found his post-Senate life to be oppressively boring. If that's the case, you can't blame him for running for president now. With all of the invitations to debate and to appear on television and to speak to Republican groups across the country, he surely feels more relevant than he has in years. But it’s an illusion. Because with Rick Santorum, there’s no comeback story -- just the memory of an ugly, lopsided defeat in a pivotal battleground state that has, until further notice, marked him as a loser.