What Tea Partyers ignore about the Founders 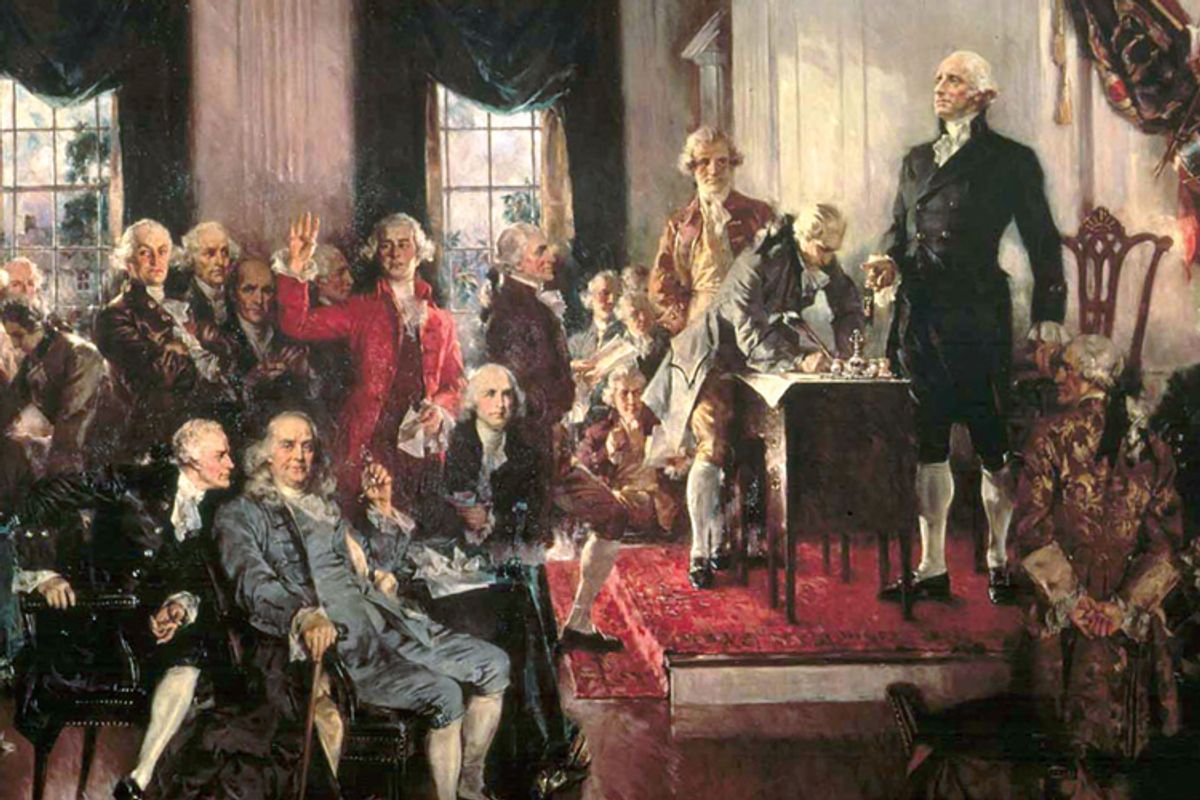 Anything but a lost, halcyon epoch of unity and consensus, our founding era saw deep, harsh oppositions among Americans over what kind of society our independence from England was meant to bring about. Like today, the direst political oppositions devolved on the economy, and on proper uses of public and private finance. From the North Carolina Regulation of the 1760s to the Whiskey Rebellion of the 1790s, Americans struggled mightily with other Americans over economic issues.

Though little-known, those struggles had decisive impacts on all of the famous moments in founding history. The Continental Congress’s adopting the Declaration of Independence occurred in the summer of 1776 only because those among the financial and political elites who wanted American liberty made secret, common cause with radical populists who wanted American equality. The Constitutional Convention’s proposing a national government in 1787 came in direct opposition to progress made by the radical democrats who promoted ordinary, working Americans over the high-finance investing class.

So it’s hardly surprising that those same struggles have critically important echoes and resonances -- if sometimes painfully dissonant ones -- for our bitterly divided politics and disastrous financial crises today.

Yet despite constant appeals to founding values by politicians and pundits across the political spectrum, a perennial American eagerness to avoid framing our founding period in economic terms can make it strangely difficult to keep those all-important 18th-century finance issues in historical focus. The Tea Party movement, for example, has laid its claim on the founding period, and to a great extent that claim is indeed an economic and financial one. Casting the modern welfare state as a form of tyranny, in large part because of what they see as its excessive taxation, Tea Partiers invoke the famous American resistance to Parliament’s efforts to raise a revenue in the colonies without the consent traditionally given by representation. Seeing founding-generation American patriots as unified against British taxation (and frequently misrepresenting the politics even of the elites they invoke), the Tea Party defines its own anti-government, anti-tax values as essential to American identity.

The Tea Party thus edits out an alternative view of government that prevailed among the ordinary 18th-century Americans who were all-important to achieving independence. Those Americans opposed elites epitomized by the Boston merchant class, which the Tea Party, perhaps appropriately enough, so strongly identifies with. The internal struggle for American equality was as important to the founding as the high-Whig resistance to England, but the Tea Party can’t deal with the populist leaders and militia rank-and-file who wrote the socially radical 1776 Pennsylvania Constitution, or the Shaysites of Massachusetts who marched on the state armory, or the so-called whiskey rebels who inspired federal occupation of western Pennsylvania. American Revolutionary patriots all, those democratic-finance leaders had ideas about government’s role in ensuring economic equality that prefigured programs of the 19th-century Populists and the 20th-century New Dealers, the very programs the Tea Party wants to dismantle. Tea Party history therefore has to expunge the welfare state’s roots in America’s founding.

Liberals, too, can have a problem with the economic conflicts of the founding period. Alexander Hamilton’s national finance program, which Madison and Jefferson opposed with such intensity, was economically regressive. Under the influence of the founding financier Robert Morris, Hamilton made a stunningly successful effort to yoke American wealth to great national projects by beating down the popular-finance movement and promoting the interest (in both senses!) of the high-finance elites. Yet when some of today’s liberals look to Madison for support in critiquing Hamiltonian finance, they come up empty. Madison’s attacks on central banking represented anything but an argument for democracy and economic equality.

In fact, the activist governing philosophy of national power that Hamilton espoused and Madison opposed gave precedent to modern liberal ideas about an energetic federal role in achieving social ends. Hamilton, not Madison, was in that sense the modern liberal, and the Hamiltonian influence on today’s liberal establishment can be seen in the Brookings Institution's "Hamilton Project" and Peter Orszag’s hanging of a National Gallery portrait of Hamilton in his office. That kind of liberalism makes Hamilton the author of using fervent support for Wall Street in hopes of benefiting Main Street.

There’s another kind of liberal history, leaning economically left, that prefers to trace a pretty straight line from Thomas Paine to Thomas Jefferson to Andrew Jackson to FDR, incorporating the labor movement along the way. It thus sees democratic, labor-oriented populism as essential to American founding values and coming to fruition throughout American history. In this view, the Declaration’s "all men are created equal" prophesied social progressivism (even if that’s not what the signers meant by it) and the Constitution’s "we the people" prophesied democracy (even if the document was specifically intended to prevent democracy). The Revolution is defined not by the split between, say, Hamilton and Madison but by the emergence of Jeffersonian and then, even more fully, Jacksonian democracy. The American people become in essence social radicals, and the development of social democracy, while embattled, becomes a natural project of America.

One problem with that view lies in its reliance on Jefferson and Jackson as socially progressive. The New Dealers did an amazing job of reinventing Jefferson as one of their own — they built him a monument and carved his face on the nickel and on a mountain; they put a statue of his Treasury Secretary Albert Gallatin at the front door of the Treasury (Hamilton, the department’s inventor, stands around out back). But it’s pretty funny to think of Jefferson as a patron saint of federal-government, welfare-state activism, and Jefferson’s attitudes about democracy are notoriously slippery and problematic. The sage of Monticello could wax romantic about small farmers, and he could get excited about radical uprisings (in Paris), but he wasn’t about to invite small farmers up his hill, and giving the proletariat of the American cities access to political power -- what Paine actually helped bring about in 1776 -- filled him with disgust and horror.

The Jackson era, too, by no means represented a triumph of the kind of economic equality espoused by Paine, Herman Husband, Thomas Young, James Cannon, and the democratic-finance populists of 1760s and 1770s. Modern forms of "consensus" history see Madison and Hamilton alike as being superseded by Jackson, who ushered in a rowdy, undeferential, dirty-boots, small-business capitalism, contrasted with the gentility shared by all of the famous founders, no matter their differences. That kind of capitalism was hardly what founding-era democratic-finance activists had in mind. The Jackson administration’s assaults on central banking may be read by social-democracy historians as a dismantling, at last, of the regressiveness of Hamiltonian finance -- but what began flourishing in the Jackson era can just as easily be read as fulfilling the diverging fears of those bitter enemies Paine and John Adams. Paine, desiring to re-order the world around a economic equality ensured by strong national government, would have been terribly disappointed by the cutthroat society emerging in Jackson’s America. And Adams’s warnings that democracy could only lead to machines, demagoguery, and party wars over political fiefdoms might as well have been describing the American politics that began with 19th century democracy.

Just as in Tea Party history, which sees the American people as essentially anti-government, an act of faith is required to see the American people as essentially socially progressive (or essentially anything). Both liberals and conservatives remain riveted -- hypnotized! -- by the big-name founders, from Madison to Hamilton to Adams to Jefferson to Washington to Franklin (with Paine sometimes thrown in because of "Common Sense"); they therefore remain locked in a fight over what those founders would or would not have supported today. Widening the lens to include the more ordinary likes of Cannon, Young, Husband, Christopher Marshall, Timothy Matlack, Robert Whitehill, and William Findley, among others who opposed American financial elitism in the Revolutionary era, challenges all sides of today’s political debate. Bearing down on the painful fact that a struggle over money, not ideas, marked every significant moment during the American founding can help enable new thinking about our struggles today.

The founding leaves us with questions about, not answers to, the kind of American economy we want now. In this series I’ve tried to raise some of those questions. This post is my last in the "Founding Finance" series. Writing it, and reading commentary on it here and around the blogs, has been a great pleasure. Thanks to Lynn Parramore (and to Bryce Covert, New Deal 2.0, and the Roosevelt Institute)! I hope these posts help frame an ongoing conversation about the strangely little-known, yet perennially resonant drama of American founding finance.

William Hogeland is the author of the narrative histories "Declaration" and "The Whiskey Rebellion" and a collection of essays, "Inventing American History." He has spoken on unexpected connections between history and politics at the National Archives, the Kansas City Public Library, and various corporate and organization events. He blogs at www.williamhogeland.com.