When it's an apology, and when it's a pander 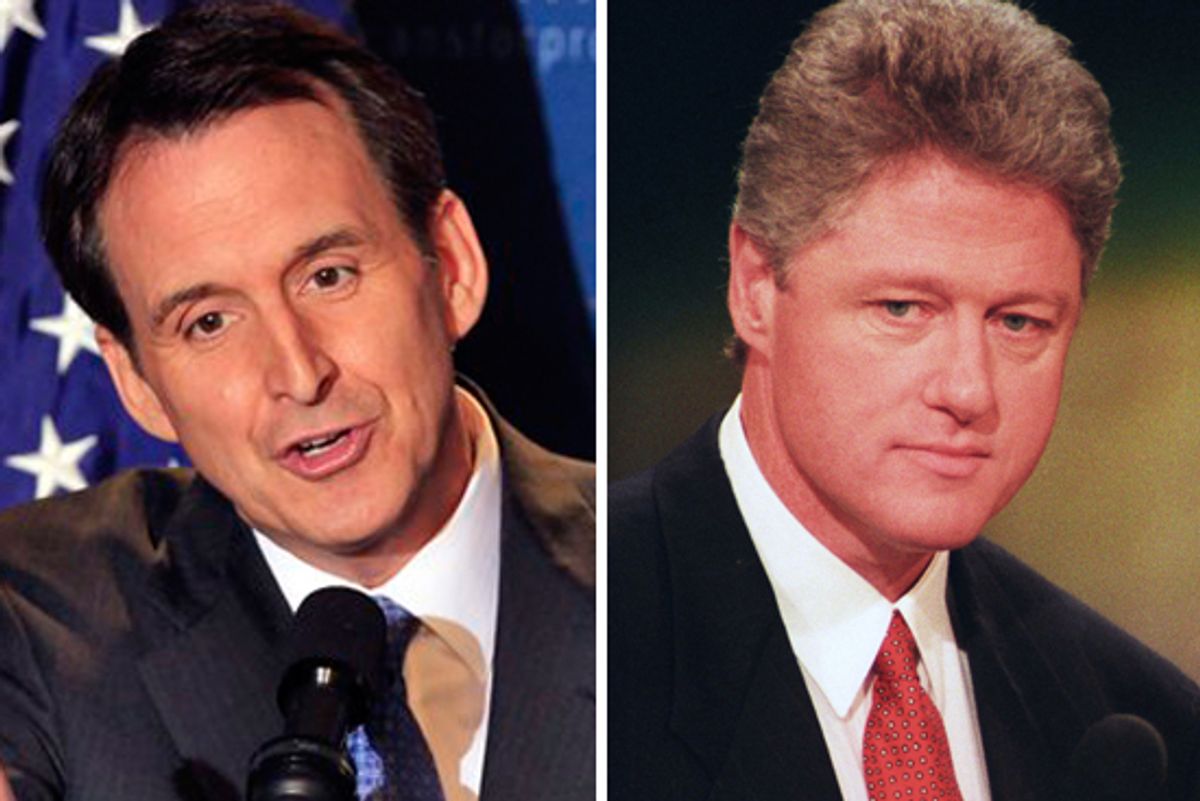 It's hardly unusual for a politician to offer an apology. Usually it's for some kind of personal shortcoming or for a "gaffe" of some sort -- an intemperate comment, maybe, or an off-color joke uttered into an open mic. It's also not unheard of to hear genuine contrition for being on the wrong side of an issue (even if this most often comes from retired pols who are suddenly mindful of the damage that a career full of pandering might do to their place in history).

But Tim Pawlenty, the former Minnesota governor who is trying very, very hard to win the Republican presidential nomination, reminded us last week of another type of politician's remorse: the pander disguised as an apology.

"I was wrong, it was a mistake, and I'm sorry," Pawlenty said during a debate last Thursday. He was talking about his previous insistence that greenhouse gas pollution is a serious problem worth tackling with cap-and-trade legislation. When Pawlenty first articulated this view a few years ago, it was a thoroughly mainstream sentiment, even within the Republican Party. Now it isn't. Why? Because with a Democrat in the White House, the GOP base now demands reflexive, unyielding opposition to any and all "Democratic" policies. Obama and his fellow Democrats support cap-and-trade -- therefore, the Republican base hates it. (This phenomenon is hardly new.) Thus, Pawlenty is now furiously apologizing for admitting that global warming is a serious, man-made problem that demands action.

What's more, he's betting that his willingness to say "I'm sorry" will provide a favorable contrast to Mitt Romney, who has thus far refused to apologize to Republican primary voters for the universal healthcare law he signed in Massachusetts five years ago -- which included an "individual mandate." Instead, Romney has framed the Bay State's program as an "experiment" that produced some good results and some bad.

He can't say it, but he's in the same basic jam as Pawlenty with cap-and trade: When Romney signed the Massachusetts law, the consensus that now exists in the GOP -- that mandates are evil, unconstitutional and freedom-killing -- didn't exist. Back in 2006, some conservatives felt that way, but many didn't and instead saw a requirement that individuals secure private insurance as something that encourages self-responsibility. At the ceremony marking the law's enactment, Romney was actually joined by a  representative of the fiercely conservative Heritage Foundation -- and a decade before that, numerous Republican senators had endorsed a similar mandate at the national level. It was only in the age of Obama that a health insurance mandate became synonymous with socialism.

It may be that Romney, who recently penned a book called "No Apology," is ultimately compelled to junk the convoluted cover story and offer the same kind of mea culpa that Pawlenty has. If he does, there'll be no more reason to believe he's sincere than to believe Pawlenty is. Both men are guilty only of pursuing reasonable solutions to serious problems -- solutions that became politically poisonous for them only because of their party base's blind, emotional resistance to a Democratic president.

We've see this kind of pander-as-apology before, of course. Perhaps the most famous recent example came from George H.W. Bush, who ran as die-hard tax-cutter in 1988. The strategy helped him keep conservatives in line in the GOP primaries (an ad that accused Bob Dole of being soft on taxes was key to Bush's New Hampshire primary victory) and paint his Democratic foe, Michael Dukakis, as a "tax and spend liberal" in the fall. But then, less than two years into his presidency, Bush cut a deal with Democratic congressional leaders and reneged on the "Read my lips: No new taxes!" pledge he'd made in '88, signing off on a plan aimed at reducing soaring deficits.

As the economy faltered in 1991 and 1992, it became an article of faith on the right that Bush's tax hikes had created a recession. (They hadn't, but that's not how the GOP base felt.) So as he sought reelection in 1992 (and faced a Republican primary challenge from Pat Buchanan), Bush declared that the tax hikes had all been a "mistake." In his acceptance speech at the GOP convention, the president called for a new round of tax cuts and once again sought to portray his Democratic opponent, Bill Clinton, as a tax-happy liberal.

Voters didn't buy it, though, and Bush was booted out. But years later, his tax hikes -- and those enacted in 1993 under Clinton -- ended up paying off, as the new rates brought in a revenue windfall in the boom years of the late '90s, leading to three straight budget surpluses. In hindsight, there really hadn't been much for him to apologize for (except, perhaps, making the "no new taxes" pledge in the first place). Nor was there anything for Clinton, who took enormous grief for his own '93 tax hikes, to apologize for. But that didn't stop the president from telling a roomful of wealthy donors in Houston in October 1995 that "You think I raised your taxes too much. It might surprise you to know that I think I raised them too much, too.''

Rest assured, that apology was just as heartfelt as Tim Pawlenty's.