"Bridesmaids": A triumph for vomit, and feminism 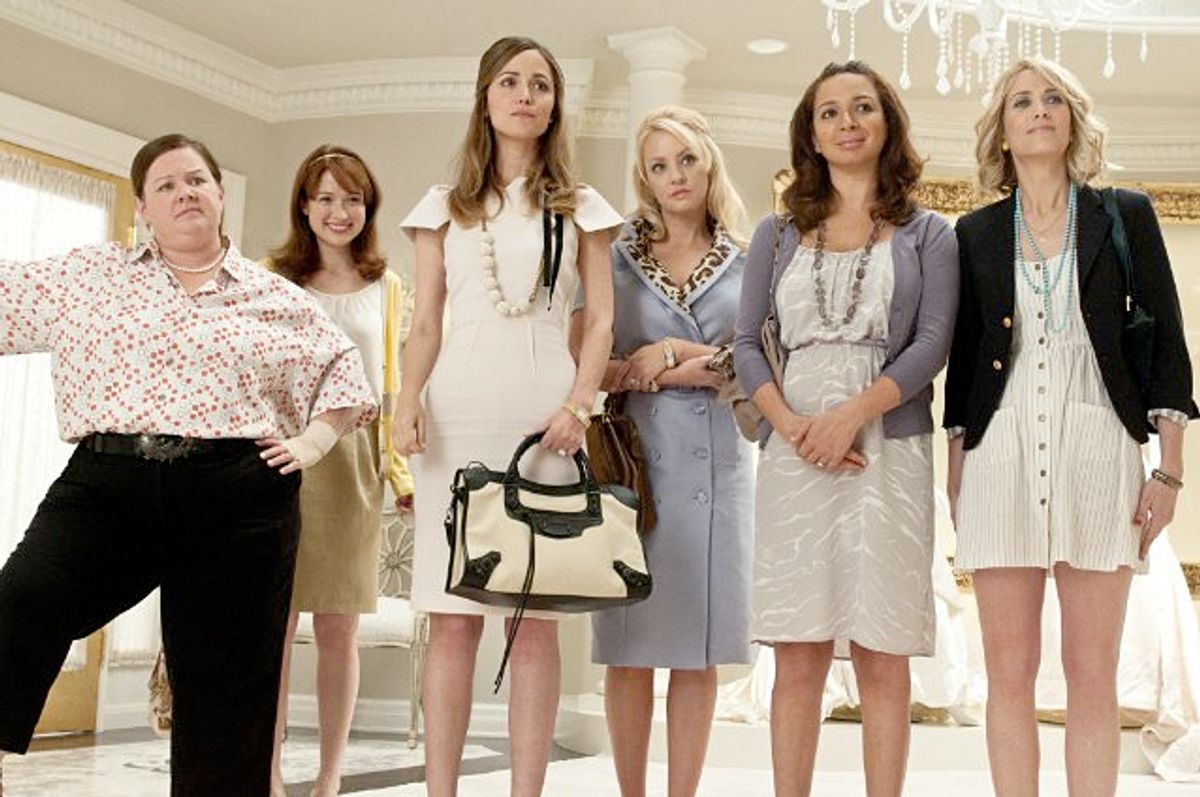 Meet "Bridesmaids," your first black president of female-driven comedies. Since its earliest gestation, the new bromance-but-with-chicks, "Bridesmaids," has been the subject of much speculation, hand-wringing, and pundit pondering over the state of -- and potential for success of -- funny women in show business. There's an awful lot riding on Kristen Wiig's slender shoulders. Industry insiders have publicly worried about what the movie's box office showing could mean for other similar projects -- as if the show business future of the entire gender is at stake.

With its ensemble of comedic powerhouse performers, vivid gross-out gags, and guy-pleasing team of director Paul Feig and producer Judd Apatow (whose collaborative history dates back to the still much mourned "Freaks and Geeks"), "Bridesmaids" has the sort of alcohol- and embarrassment-fueled concept that would be a box office no-brainer with a male cast. The last five years have been a bonanza for summery, vomit-flecked comedies with hearts of gold, from "Superbad" to "Knocked Up" to the sequel-spawning "The Hangover." But in all those films, women have been secondary players -- untouchable hot chicks, shrill mothers, redemptive catalysts for getting jobs and selling off action figures. Was it simply because, as Christopher Hitchens once suggested, women just aren't funny? Or was it something else: Hollywood's fear that audiences don't want to see women behaving like buffoons when they could watch Kate Hudson or Katherine Heigl pining for some lovable rogue?

Judd Apatow has in recent years come under intense criticism for his alleged lack of sensitivity to females and their capacity for depth, nuance and poop jokes -- notably from his "Knocked Up" star Katherine Heigl, who famously called him "a little sexist" in Vanity Fair. But Apatow's problem never seemed to be traditional sexism. The trouble was more in his exaggerated idealization of women, a common sentiment that's reflected in every glowingly Photoshopped magazine cover, every romantic comedy in which Ginnifer Goodwin or Amy Adams plays the fussy, uptight plain one. It's the exhausting expectation of unmessy perfection. And that fear is there in Apatow's admission regarding "Bridesmaids" that "We certainly had some real debates about whether we were drifting into territory we should leave to the men [with the movie's gross-out humor]." Women, in movies as well as real life, frequently have to fight their way off the pedestal.

It's a pervasive conceit, this idea that ladies, even very funny "Saturday Night Live" veteran type ladies, should not sully themselves in the muck of fart jokes. Yet if you've ever had the pleasure of spending any uncensored time in the company of women, you know that to be female is to be deeply enmeshed in the viscera of life. Apatow frets over what might be "best left to men"? Did he forget the experiences of his own comic actress wife, Leslie Mann, in bearing him two children? Womanhood (and motherhood in particular) is all about having people puke and poop and blow their noses on you, about bleeding for a week every month, and, as "Something About Mary" proved, occasionally wearing ejaculate in your hair.

How brutally refreshing, then, that within the first five minutes of "Bridesmaids," Kristen Wiig's hapless Annie has already had terrible sex with a cluelessly rutting Jon Hamm, and delivered a perfect imitation of a penis trying to finagle a blow job for her best friend Lillian (Maya Rudolph). How encouraging to hear the screening audience howl with laughter.

Annie is, in the words of her AA-espousing mother (played by the lovely Jill Clayburgh, in her final role), a woman hitting bottom -- a terrain that just keeps sinking lower and lower as the film progresses. Her bakery business has gone under, her boyfriend has split, she's in a thankless booty call arrangement with Hamm, and she's got a sullen, deeply weird pair of roommates. Then things get really bad: Lillian gets engaged, and wants Annie to be the maid of honor.

What follows next, from Wiig's verging-on-hysterical reaction to her friend's announcement to the endless checkbook- and spirit-punishing indignities of planning Lillian's wedding, are the kind of high farce that could go toe-to-toe with anything Zach Galifianakis has suffered cinematically. In an already much-talked-about scene, the wedding party goes to an expensive bridal boutique -- and promptly gets hit at both ends with an explosive bout of food poisoning from the divey restaurant Annie took them to. It's a scene that wouldn't be out of place in a male buddy picture, except that the gastrointestinal horror is made even funnier by the fact that it's afflicting a bunch of women in pretty, expensive dresses. Throughout, women get drunk and behave very badly -- and then up the comic ante by crying like a bunch of girls. Your move, Seth Rogen.

The cast isn't just a pack of Jonah Hills with breasts. Wendi McLendon-Covey plays an exasperated mother of three boys who complains that every surface of her home is covered in semen, and Rose Byrne plays the too-rich, too-perfect rival for Lillian's BFF. She's an antagonizing Little Mrs. Perfect who drives Annie to spectacularly ruin every nuptial-related event, from a bridesmaid's toast to a blowout trip to Vegas to a Parisian-themed shower in which every guest gets a beret-wearing puppy. All of the women, including Melissa McCarthy's dirty-mouthed, overconfident sister-in-law to be, are over-the-top in their own ways, but somehow their chemistry keeps the movie grounded in painful truth.

And at the center of the action is Wiig herself, the star and co-writer (with her friend and Groundlings alum Annie Mumolo). As the loserish, pity party-throwing Annie, Wiig gives a gutsy, ego-free performance. Her Annie isn't some glam Hollywood version of what an underemployed Milwaukee baker would look like; she's a woman with perpetually smeared makeup and a wardrobe that only wishes it was good enough for the clearance rack at Dress Barn. Her car is a filthy wreck and her career ambition has died with her bakery. Her Annie is so used to being treated badly that when she hooks up with a sweet highway cop, she apologizes for spending the night and rushes out the door -- a woman who's settled for cheap male "honesty" so long she's forgotten how to accept a real man's kindness.

"Bridesmaids" is not a perfect comedy; there are gags that run on for too long, including an agonizing airplane scene. And in a movie that may prove a benchmark for female comedy, it's ironic that the filmmakers made Annie a baker who has to get her groove back by returning to the kitchen. (To quote Wiig's former "SNL" castmate Amy Poehler: Really? Really?) But the script, which underwent heavy tweaking from Feig and Apatow (including that colorful food poisoning scene) benefits from their hands in it. The movie has the sweet sadness we've come to expect from the Apatow entertainment complex, a heartfelt sincerity that rides in on a wave of blow-job jokes. When, halfway though the movie, Wiig's character, working in a jewelry store, bitterly refuses to sell a "best friends" necklace to a teenage girl, it's so funny it's heartbreaking. Annie and Lillian are like all great friends who find themselves at a life crossroads. They share the desire to remain close and the dread that they won't. And Wiig and Rudolph have such easy chemistry it's hard not to wish they were together more in the movie, even if their distance reflects Annie's terror of estrangement.