Do we need a new Bible? 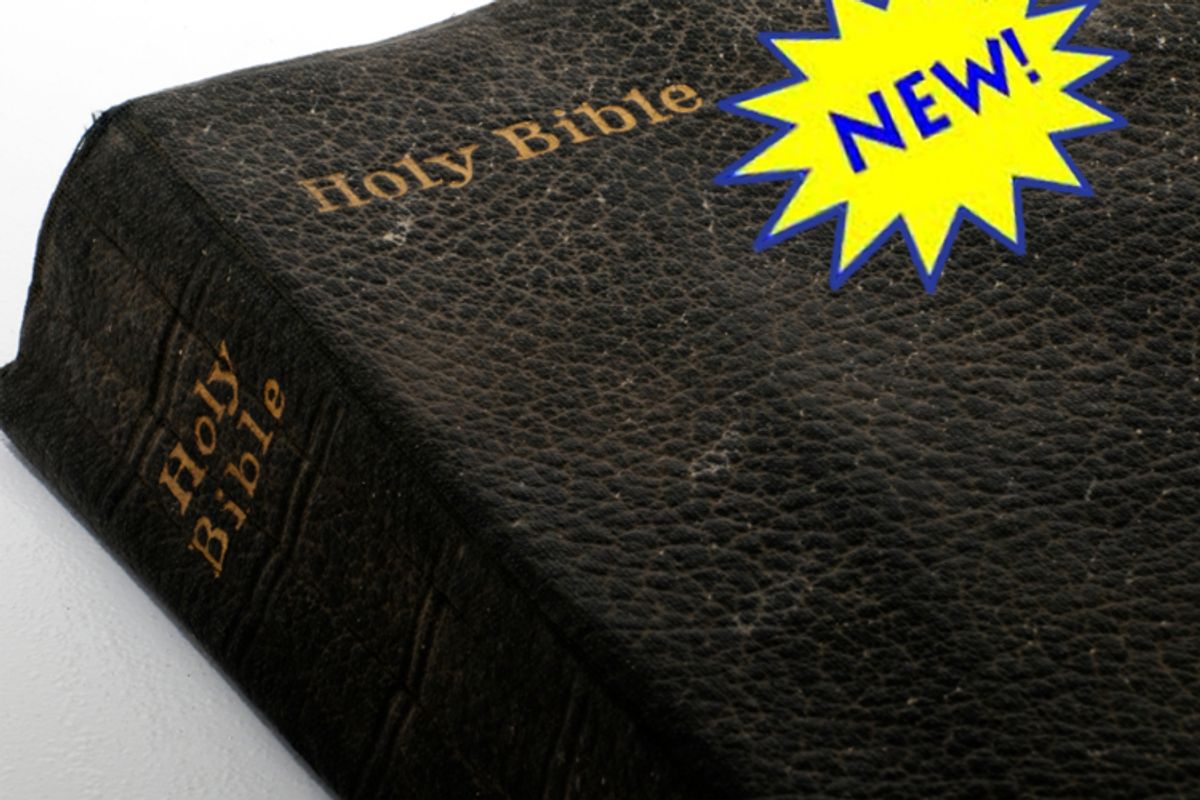 A.C. Grayling, a British professor of philosophy, recently published a secular version of the Bible, "The Good Book: A Humanist Bible."  To create his scriptures, Grayling has rewritten thoughts from many sages of the past in archaic language that evokes the King James Bible. His humanist Bible has sections titled Genesis, Proverbs and Epistles.

Not having read "The Good Book," verily will I not pass judgment thereon, although I note that Grayling certainly appears to be qualified for the job he has taken on, to judge from his nimbus of prophetic silver hair in his publicity photos.

He is not the first philosopher to have used faux-scriptural language to package his own non-Christian teachings. Friedrich Nietzsche, who also had prophetic hair, and a prophetic mustache, too, did the same thing in "Thus Spoke Zarathustra: A Book for All and None" (1885). I have read that book, and do not recommend the experience to others. (I do, however, recommend the tone poem that it inspired in 1896, Richard Strauss' "Also Sprach Zarathustra," which provided the recurring theme of Stanley Kubrick’s and Arthur C. Clarke’s "2001: A Space Odyssey.")

Clearly the use of stilted, archaic language helps, if you want people to read your new Bible. It also helps if you are from the "Orient" -- the Middle East or South or East Asia. The combination of those factors probably explains why the Lebanese-American Kahlil Gibran’s "The Prophet" (1923) has never gone out of print and can be found in the New Age or religion section of every major bookstore. Had "The Prophet" been written by a German-American from Wisconsin named, say, Fred Dorfmueller, it just wouldn’t have been the same, even if all the words had been identical.

If you doubt me, consider the fact that the writing of the brilliant German-American poet of Nebraska, John G. Neihardt, has been forgotten outside of the Great Plains, with the exception of "Black Elk Speaks" (1932), a mystical prophecy by a Sioux wise man heavily rewritten by Neihardt. "Black Elk Speaks" has also never gone out of print and is found on the New Age shelves near "The Prophet."

The desire to promote a different message by means of familiar biblical language or imagery is not the only reason why you might write a new Bible. James Lovelock, the British scientist who proposed the Gaia hypothesis, holding that the biosphere is a self-regulating system, has grown pessimistic about the chances that civilization will survive global warming and has proposed that a book of knowledge be widely distributed, so that it can be rediscovered after a future Dark Age. A better model than the Bible for such a book of knowledge, made of durable materials and written in several languages, might be the Boy Scout and Girl Scout handbooks, which contain instructions for everything from tying knots and treating wounds to morals, manners and politics.

Lovelock’s idea was anticipated by the Westinghouse Corp., which in 1939 during the World’s Fair in New York planted a time capsule

under a cement seal on the fair-grounds, where it remains to this day, unless it has been vandalized. The time capsule was not to be opened for five thousand years. If there are indeed people who will open the time capsule in 6939 A.D., they will discover, among other items, the Book of Record of the Time Capsule, which contains instructions in the pronunciation of English and messages from, among others, two prominent expatriate Germans, the novelist Thomas Mann and the scientist Albert Einstein, a fact which in itself, I think, shows the difference between Franklin Roosevelt’s America and Adolf Hitler’s Germany.

Our time is rich in inventive minds, the inventions of which could facilitate our lives considerably. We are crossing the seas by power and utilise power also in order to relieve humanity from all tiring muscular work. We have learned to fly and we are able to send messages and news without any difficulty over the entire world through electric waves. However, the production and distribution of commodities is entirely unorganised so that everybody must live in fear of being eliminated from the economic cycle, in this way suffering for the want of everything. Further more, people living in different countries kill each other at irregular time intervals, so that also for this reason any one who thinks about the future must live in fear and terror. This is due to the fact that the intelligence and character of the masses are incomparably lower than the intelligence and character of the few who produce something valuable for the community. I trust that posterity will read these statements with a feeling of proud and justified superiority.

Another motive for writing a new Bible is patriotism. In the 19th century, there were three interesting attempts to give America its own Bible.

One was the Book of Mormon, which, in pastiche King James Bible English, tells the story of how North America was colonized in ancient times by a group of ancient Israelites, whose descendants, following the collapse of civilization, became the American Indians. The Book of Mormon also answers the question of where Jesus went after the Ascension. It turns out he was on a speaking tour in ancient North America, which was populated at the time by Jewish tribes -- Nephites, Lamanites, Jaredites -- who sound like rival socialist factions at City University of New York in 1936.

We know all this to be true because it was engraved in Egyptian characters on golden plates that were buried in a hill in rural New York until they were discovered near his home by Joseph Smith, who published his translation in 1830. He was helped in the discovery and translation by an angel named Moroni, who, conveniently, it must be said, insisted that the golden plates be returned to him when the translation was finished, making it impossible for skeptics to examine them.

I have no idea what Jews make of the idea that the Navajo are their long-lost cousins, nor do I know what native Americans think of the idea that they can invoke the right of return to modern Israel. For what it is worth, I have always thought that the Book of Mormon would make a great heroic fantasy movie. Ancient Hebrews with swords battling each other on Aztec-style pyramids in the American West, that sort of thing. Moroni, call your agent.

Another 19th-century attempt to create an American Bible was Walt Whitman’s "Leaves of Grass." As Whitman would have insisted, he was not a traditional poet, like Longfellow, Frost and Wilbur. Whitman thought of himself as a prophet. His ever-changing, protean poems are the scriptures of a distinctive New World romanticism.

The third attempt to create an American Bible in the 19th century was the earliest: Thomas Jefferson’s "The Life and Morals of Jesus of Nazareth." Jefferson whiled away the hours in the presidential mansion using a razor to cut out all the supernatural stuff from the Gospels and pasting the remaining verses together to create a secular story of Jesus as a purely human sage. Apparently American presidents were less busy in the early 1800s.

Jefferson never dared to publish the book, but he shared copies with friends. In a letter to another former president, John Adams, Jefferson wrote:

And the day will come when the mystical generation of Jesus, by the supreme being as his father in the womb of a virgin will be classed with the fable of the generation of Minerve in the brain of Jupiter. But may we hope that the dawn of reason and freedom of thought in these United States will do away with this artificial scaffolding, and restore to us the primitive and genuine doctrines of this most venerated reformer of human errors.

If, like Jefferson, I were to edit the Bible, I’d be inclined to throw out a lot, too, though I’d keep the tale of Joseph and the Book of Ecclesiastes. Ecclesiastes, by the way, contains a verse that should be pondered by anybody who is thinking about writing a new Bible:

Ecclesiastes 12:12: ... of making many books there is no end, and much studie is a wearinesse of the flesh.