The man who inks with his own blood

We talk to a taboo-busting French designer who melds death metal, Satanism -- and great art 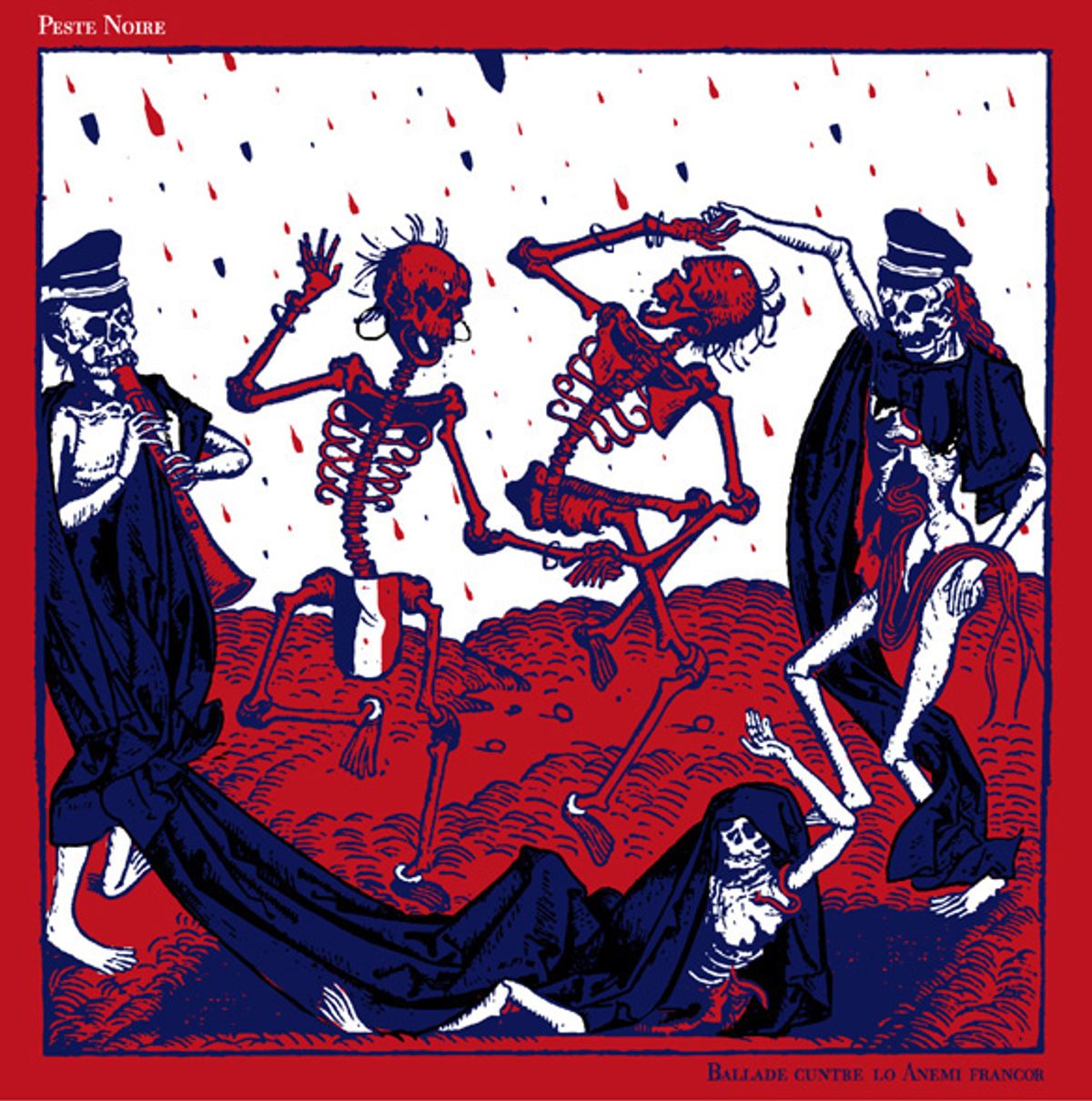 A while back Steven Heller wrote a piece for Imprint about a designer so committed to his craft that he used his own blood as ink. Recently I happened to meet that man in person, one Jean-Emmanuel "Valnoir" Simoulin, and after chatting with him for a while, it struck me that working with his own blood might be the tamest thing about him.

Valnoir, proprietor of the Paris-based design firm Metastazis, is one of the most peculiar and compelling characters in the design world I've had the good fortune to meet. From the first page of his website (which directs prospective clients to "give yourself the worst") to his brilliant work with primarily black metal bands (you'd be surprised how many of them there are), to his stated refusal to compromise on anything, you're unlikely to meet anyone in the industry more honest, opinionated or, for that matter, talented.

We sat down a few weeks back over some drinks (only red wine for him) to talk about whiny clients, all-night parties, Goth chicks, the neo-folk scene and the devil.

Your tag line is "Give yourself the worst." What does that mean?

It is a satire of the usual self-glorifying promotional messages our society is fond of. Such as "Choose us, we are the best." Metastazis' motto is based upon opposition, vice and negativity. We do our best to master those fields. We say out loud that we are the best of the worst: "Choose us, we are the worst." Not the worst when it comes to quality but when it comes to morality. Making good is not fun, nor natural or captivating. Try to throw a party from 4 p.m. to 10 p.m. serving only water, lettuce and tofu. An interracial party respecting ethnic quotas, at that. Where a DJ would play Christian rock and everyone would indulge themselves in self-criticism while children braided crowns of flowers. You know what a party of goodwill without vice would look like? Like a fucking sect. I am trying to do the opposite with design: noise, cynicism, coke and whores. And somewhere above the polar circle so that the party would last for four months without sunshine.

You have an interesting company credo that essentially tells prospective clients that it's your way or the highway and that they are forbidden from criticizing your work. How's that working out as a business development strategy?

Saying it is a business strategy would be inappropriate. I wrote this manifesto after a clash with a shitty client who degraded my work. I wrote it at the time as an insult letter or as a lynching notice for my worst enemy. It was pure rage. Then I realized it contained the values I wanted to stand for. Showing disrespect towards my work or choices is the same as spitting in my face while calling me an incompetent. It had to never happen again. What was meant to scare away crowds ended up having two advantageous consequences. First it became a filter, it kept away people I would have had problems cooperating with, the kind of people I was now trying to avoid. It gave me this engaged and aggressive posture of inflexibility and integrity, which touched many artists sharing my point of view and values. There are lots of them, especially in the so-called extreme scenes I enjoy working for.

Can you tell me about those scenes?

Eighty percent of my clients are related in one way or another to the black metal and industrial scene. Black metal was born in (mostly northern) Europe in the early '90s and is famous for its insane musical agressivity and the radicalism of its anti-Christian beliefs that many times lead to acts of terrorism, murders, church arsons, desecration, etc. ... See: Antaeus, Watain, Taake, Peste Noire.

The "industrial" is a bit more vague. The artists I work with mostly belong to two subgenres: the noise scene, where maximum volume yields maximum damages, and aesthetics can be shared between political authoritarianism and anarchic violence. See: Melektha, Zweizz, (old)Laibach.

The neo-folk scene: apocalyptic visions of the death of European culture, national-romanticism and occultism. Has a bad reputation due to its "anti-democratic" aura, that is most of the time a misinterpretation of the usual fascist boys kitsch aesthetics you can easily meet there. See: Der Blutharsch, Dernère Volonté, Arditi.

Has anyone every criticized your work and then you thought, "Shit, they're right"?

Yes, of course. But accepting criticism when it is unjustified is stupid. It is one of the terrible directions our modern society is taking where democracy has given everyone and anyone the conviction that their opinion was worth the opinion of an expert. However, I do not decry criticism in itself. My radicalism stops when I face someone with a strong and coherent point of view, based upon fair and reasonable visual desires. In that case I enjoy sharing ideas and listening, it's rewarding. This almost never happened before I set up the filter on my website, when I worked with anyone, but now it's more frequent. Thank "god."

At first glance your work can seem dark but there is also a lot of humor in it (and your writing). How much of what you do is supposed to be funny?

What we learn in school is "Humor makes your brand look cool." I try to make your brand unpleasant through humor. The big issue with the musical scenes I work with is that they take themselves far too seriously, to the point that you can't take their message seriously. Worse, they fall into salacious and nasty jokes. Humor will make your message credible, human, and will bring people to reflection much more than a terrifying manifesto about the end of the world written in old Romanian. The core of the messages my work propagates is often a very important and serious message. But the way I illustrate it often plays on what used to be called "second degree" in French. Something that Americans absolutely can't grasp. It's like pretending to take yourself exaggeratingly seriously, but deep down you are laughing out loud because it's a huge joke, which makes everyone uncomfortable. It's a kind of humor that requires a good analytic mind but I'm practicing a lot, especially when using graphical elements derived from totalitarian inspirations.

What kind of clients do you look for?  Who would you absolutely not work with?

Outside of Metastazis I can have a pure moneymaking approach (I am a mercenary and the price of gold helps facilitate most things). However, I won't work for anyone asking me to betray my own values, ideas or style. I highly doubt that an extreme Jewish or Islamic (Christianity is dying in old Europe) group will ever come up to me. If it ever were the case I wonder if I would not accept if only to make their project fail. I would avoid hysterical vegan groups, modern trends of art with a stupidly internationalist and positive vision, whales' defense leagues, ranting leftists, wimping rightists, sects (non-suicidal). And any (suicidal) individual willing to direct my work without having the qualifications ("please change the typo," "I don't like it, please use Comic Sans MS instead".) Those will burn first when I am given the power to reign through terror.

What is your idea of a perfect project?

An exciting and demanding project that would have me push my limits, serving an action, an institution, or a beloved artist. The technical means to do so: without limits. With a worldwide visibility and a compensation to match. Strength, beauty, glory and money. After we die, nothing lives on except concrete nothingness. That's why we have to live up to expectations of intense and extreme joy.

Do you feel like you constantly want to push the boundaries with design? After screen-printing with your own blood , what's next?

Considering that there are limits to be pushed leads to thinking that there are limits indeed and that it means we have a strictly delimited mind. When I made this print I did not think "Here is something that will revolt the petty-bourgeois." I just thought it would make sense to print with human blood the poster of a band worshiping death so authentically, that's it. People who find it offensive are just limited by their Judeo-Christian formatted mind. My work is not for them. I realize it was an unusual, intense and maybe even surprising gesture but it was not provocation. I am past that kind of immature state. Now, I'd like to have even more surprising ideas, but that sort of project can only be spontaneous, for fear of becoming a parody of yourself.

What is the general reaction to your work by the French design industry?

Rejection. It's been a while since I left the traditional communication world. I'm too old to sell sofas, diapers, razor blades or all this disgusting crap and pretend I enjoy what I'm doing. It was a disadvantage for a long time, this industry is based upon compromise and I hate it. I refuse to be told how to choose a typeface and how to compose a poster by a stupid commercial manager or worse, by a marketing manager. Do I explain to my butcher how to chop my meat? No wonder why we are surrounded by hideous visual and conceptual elements. We let ignorants decide for us what is beautiful and what is not. With that kind of conviction you understand why the small brat just out of business school will consider me a hiring risk. This industry destroys your soul and creativity.

As to the French design community in itself, I probably don't even exist for them and I don't care, I'm not interested. You have on one side the consensual hipsters and on the other side the politically correct and spineless Old Guard. I only feel at odds with both sides. They have lost the fury necessary to create powerful design.

You once described yourself to me as a Satanist. How would you say that influences your design?

I don't like those "-ist" words. But I have to admit I can sometimes use this term to describe myself. It partially represents an important section of the ideas and values I defend. Rejection of Christian values, individualism as a cult, resorting consciously to violence and revenge, welcoming destruction in itself, my prurient vice towards drunken young Goth chicks in fishnet tights, or a definite taste for rare meat. I am fundamentally an atheist, and Satan is an anti-religious metaphor opposed to the whole value system laid upon us by the Judeo-Christian civilization. This comes up in many sides of my work. I like to contest, to blaspheme (religiously or socially), to generate conflicts, awkwardness, doubts and anger through my work. I find it constructive. And hilarious. Nothing strong or entertaining has ever been created without frictions, conflicts or crises. To quote Gide: "Good feelings make bad literature."