Not all blemished GOP White House aspirants were created equal 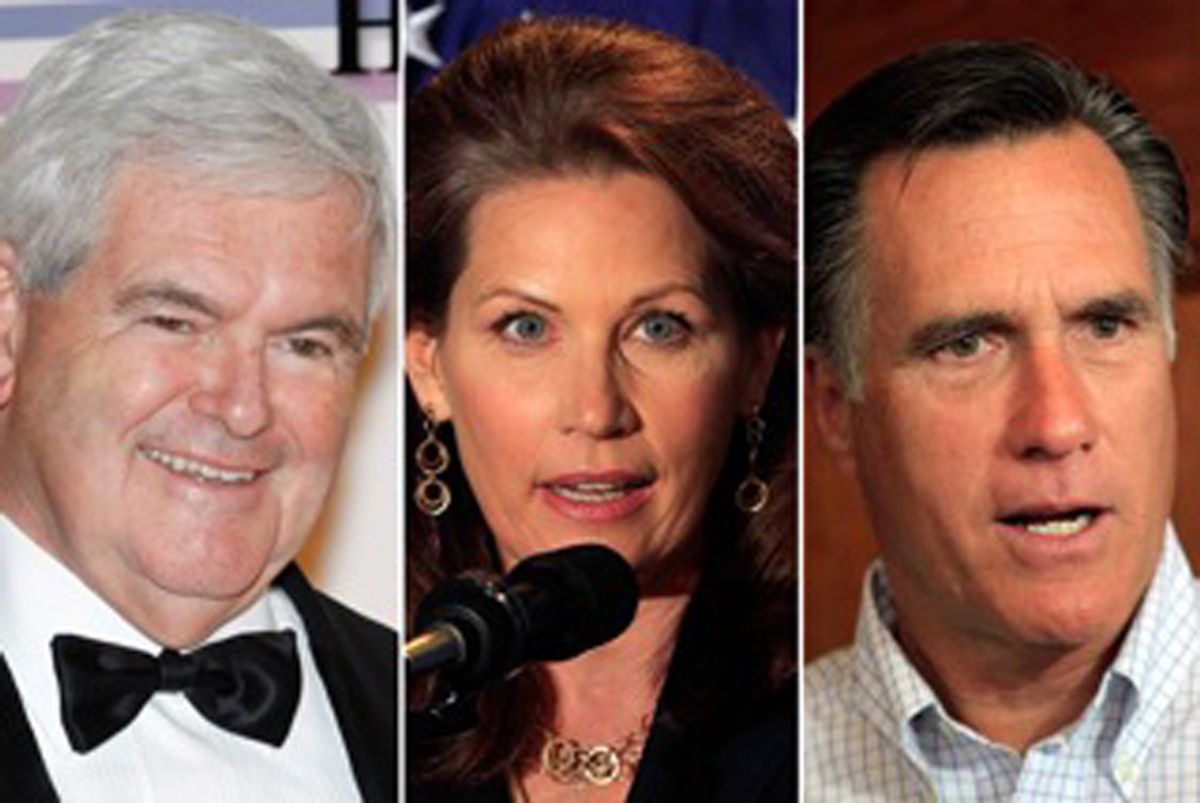 First Read, the daily tip sheet from NBC's political unit, notes this morning that every 2012 Republican candidate is in some way "flawed." Which is true enough. But in handicapping the GOP field, it's important to recognize that the term "flawed" can have two very different meanings.

For instance, First Read points out that Mitt Romney's flaw is healthcare; he championed Massachusetts' universal coverage law, which contains an individual mandate, something that the right recently decided is tantamount to socialism. (Romney will try yet again to present satisfying healthcare talking points to the right in a major speech on Thursday.) And Tim Pawlenty's flaw is that he's a "a former Minnesota governor most Americans have never heard of (and when they have, he gets overshadowed by others)," while Jon Huntsman's is that he "faithfully (and uncritically) served in the Obama administration" (as ambassador to China).

What do these flaws have in common? They really only matter within the Republican Party.

Take Romney. The Massachusetts healthcare law is, of course, an enormous obstacle in his quest to win over conservative activists and opinion-shapers. His struggle calls to mind John McCain's in 2007, when the Arizona senator's campaign nearly imploded thanks in part to his support for comprehensive immigration reform. But if Romney can convince enough GOP elites to give him cover on healthcare (and it's entirely possible that he will), then he can still win the nomination -- and at that point, his healthcare past really won't matter anymore. Sure, Democrats would use it to paint him as a flip-flopper in the general election, but Romney -- barring some major, unforeseen scandal -- is probably a generic enough political figure that he'd receive whatever the "natural" level of support for a Republican candidate in '12 ends up being. In other words, as the GOP nominee, his fortunes would be tied to the economy; if it's as bad as it is now (or worse), he'd be well-positioned to win, even if voters conclude that he's a flip-flopper. It's the same formula that Bill Clinton -- who was widely seen as as an untrustworthy "pander bear" in 1992 -- used to unseat George H.W. Bush.

The same, roughly, is true for Pawlenty. His tendency to blend in with the furniture is a problem now, as he tries to stand out from his fellow Republicans and build excitement among influential party leaders, activists and commentators. (His past support of cap-and-trade, for which he's now aggressively apologizing, could also hinder him in this regard.) But if he were to secure the nomination, this trait would probably be helpful. The less edgy and polarizing next year's GOP nominee is, the easier it will be for him or her to take advantage of rotten economic conditions (if they exist) and unseat Obama. Ditto for Huntsman: Republicans may hate the idea that he accepted an ambassadorship from Obama, but general election voters won't care (and if anything, they'd probably like him more for it).

Then there's the other kind of "flawed" candidate -- the one whose personality and/or ideology is so flighty and extreme that nominating him/her would have potentially serious general election consequences. The prospective GOP field contains an unusually large number of these candidates: Michele Bachmann, Newt Gingrich, Rick Santorum, Herman Cain, Ron Paul, Gary Johnson, and even Sarah Palin (and, if you feel like including him) Judge Roy Moore. These candidates are flawed in far more serious ways than Romney, Pawlenty, Huntsman (and Mitch Daniels, for that matter). We've seen how they can cost the GOP winnable elections before -- just look at what happened with Christine O'Donnell, Sharron Angle and Ken Buck last fall.

The distinction between the two meanings of "flawed" is worth keeping mind when you read the rest of First Read's take on the GOP field:

Of course, flawed candidates always have gone on to win the White House. The winner in 1992 (Bill Clinton) was the governor of a small state who had a, well, colorful past. The winner in 2000 (George W. Bush) overcame doubts about his knowledge of world affairs, as well as booming economy under a Democratic administration. And the winner in 2008 (Barack Obama) triumphed despite questions about his experience and his worldview.

Of this group, though, only Clinton ever seemed at risk of suffering serious November consequences for his flaws. When he emerged as the likely Democratic nominee in '92, he was weighted down by scandal -- Gennifer Flowers, draft-dodging, marijuana -- and his personal popularity and trustworthiness scores in polling were dismal. The press -- and many leaders of his own party -- treated Clinton as a sure November loser, and polls in the spring of '92 had him falling desperately behind Bush and Ross Perot in three-way match-ups, struggling to break 20 percent. For a variety of reasons, Clinton ended up turning things around and winning with ease. But Bush and Obama? Sure, there was plenty of talk that their flaws might hurt them with swing voters, but polling data never really backed this up. From the spring of 2000 on (with a brief interruption in early September), Bush consistently led Al Gore -- just as Obama held a steady advantage over John McCain in 2008.

So First Read is right: Every GOP candidate certainly has some flaws. But for those who have the best chance of securing the nomination, they are flaws that won't matter in the fall of 2012.