He hasn't announced his candidacy, but a right-wing group is already attacking Newt's record on climate change 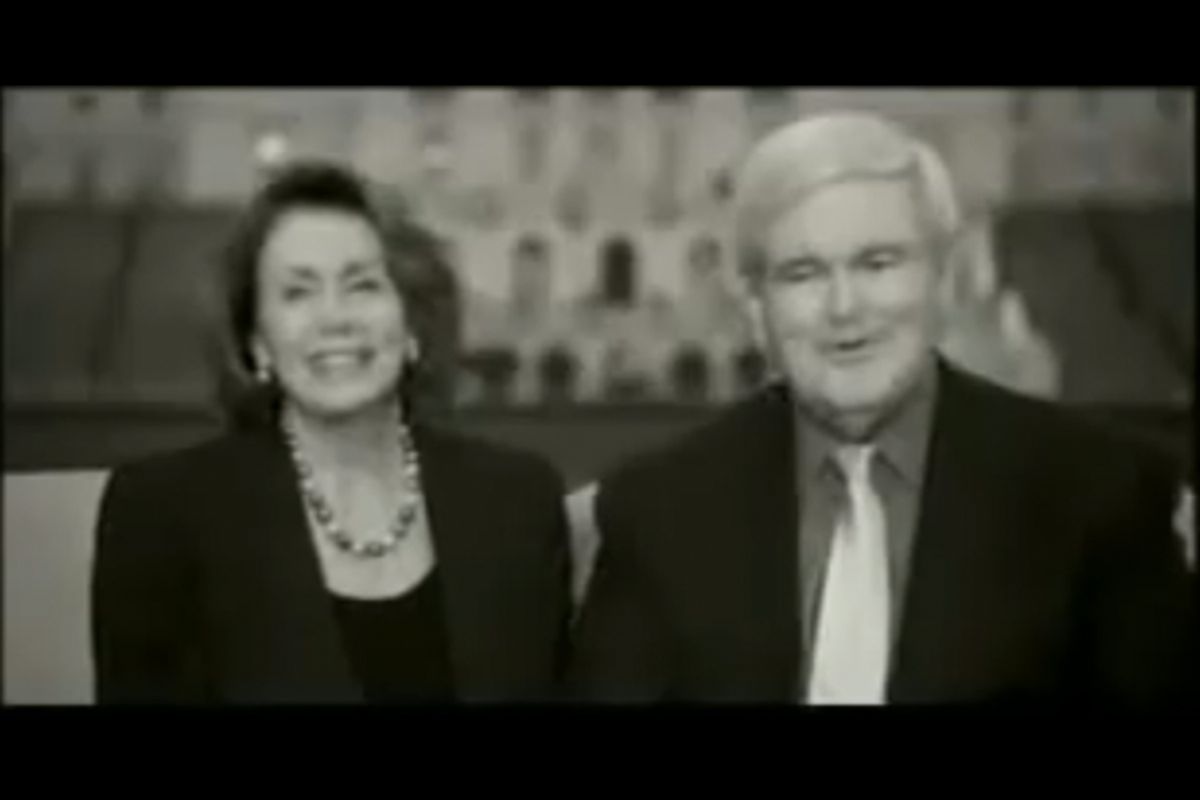 Nancy Pelosi and Newt Gingrich in a 2008 climate change ad.
--

At the first GOP debate the other night, Tim Pawlenty had to issue an abject apology for having previously supported a cap-and-trade system to address climate change.

Many of the other Republican presidential candidates also supported cap-and-trade -- which is now verboten in GOP circles -- at one time or another. But the candidate for whom environmental issues present the biggest liability is Newt Gingrich. In fact, he is already under attack by an anti-environmentalist, anti-regulation group, the American Tradition Partnership.

"It's already a serious problem. It's something he's going to have to answer for and be accountable for," American Tradition Partnership director Donny Ferguson told me.

I first encountered ATP at the Conservative Political Action Conference back in February, when the group distributed toy gel lizards to reporters ("Power-Grabbing Newts") along with pamphlets of Gingrich quotes culled from his books, including 2007's "A Contract With the Earth." (Salon's Q&A with Gingrich about that title, in which he describes himself as an environmentalist, is here.)

Here's a sample of ATP's oppo research on Gingrich, which, Ferguson stresses, "uses his own quotes from his own three books."

CREATE GLOBAL SPENDING REGIMES: "If the United States challenged Europe and Japan to join it in financing a world biodiversity refuge system and tied foreign aid into the process of maintaining biodiversity, we could probably save a very high percentage of the earth’s biological richness…" Newt Gingrich, "Winning The Future," Pages 170-171

NEWT WANTS TO BRING BACK CARTER ENERGY POLICIES: "America used to be that kind of government [that spent millions of tax dollars on 'energy research' welfare programs,] but our commitments have wavered in recent years so government incentives for energy research will be issues in future political campaigns." Newt Gingrich, "A Contract With The Earth," Page 167

With the news this week that Gingrich is likely going to become an official candidate, ATP congratulated him on "announcing his Democratic bid." Ferguson tells me ATP plans to keep the pressure on and is focused right now on educating GOP primary voters about Gingrich's history of "using the environment as an excuse to pursue higher taxes and bigger government."

Ferguson says that ATP is funded by small grass-roots donations. That's impossible to verify because the group is organized as a 501(c)(4), meaning its donors are anonymous. He says he is based in northern Virginia and the group is incorporated in Colorado, where its Western Tradition Partnership branch has been accused of being a "front group" for energy interests. It is clear that Western Tradition Partnership has deep ties to state Republicans. The group has recently been active advocating for Sen. Rand Paul's anti-regulation REINS Act.

The centerpiece of any move against Gingrich on climate and environmental issues will be this 2008 ad costarring Nancy Pelosi.

As recently as January, Gingrich was standing by that ad, telling an interviewer, "I meant exactly what I said."

The irony of the right-wing attack on Gingrich is that, while he does talk about the environment, he's hardly a lefty on the issue. He favors, for example, replacing the Environmental Protection Agency. And his American Solutions outfit has taken huge donations from corporate energy interests. But in the context of a GOP primary, there's little doubt that Gingrich's history of talking about the environment and climate change is going to be a problem.