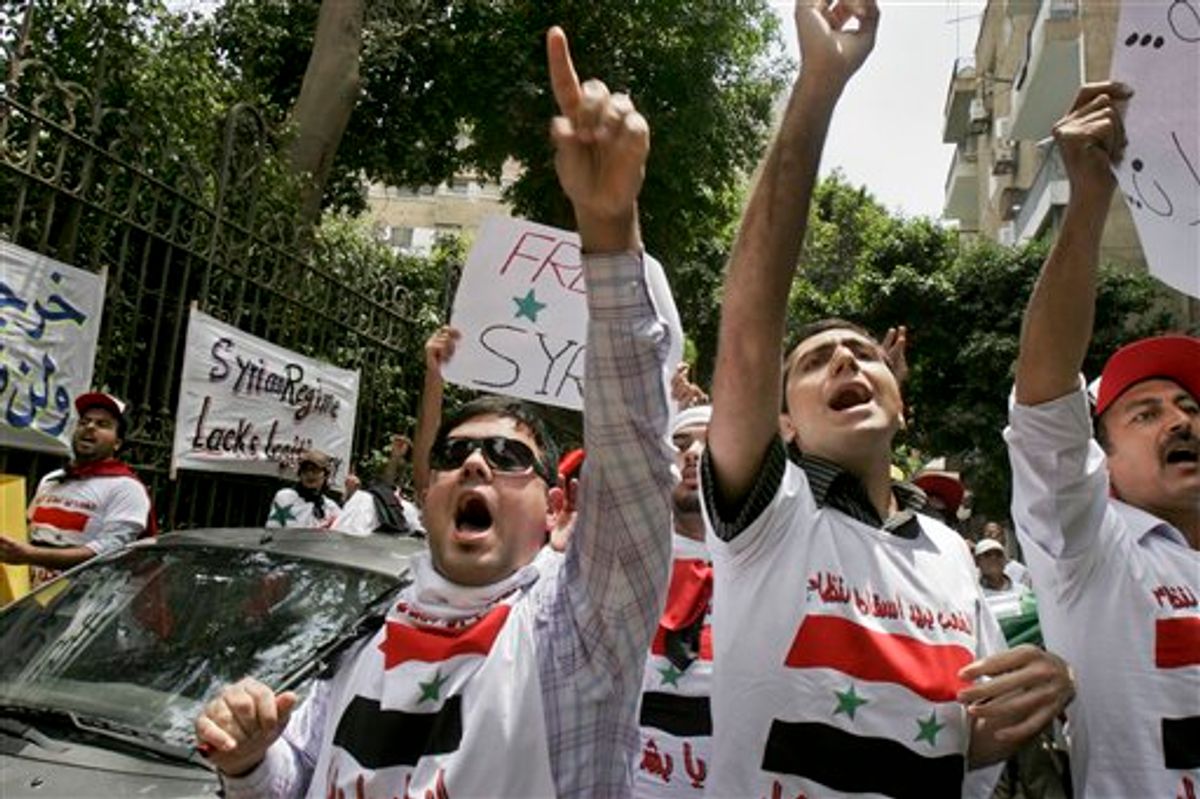 Demonstrators rally against the Syrian regime's crackdown on protesters, outside the Syrian embassy in Cairo, Egypt Tuesday, May 10, 2011. Syrian troops backed by tanks entered several southern villages near the flashpoint city of Daraa on Tuesday, according to an activist, as the Syrian government pressed its efforts to end a nationwide uprising. Writing in Arabic on t-shirts showing the Syrian flag reads "The people want to topple the regime". (AP Photo/Mohammed Abu Zaid) (AP)
--

The Syrian army shelled residential areas in central Syria on Wednesday, a sharp escalation in the government's attempts to crush a popular revolt against President Bashar Assad's rule, according to activists and witnesses.

Heavy gunfire was heard as at least three residential neighborhoods were hit by tank fire in the besieged city of Homs, which has experienced some of the largest anti-government demonstrations in recent weeks.

"There were loud explosions and gunfire from automatic rifles throughout the night and until this morning," a frightened resident told The Associated Press by telephone. "The area is totally besieged. We are being shelled."

Activists in Damascus who were in touch with residents also reported shelling in Homs, Syria's third-largest city and home to one of its two oil refineries.

The witnesses and activists, who spoke on condition of anonymity because they feared reprisals, said the shelling was targeting the Bab Sbaa, Bab Amr and Jouret el Aris neighborhoods.

The eyewitness said several people who fled Bab Sbaa through fields told him the area was badly damaged and that the shelling seemed indiscriminate.

Syrian authorities are determined to crush the uprising, which began in the southern city of Daraa in mid-March and quickly spread nationwide. Assad has dispatched army troops backed by tanks to Homs and other communities across the country, and his security troops have carried out sweeping arrests in an attempt to intimidate would-be protesters and quell dissent.

He also has announced a series of reforms, widely viewed as symbolic overtures to appease protesters.

On Wednesday, he was quoted by Syria's private Al-Watan newspaper urging Syrians to cooperate with the government so that the reform process may continue. He also pledged a swift solution to the issue of detainees who were jailed during the unrest.

The newspaper said Assad's remarks were made during a three-hour meeting with a delegation from the suburbs of Damascus including Maadamiyeh, which has been sealed off for days by the army as it pursued what it said were "armed groups."

Despite the security measures, small demonstrations were reported in several areas in the past few days.

Activists said three protesters were killed late Tuesday when government forces fired on demonstrations in Jassem, one of a cluster of villages near the besieged city of Daraa.

The government's heavy-handed response has triggered new international sanctions. The European Union has decided to impose sanctions on 13 Syrian officials, prohibiting them from traveling anywhere in the 27-nation bloc. U.S. sanctions target the assets of two Assad relatives and another top Syrian official. But neither EU nor U.S. sanctions target Assad himself, who succeeded his father as Syria's ruler 11 years ago..

U.N. chief Ban Ki-moon urged Syria Wednesday to allow an international aid assessment team to enter Daraa. He told reporters in Geneva he is disappointed the assessment team "has not yet been given the access it needs."

Ban added he had been assured by Assad that the team would be allowed into the city.