GOP candidates and the (delayed, for now) Uganda anti-gay bill

The evangelicals who trained African religious leaders to fight homosexuality, and the Republicans who need them 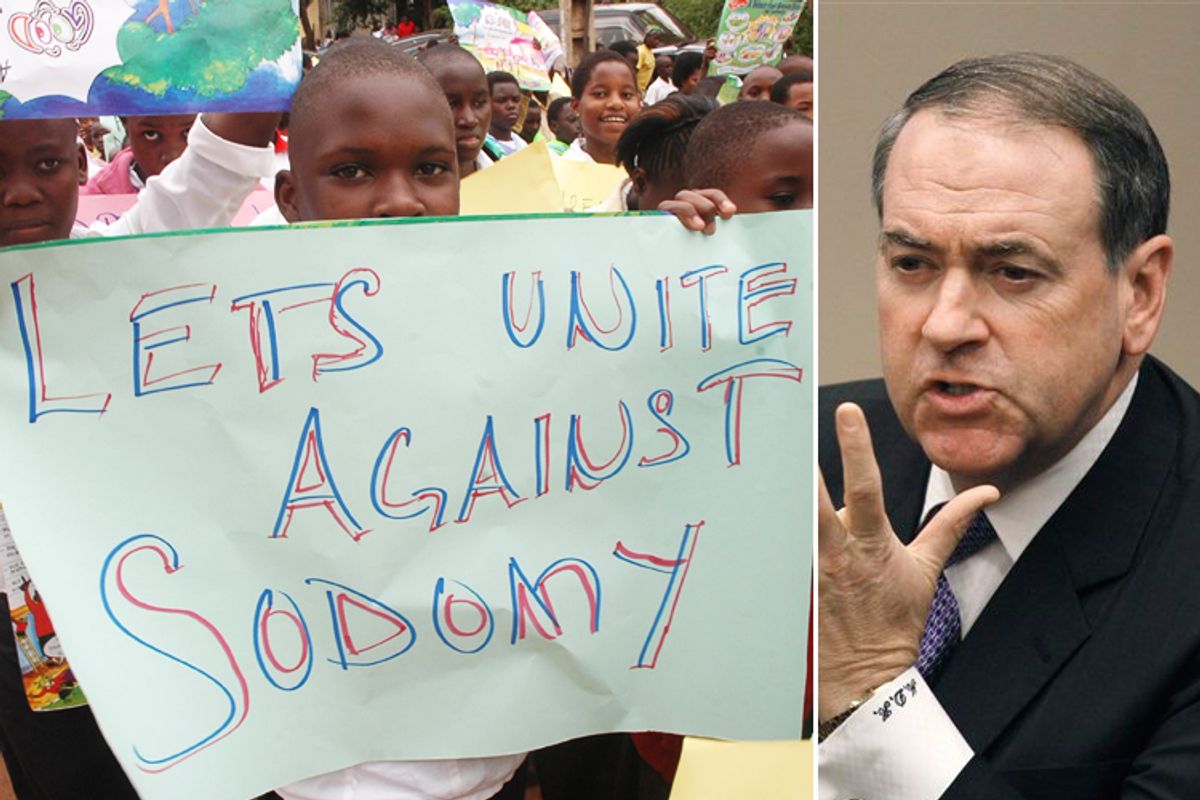 It was reported earlier today that Uganda's infamous anti-gay legislation had stalled in the parliament, ending, for now, its chance at becoming law. The Associated Press now says that the bill will be taken up again on Friday. The bill, according to its author, no longer specifies a punishment of execution for engaging in homosexual acts. But no one knows what it does say, anymore.

The role of American evangelical Christians in popularizing anti-LGBT sentiment in Uganda and working directly with the religious leaders responsible for this bill has been explored at length since the bill was introduced in 2009. Many American religious right groups have belatedly distanced themselves from their former allies, but it seems like the damage has already been done.

Two of the American figures bearing the most responsible are Rick Warren, the megachurch pastor who is hugely influential in spreading American-style evangelical Christianity throughout Africa, and Reverend Lou Engle, leader of "The Call," former roommate for Sam Brownback, and friend to Mike Huckabee, seen here telling people to attend one of Engle's "Call" rallies:

Engle's mass rallies in Uganda have, predictably, included calls for the assembled crowds to save their nation from witchcraft and homosexuality. I'm sure he's shocked that Ugandans took him so seriously, and proposed locking up gay people for life.

Rick Warren has repeatedly affirmed that he doesn't support the bill, but he also has a history of telling Ugandans that homosexuality is not a human right, and that it's comparable to pedophilia. Pastor Warren may sincerely be horrified by the thought of the government rounding up and executing homosexuals, but he's the one whose organization and African mission were and are deeply involved in training the anti-gay religious leaders leading the charge for this bill. It's his allies in Africa who are directly responsible for this.

While it can be very fun to get all self-righteous about the ignorance and hatred that leads to other countries passing such horrible laws, remember that "homosexual conduct" bans remain on the books in Kansas, Montana, Oklahoma, and Texas, years after the Supreme Court struck down anti-sodomy laws nationwide.

Remember, too, that whoever wins the Republican party's nomination for president will have to first kowtow to people so extreme in their anti-gay bigotry that they'd probably support an American Uganda-style law. Candidates campaigning in Iowa made appearances at a forum sponsored by a group that compares homosexuality to carcinogenic secondhand cigarette smoke. Labeling gayness a public health risk is providing an excuse to criminalize it, which, again, is what this horrible Uganda bill does. Asked if he agreed with their position, Tim Pawlenty said he was unsure. (Michele Bachmann just dodged the question.)

So American Christian conservatives seem to draw the line at killing gays and lesbians, but remain open to other methods of punishment.