Why the right hates Common 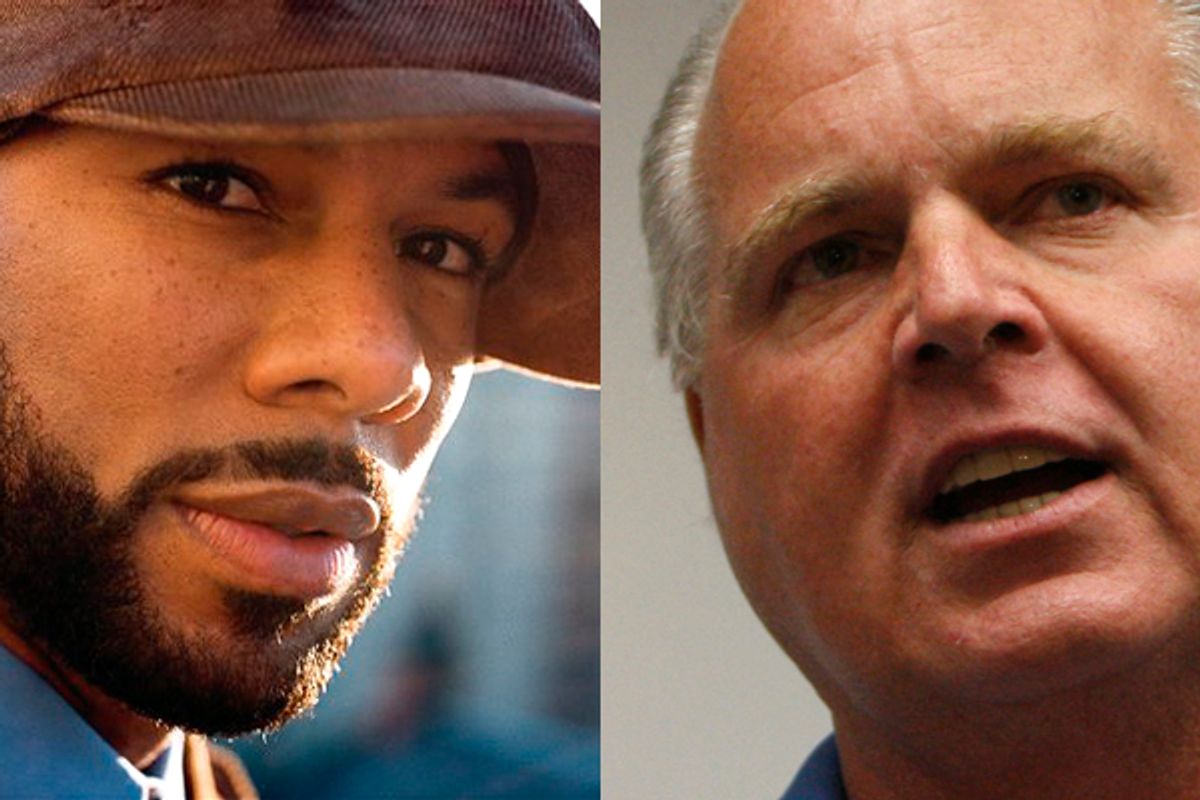 This undated handout publicity photo provided by Geffen Records, shows rapper Common. Michelle Obama's "evening of poetry" at the White House set off Republican critics before the artists had uttered a word. But it was the inclusion of Common that set off Republicans. Common, who is considered fairly tame as rappers go, is known for rhymes that tend to be socially and politically conscious. (AP Photo/Cass Bird) (Cass Bird)
--

On Wednesday, the White House honored arts education with a Celebration of American Poetry. There was a poetry workshop for children during the day, and in the evening, performances by the likes of Elizabeth Alexander, Rita Dove, Kenneth Goldsmith. This being the administration that can turn Jay-Z references into campaign rallying cries -- and campaign rallying cries into hit videos -- there were also musical artists on the bill, including Aimee Mann and Jill Scott. And, this being the administration that never fails to provoke the outrage of that holy trinity of right-wing attention gluttons -- Rush Limbaugh, Sean Hannity and Sarah Palin – there was controversy.

The man at the center of all those middle-aged white people's anger this week was Chicago's own Lonnie Rashid Lynn Jr., aka the Grammy award-winning rapper Common. The Daily Caller was quick to register its fury at Common's presence on the bill, with writer Neil Munro singling out "Letter to the Law," which dares to include lines like "Tell the law, my Uzi weighs a ton" and "Burn a Bush cos' for peace he no push no button/Killing over oil and grease/no weapons of destruction." This, according to the Caller, is tantamount to "threats to shoot police and ... calling for the "burn[ing]" of George W. Bush." Yes, and when William Blake wrote, "I am black," he literally meant he was black. And when Sylvia Plath wrote, "Daddy, I have had to kill you," she really killed her father. And when T.S. Eliot wrote, "We are the hollow men," he was in fact a chocolate Easter bunny. Because there's no room for metaphor or imagery or drama in poetry.

But who could expect any acquiescence to Lit 101 from a team whose favorite medium isn't verse but sarcasm? On Tuesday, Palin tweeted a link to the Caller story with a snide, "Oh lovely, White House ..."  And Rush Limbaugh sneered on his show that "Now, Common is an artiste. That's what you must know, he's an artist ... in addition to being an artiste ... he's also a rapper and he has written poems and songs in support of cop killers." And Sean Hannity asked flat out on his show, "Is this the guy we should be inviting to the White House, the people's house?"

Common has, it's true, a lengthy history of controversial stances. He's been public in his support of activist and fugitive Assata Shakur, who was convicted for her role in a 1973 shootout that left New Jersey State Trooper Werner Foerster dead, and is a member of Rev. Jeremiah Wright's controversial congregation.

Does that automatically mean that his presence on the poetry bill was, in the words of Palin on Fox Wednesday, "so lacking of class and decency and all that's good about America?" Well, Palin, maybe Young MC had other plans for Wednesday. And confusing though this forever remains to those with no poetry in their own souls, art is supposed to make you feel something. It's supposed to make you think and get you scared sometimes. That means it's doing its job. It's not all, "I saw a flower and it was pretty." Safe, crowd-pleasing fare is for "Idol," not art.

As White House Press Secretary Jay Carney pointed out this week, the president "opposes" Common's more incendiary words, "but he does not think that is the sum total of this particular artist's work … He's known as a socially conscious hip-hop artist or rapper who has done a lot of good things." Plus, as Jon Stewart pointed out on "The Daily Show" -- he's not too dangerous to be in a Gap ad, America!

Common has, in fact, spent his career speaking out on issues like animal rights and violence and misogyny in hip-hop. He's a man who's written, "I believe in heaven more than hell/Blessings more than jail/In the ghetto, let love prevail." Common posted on Facebook Wednesday his own response to the dust-up, saying that "Politics is politics and everyone is entitled to their own opinion, I respect that. The one thing that shouldn't be questioned is my support for the police officers and troops that protect us every day. Peace yall!"

The president said Wednesday night, "A great poem is one that resonates with us, that challenges us, and that teaches us something about ourselves and the world that we live in." And maybe an African-American male from the South Side of Chicago has his own perspective on the world we live in, one that merits consideration even if it makes Sarah Palin uncomfortable. Common may or may not be a great poet. But he sure knows how to be challenging. And simply by his presence Wednesday night -- and the ire he provoked -- he proved the power of words before he even opened his mouth.