GOP chokes on own Medicare Kool-Aid 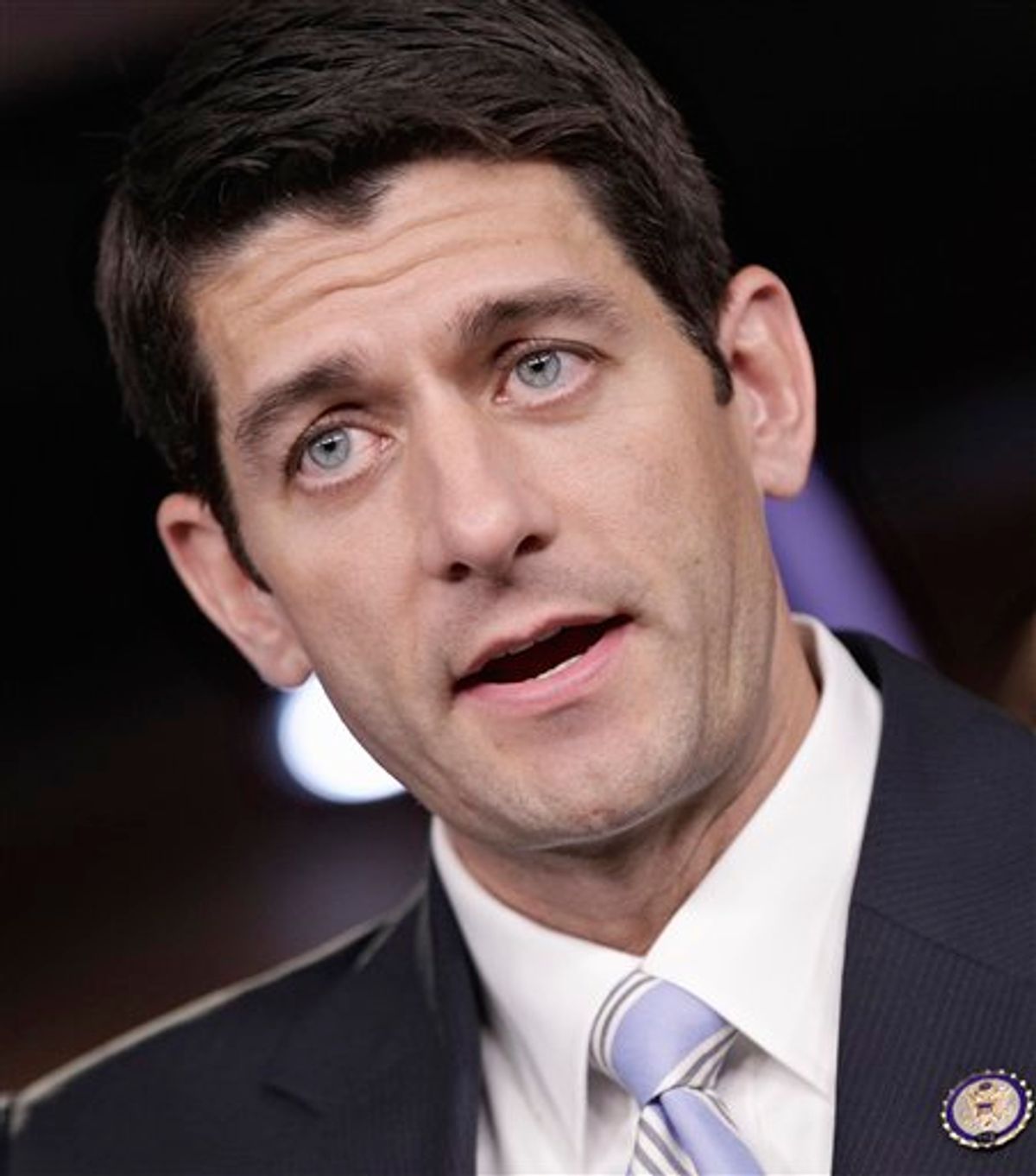 A funny thing happened along the Roadmap for America's Future. Ordinary citizens smoked out its actual impact on their lives while much of the Washington celebrity pundit class were still uttering hosannas to Rep. Paul Ryan's, R-Wis., alleged intellectual honesty and courage.

As a result, congressional Republicans unceremoniously abandoned their crackpot scheme to privatize Medicare within three weeks of voting almost unanimously to endorse it. House Ways and Means Committee Chairman Dave Camp, R-Mich., explained that there was no point wasting time on a plan that had zero chance of passing in the Senate, and was certain to be vetoed by President Obama if it did.

Camp also acknowledged that as the same logic applies to the GOP's attempts to repeal the 2009 Affordable Care Act, aka "ObamaCare," his committee wasn't going to fool with that either.

Poor babies. Here they've been so generous and cooperative, and Obama trashes them.

Actually, the president's exact words are worth repeating. The GOP roadmap, he said, asks Americans to accept that "even though we can't afford to care for seniors and poor children, we can somehow afford more than $1 trillion in new tax breaks for the wealthy. Think about it ... They want to give people like me a $200,000 tax cut that's paid for by asking 33 seniors to each pay $6,000 more in health costs? That's not right, and it's not going to happen as long as I'm president."

No it's not, and it never was. The mystery is why congressional Republicans chose to cast a purely symbolic vote in favor of such a deeply unpopular idea. Every available poll shows that strong majorities oppose sharp Medicare cuts, let alone the GOP plan to ditch guaranteed health insurance for citizens over 65.

Yet House Republicans, who came to power in 2010 partly by accusing the Obama administration of trifling with Medicare, committed themselves to a deeply ideological revision of America's social contract, reducing the top marginal tax rate on multimillionaires from 35 to 25 percent and paying for it by converting seniors' medical insurance to a mandated voucher system.

And, yeah, you read that right. If enacted, Rep. Ryan's excellent plan would have required seniors either to buy private health insurance or pay a hefty tax penalty as well as forfeiting a lifetime's Medicare tax payments.

If you're thinking that mandates are precisely what GOP savants say makes "Obamacare" an unconstitutional threat to liberty, you're right.

The trick is to call it something else, in this case a "refundable tax credit" -- a distinction without a difference. You buy the private insurance or pay an extra $2,500. Exactly like Obamacare, except the penalty's much stiffer.

Have I mentioned that House Republicans supported Ryan's plan 235-4? (Democrats opposed it unanimously.) Then they went home for some very lively town hall meetings before returning to Washington with their tails tucked firmly between their legs. Several GOP congressmen virtually got driven from the room by irate constituents.

(My own GOP Rep. Tim Griffin bravely opted for the TV town hall route, taking pre-screened questions from invited callers. Even so, he reportedly assured one woman that Ryan's scheme would raise taxes on wealthy corporations and individuals, which happens to be untrue. If it did, Griffin wouldn't support it.)

Roadmap to Big Rock Candy Mountain is more like it. Ryan's scheme relies upon magic asterisks, insupportable economic projections and Orwellian euphemisms from beginning to end. When is a voucher not a voucher? When you call it "premium support," his supporters insist.

To make the numbers work, Ryan's plan relies upon the proverbial "player to be named later" -- cutting tax rates while promising to eliminate "loopholes" it fails to specify. Bruce Bartlett, the one-time GOP budget expert who clings to an unfashionable belief in arithmetic, puts it succinctly: "I learned long ago that when someone says everything is on the table that really means nothing is on the table."

Absent Medicare privatization, however, the savings from Ryan's plan add up to a big fat zero, which constitutes progress when you come to think of it. Most GOP miracle cures take years to unravel.

So why did Republicans buy into it? Some may have mistakenly believed their own propaganda about President Obama's weakness. Some in safe GOP districts may fear Tea Party primaries more than Democratic opponents. Writing in the New Republic, Jon Chait suggests that many Republicans "just got caught drinking their own Kool-Aid about how the public agrees with their vision."

To summarize, yet another Washington psuedo-event; and an episode Democrats must never let voters forget.