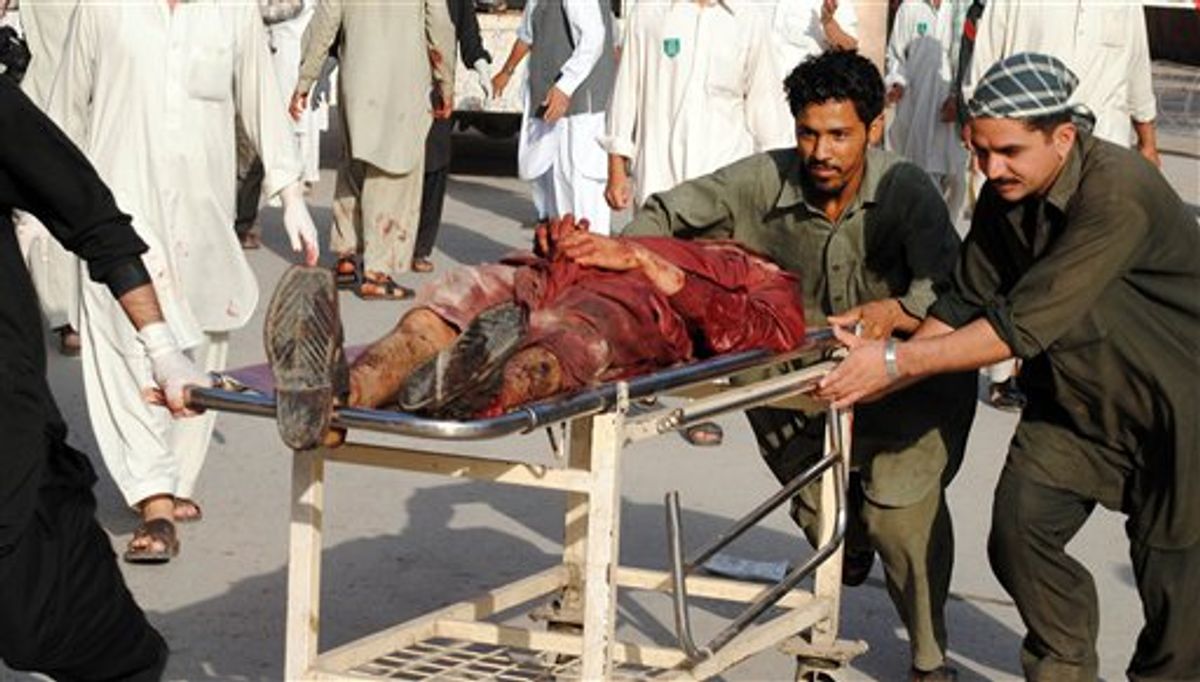 People rush a man injured in a suicide bomb attack to a local hospital in Peshawar, Pakistan Friday, May 13, 2011. Twin explosions struck a paramilitary training center in northwestern Pakistan on Friday, in the bloodiest attack in the country since a U.S. raid killed al-Qaida chief Osama bin Laden. (AP Photo/Mohammad Zubair) (AP)
--

A pair of suicide bombers attacked recruits leaving a paramilitary training center in Pakistan on Friday, killing 80 people in the first retaliation for the killing of Osama bin Laden by American commandos last week.

The blasts in the northwest were a reminder of the savagery of al-Qaida-linked militants in Pakistan. They occurred even as the country faces international suspicion that elements within its security forces may have been harboring bin Laden, who was killed in a raid in Abbottabad, about a three hours' drive from the scene of the bombing.

"We have done this to avenge the Abbottabad incident," Ahsanullah Ahsan, a spokesman for the Pakistani Taliban, told The Associated Press in a phone call. He warned that the group was also planning attacks on Americans living inside Pakistan.

The bombers blew themselves up in Shabqadar at the main gate of the facility for the Frontier Constabulary, a poorly equipped but front-line force in the battle against al-Qaida and allied Islamist groups like the Pakistani Taliban close to the Afghan border. Like other branches of Pakistan's security forces, it has received U.S. funding to try to sharpen its skills.

At least 80 people were killed, including 66 recruits, and around 120 people were wounded, said police officer Liaqat Ali Khan.

Around 900 young men were leaving the center after spending six months of training there. They were in high spirits and looking forward to seeing their families, for which some had brought gifts, a survivor said.

Some people were sitting inside public minivans and others were loading luggage atop the vehicles when the bombers struck, witnesses said.

"We were heading toward a van when the first blast took place and we fell on the ground and then there was another blast," said 21-year-old Rehmanullah Khan. "We enjoyed our time together, all the good and bad weather and I cannot forget the cries of my friends before they died."

The scene was littered with shards of glass mixed with blood and flesh. The explosions destroyed at least 10 vans.

It was the first major militant attack in Pakistan since bin Laden's death on May 2, and the deadliest this year.

Militants had pledged to avenge the killing and launch reprisal strikes in Pakistan.

The Taliban spokesman also suggested the attack was aimed as punishment against Pakistani authorities for failing to stop the unilateral U.S. raid that killed bin Laden, something that has sparked popular nationalist and Islamist anger.

"The Pakistani army has failed to protect its land," Ahsan said.

In its communications, the Taliban often tries to tap into popular sentiments in the country, where anti-Americanism is often stronger than feelings against Islamist militants. This is despite militant attacks over the last four years claiming the lives of many hundreds, if not thousands, of civilians.

Some 350 lawyers sympathetic with Islamists attended special prayers for bin Laden on the premises of the provincial high court in the eastern city of Lahore on Friday. The lawyers cursed the May 2 raid, chanting "Down with America."

The explosive vests used in Friday's attacks were packed with ball bearings and nails, police said.

Police official Nisar Khan said a suicide bomber in his late teens or early 20s set off one of the blasts.

"The first blast occurred in the middle of the road, and after that there was a huge blast that was more powerful than the first," said Abdul Wahid, a 25-year-old recruit whose legs were wounded in the blasts.

He said he was knocked to the ground by the force of the explosions.

"After falling, I just started crawling and dragging myself to a safer place ... along the wall of a roadside shop," he said.

The Sept. 11 mastermind and at least four others were killed by U.S. Navy SEALs who raided bin Laden's compound in Abbottabad, a garrison city not far from the capital. Bin Laden is believed to have lived in the large house for up to six years.

Pakistani officials have denied knowing he was there but have criticized the American raid ordered by President Barack Obama as a violation of their country's sovereignty. To counter allegations that Pakistan had harbored bin Laden, the officials have pointed out that many thousands of Pakistani citizens, and up to 3,000 of its security forces, have died in suicide bombings and other attacks since Sept. 11, 2001, when Islamabad became an ally of the U.S. in taking on Islamist extremists.

Many of the attacks in Pakistan have targeted security forces, but government buildings, religious minorities, public places and Western targets have also been hit.