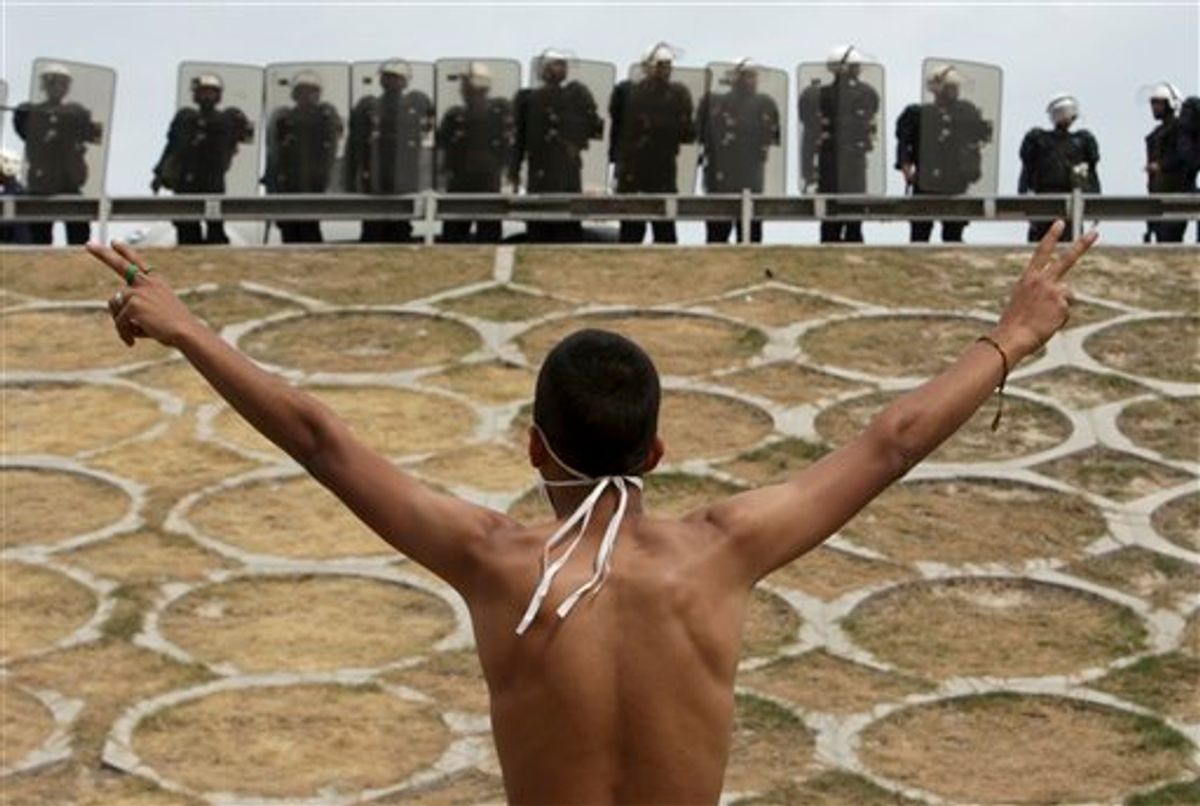 FILE - In this March 13, 2011, file photo, a Bahraini anti-government protester gestures in front of riot police on an overpass near Pearl roundabout in Manama, Bahrain. Bahrain's state media says a military court in the Gulf kingdom has convicted four Shiite protesters and sentenced them to death, Thursday, April 28, 2011, for the killing two policemen during anti-government demonstrations last month. (AP Photo/Hasan Jamali, File) (AP)
--

The State Department today declined to even send a representative to a congressional commission's hearing on human rights in Bahrain, underscoring how the U.S. continues to give the Gulf kingdom a pass on human rights abuses.

"We invited Undersecretary [William] Burns and Assistant Secretary [Jeffrey] Feltman and they weren't able to attend," Ari Levin, a fellow at the Tom Lantos Human Rights Commission, tells me. "We reached out through the congressional liaison to come up with an alternate, and State said due to scheduling conflicts, no one could attend."

So the United States State Department couldn't find a single person free on a Friday morning to talk about the dire situation in Bahrain. From the human rights commission's website:

As has been widely noted, the U.S. has two big reasons for ignoring what's going on in Bahrain: first, the kingdom hosts the U.S. Navy's Fifth Fleet; and second, the U.S. and its ally Saudi Arabia are worried about growing Iranian -- and Shiite -- influence in the region. The Bahraini protesters are Shiites and the ruling monarchy is Sunni.

Tens of protesters in Bahrain have been killed since February, and hundreds more injured and detained. Lately, we've seen Bahrain bulldoze Shiite mosques and prosecute medics for having treated protesters.

Ironically, the deep American ties to Bahrain mean that the administration has some real leverage here -- in contrast to, say, the situation in Syria. But there's no sign the leverage is being used.

The State Department has not responded to requests for comment.

Marian Wang at ProPublica has more on the administration's tepid stance toward any discussion of human rights in Bahrain.