When I got too close to the Jersey mob

We worked with some shady characters at the printing press. One of them took me on a car ride I'll never forget 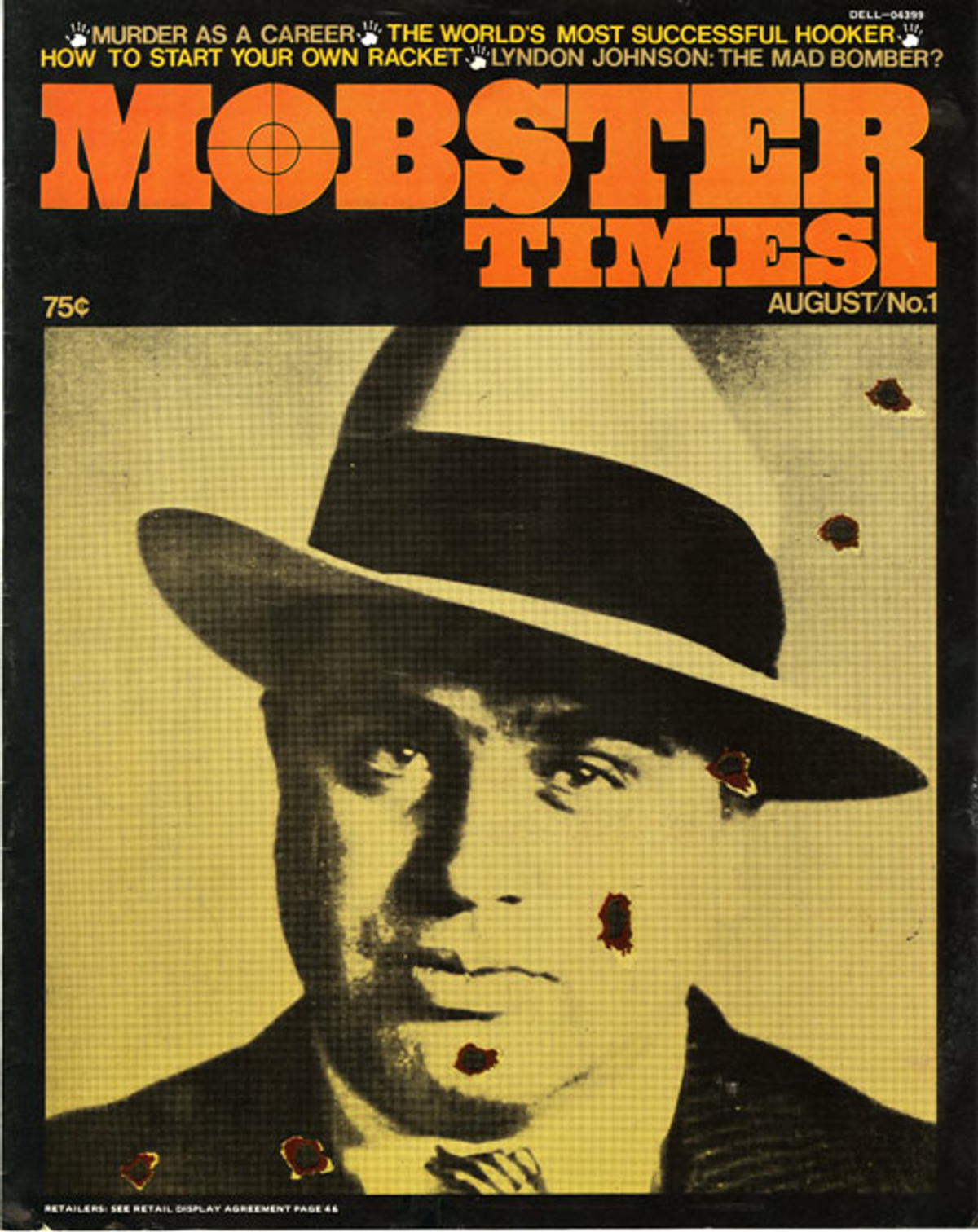 A drive through the New Jersey wetlands can be quite enjoyable, but not when the invitation comes as a threat from Sal, a hulk of a guy with reputed ties to the underworld, who ran a printing firm I worked with many years ago, and who was upset because I hired some guys to go to a bindery in Jersey and tear up 10,000 magazine covers he had badly printed. "Stevie, Stevie," he said over the phone, "you can't do this, babe. You're costing me money." " I'm sorry, Sal," I said with a quiver, but firmly holding my position. "The job stinks, and I just can't let it go through." After a brief silence he said, "OK, let's take a ride to the bindery, I'll pick you up." Fifteen minutes later he pulled in front of my office in his sparkling white Caddy. I got in. He looked over and sneered. "What was I doing here alone with Sal going to Jersey?" I asked myself. "Don't worry, Stevie," he replied as if reading my mind. "We'll settle this shit once and for all." And so began what I thought was the last car ride of my life.

You see, it was 1972 and I was the art director of Mobster Times, a magazine started by the publishers of Screw, for whom I was also art director, as a journal of satire (à la the National Lampoon) focusing somewhat on the political scandals that were beginning to brew during the Nixon administration in the early 1970s (and also as a curiously vindictive response to Screw's former art directors who had fallen into disfavor when they left the Screw family and started a magazine called Monster Times). Nevertheless, it was a serious effort to make a topical humor magazine that focused on new trends in white-collar crimes, while appealing to an audience who savored true crime stories. It was also Screw's first foray into non-sex publishing.

In fact, the first issue, which had the subtitle "Crime Does Pay," and showed photographs on the editorial page of Screw's publishers and myself in Al Capone hats mockingly pointing guns at the reader, was edited by a respected author of crime books. The issue included an interview with Gay Talese, who had just finished researching the life of Mafia kingpin Joe Bonano (and was about to write a book about the sex trade in New York), a story by Noel Hynd, who currently writes bestselling crime novels, an exposé of fake nuns who beg for money in the New York subways, a feature on Richard Nixon's brother's shady dealings with Howard Hughes, and a quiz to determine the world's greatest mobster: J.Edgar Hoover. But the tour de force was a movie review of "The Godfather," which had just been released, purportedly by soon-to-be-slain mobster Joey Gallo, as told to our publisher, Al Goldstein. Our first cover was a sepia photograph of Al Capone (our mascot) shot with bullet holes (which I made myself).

Since Screw's publishers believed that Mobster Times was as viable as the National Lampoon (which in 1973 was in its heyday) they wanted to avoid the Screw distribution setup and find a national distributor. A few were approached but only Curtis, the venerable publisher of the Saturday Evening Post, Holiday and scores of other household magazines, was interested. Actually, Curtis had over-diversified and fallen on hard times, so was looking for an easy income vehicle. Since we were producing the magazine entirely, Curtis had to put up very little money and agreed to take us on. But even with the promise of national distribution we could not afford full-color printing or slick paper, so Mobster Times' guts was printed on newsprint by Screw's cheapo web press printer. We wanted the covers to be printed on glossy stock at Sal's shop. Herein the trouble begins.

Sal basically printed sexually sensitive material for which quality control was not a major issue. He didn't always print this kind of stuff, nor was he always wealthy. In fact, he used to do small run-of-the-mill jobs and was on his way to debtor's prison when purportedly his business was "acquired" by ... well, you get the picture ... who proceeded to keep the half-dozen multiliths working through the night and on weekends printing a genre of printed matter known as T&A books (tits and ass). While I have no idea how it all worked, I assume the T&A was distributed by the new owners, who distributed other items as well. All I do recall is that whenever a grand jury was called to investigate strong-arm tactics  and takeovers in the publishing and printing business, Sal would turn on his answering machine and take an extended vacation.

When Sal's business associate, whom we shall call Sir, learned that Screw was publishing another magazine that was going to be distributed by someone else he called a lunch meeting at Umbertos Clam House, the very same restaurant where a few weeks later Mr. Gallo, who was somehow related to Sir, would be gunned down, initiating a yearlong gangland conflict. The conversation was as heavy as the food and began with, "So, what's this new venture you got?" asked Sir menacingly. Actually, before lunch we were worried that Sir would be more disturbed by the content of Mobster Times -- with emphasis on the word "mobster" -- than the fact that he wasn't going to distribute it. "It's a magazine about Nixon and hypocrisy," someone on our side offered. "We didn't think you'd be interested in it," said one of Screw's publishers. "I'm interested in everything that's on the newsstand," said Sir, "especially when it's produced by someone with whom I have a relationship. You sure this isn't another sex paper?" We all shook our heads nervously. "Definitely not," I said impetuously. After all, I was only 22 years old and since I did not have the good sense to get a respectable job, here I was at lunch with Sir just a heartbeat away from making a jerk of myself. "This is about crime in high places," I continued, "like that J.Edgar Hoover guy, who has abused his power for decades, and Nixon who's doing God knows what to make a mockery of our system, or ..." "OK, I get the picture," said Sir impatiently, "this is another one of those crackpot, commie underground papers, right? That's what it sounds like. And you're right, I don't want anything to do with it." "Unless it turns a profit?!" quipped Sal. "Yeah, right," replied Sir, who it turns out voted for Nixon. "But what about the printing," asked one of the publishers, "can we print with you?" To which Sir responded in an annoyed tone, "Only as a favor, and only at night. I don't even want to see that commie stuff in my shop." I wonder if Mobster Times had been devoted to the heroes of the underworld would Sir have been more enthusiastic? Regardless, he did allow that we could print at his shop, which saved us a bundle of money. Still, we weren't out of the woods.

After putting the content and design together, we decided to take out ads in the New York Times, Daily News and Village Voice. We printed posters and stickers using our mascot photo of Capone with the headline, "Now There's a Magazine for Him, Mobster Times" (my idea), and I did a typographically elegant display ad that explained what we hoped to accomplish. At the end of the copy (and as an end mark for all our stories) I printed a black hand -- cute, eh? The newspaper ads were costly -- in fact, we'd only break even if we sold over 1,000 subscriptions -- and Curtis didn't spare a penny to help. The ads were timed to coincide with a massive (for us) publicity campaign that included a press conference, press release and press package that would include promo copies of the magazine. Everyone was poised. I went to the printer to check the guts.

After a few hours of printing, I noticed a flat full of our covers. Sir was not kidding; they were printed late at night, and they didn't even tell me so I could watch the run. I cut the plastic ties and looked at the covers. Ugh! Not only were they printed late at night, but it looked as if they were done in total darkness. Every other cover was washed out, the black border surrounding the photograph was gray, the sepia was dull red. I was furious! In a fit of pique I called Sal: He was out. I called my publisher: He told me to destroy them. "How?" I asked. "Hire some guys," he said. I did. And so two days later, the floor of the Jersey bindery was littered with thousands of torn Mobster Times covers. And I was sitting on white leather seats, listening to a Sinatra eight-track tape, on my way through the Jersey wetlands possibly to a watery grave. For all I know Sal may have driven other smartass art directors to the same place.

Instead we arrived at the bindery, Sal looked at the mess and said, "Stevie, you're right, babe. It's my fault. I had a moron working that shift. I'm sorry, we'll reprint, and I'll eat it. But remember what I'm doin' here." Of course, I thanked him profusely. We drove back, and this time I was able to enjoy the natural wonders of Jersey's threatened swamps. But our troubles were still not over.

The Daily News and Voice ads ran two weeks early, doing us no good at all. The Times ad ran on time, but the day the issue was released by Curtis, J. Edgar Hoover died. What timing! First Joey Gallo was killed right after we printed the guts and then J.Edgar on the day we premiere with an insulting feature about the FBI's dearly departed leader. Needless to say, no one came to our press conference; and worse, the ostensibly conservative Curtis stopped distributing the issue citing it would be in bad taste to premiere it at this time. We heard from Sal that Sir was not too happy with the issue either, but for other reasons, and looked forward to seeing it die.

We published two subsequent issues. The second cover showed Brad Holland's parody of Rembrandt's "Drapiers of the Syndics" (aka "The Dutch Masters") featuring J. Edgar, Nixon, Hitler and other of the world's most reprehensible criminals. Inside we ran a terrific piece called "The Misfortune Society Newsletter," exploring the horrible conditions within American prisons, an exposé on industrial espionage, and a calendar of great moments in crime. Curtis couldn't or wouldn't get us good display on newsstands and sales went nowhere. Moreover, despite our rather acute predictions of and smartass commentary on government wrongdoing, the last issue was published eight months before the Watergate hearings began and most people, like Sir, refused to believe and would not support a publication that alleged such things.

Mobster Times died as it lived without hardly anyone noticing. But I wouldn't have missed it for the world.

*All images credited to Steven Heller