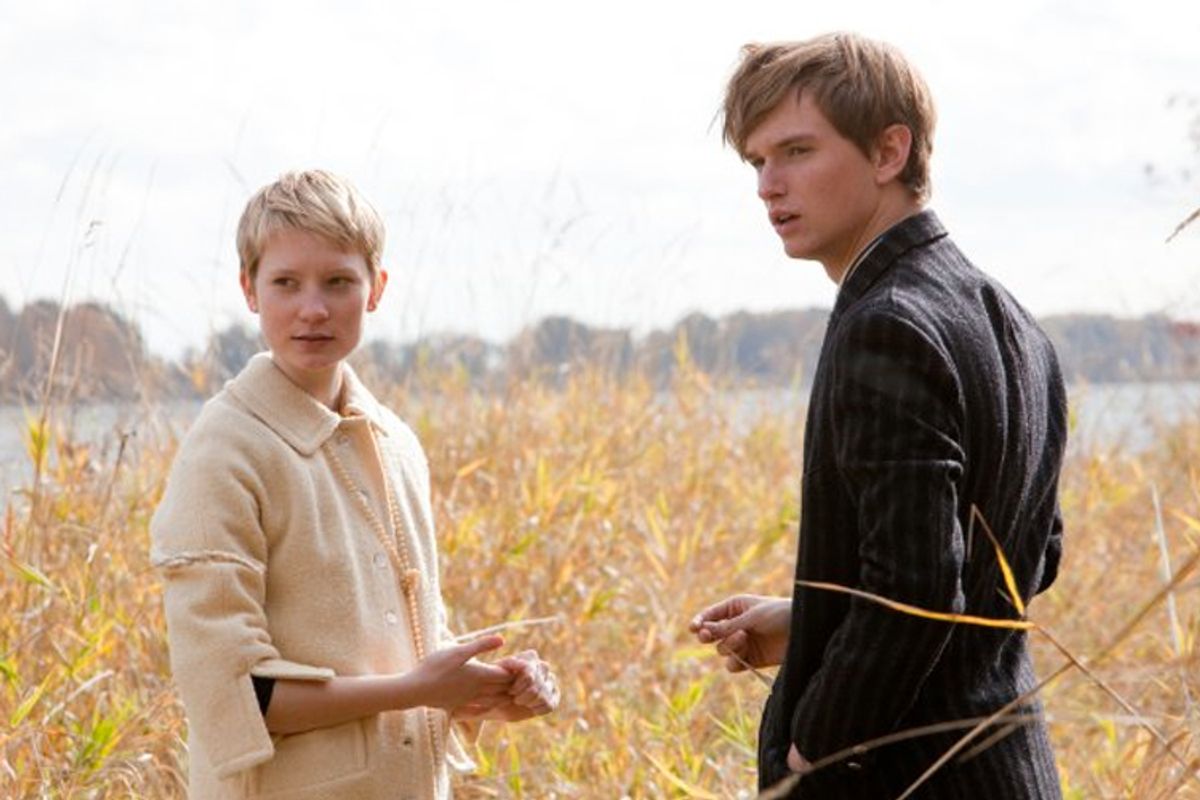 CANNES, France -- Gus Van Sant certainly seems like the logical choice to make a love story about two death-haunted young outsiders. Maybe too logical, because the emo-flavored "Restless," which opened the Certain Regard section of the Cannes Film Festival on Thursday, is so washed-out and wispy it seemed to dissipate promptly in the Mediterranean breeze. There are plenty of reasons to like this movie, from the casual, desaturated photography of Harris Savides -- as usual, Van Sant employs the watery light of Portland, Ore., his hometown -- to the effortless performance of rising star Mia Wasikowska as Annabel, a teenage girl dying of brain cancer. (I suppose that's an Edgar Allan Poe reference, of sorts.) But "Restless" just mopes along in its bittersweet, Goth-meets-Zen mode, emulating the drifty, affectless lives of its characters way too closely. For a movie about a brief, doomed love affair its emotional payoff is almost imperceptible.

Van Sant has long pursued a dual career as a Hollywood filmmaker (from "Good Will Hunting" to "Milk") and also as a director of youth-culture indies, beginning with seminal late-'80s/early-'90s films like "Drugstore Cowboy" and "My Own Private Idaho." He no longer has much of an American audience in the latter category; roughly since "Gerry" and "Elephant" (which won the Palme d'Or here in 2003) he's belonged to the Woody Allen-Jim Jarmusch club, as an auteur celebrated in Europe but ignored at home. "Restless" feels like an attempt to split the difference between the mass-market success of "Milk" and the near-total invisibility of, say, "Paranoid Park," Van Sant's moody 2007 exploration of Portland skater culture. That's not a terrible idea, and remaking "Love Story" for the "Twilight" generation probably isn't a bad idea either, but you never quite feel that this mild, eccentric sub-"Harold and Maude" vision of death engages Van Sant's full attention.

Looking strikingly like her namesake Mia Farrow, with close-cropped hair and a boyish wardrobe, Wasikowska finds a specific energy in Jason Lew's rather bland screenplay, making it clear that Annabel's relentlessly sunny demeanor is driven by a steely ferocity. She's going to die and she knows it, but she won't give in to the rhetoric of death, and insists on viewing it from a detached perspective. She's fascinated by Darwin and memorizes details about seabirds and insects, as if trying to put the impending end of her short life into a greater evolutionary perspective. As she tells her protective older sister Lizzie (Schuyler Fisk), viewed in geological terms dying in three months is no different from dying in three days or 30 years. When she spots Enoch (Henry Hopper) at a friend's funeral, she ID's him immediately as a chronic funeral-crasher -- he's dressed too formally, and his manner is too downcast. "No one wears black at these things anymore," she says. "It's a bummer."

Hopper looks at first glance -- and second, and third -- startlingly like a boyish, blond version of his late father, Dennis Hopper, and it's hard to say whether that helps or hurts the film. The younger Hopper doesn't have his dad's natural ferocity as an actor, but neither does anybody else. He isn't terrible by any means, but this is his first adult movie role (he's 20) and Enoch is a maddening character who reveals almost nothing about himself but is expected to carry much of the film's emotional weight at critical moments. At first he wants nothing to do with Annabel; it's almost like she's decided she wants a boyfriend for her last weeks of life, and even this deranged loser will do. His parents are dead; he goes to funerals but not to school; his best (and only) friend is the ghost of a World War II kamikaze pilot (Ryo Kase). When he's not at funerals, he sits in his room playing Battleship with his spectral Japanese pal, and losing.

There's no denying that these two look great together -- Hopper certainly has the bored, androgynous beauty Van Sant has always admired in his leading men -- and I'd say that the director and his stars come close to rescuing "Restless" from the pileup of whimsical details and the relentless jangling of the indie-pop soundtrack, which ruins almost every intimate moment. There's a misty, lovely Halloween interlude (the second such scene I've seen in two days -- has every director been studying the Blu-ray of "Meet Me in St. Louis"?) that finally brings this chaste duo together as lovers and reminds us that they're not much more than damaged children, trying to face a tragic twist of fate on their own terms. You can't come away totally hating "Restless," especially since Annabel and Enoch may well be right that life and death and love are transitory phenomena, not to be taken too seriously. But in that case movies don't matter either, and the chronically diffident Gus Van Sant is not the guy to argue otherwise.