Five signs your Republican governor wants to be president

Did he suddenly express doubts about evolution or develop an interest in bombing foreign countries? Watch out 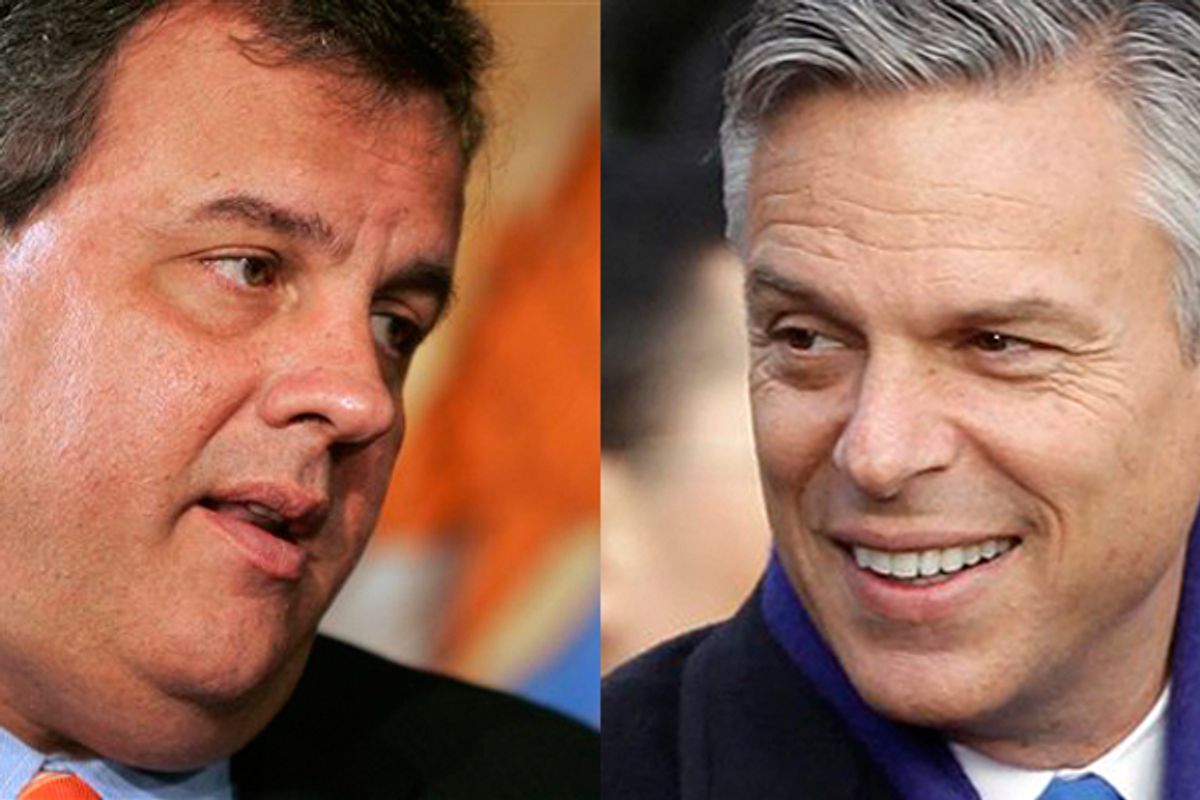 Chris Christie, a wealthy, well-educated lawyer from New Jersey, is suddenly not willing to say whether or not he believes in biological evolution. Christie went to a very good public high school and he's a mainstream American Catholic, not an evangelical Protestant, so I am going to guess that he does believe in evolution, if he ever even gives the idiotic question any thought. I'd also guess that believing in evolution is not particularly controversial among New Jersey Republicans, who are not exactly Kansas Republicans.

So why hedge? Well, someday -- maybe someday soon -- he may want the support of Kansas Republicans. And sometimes, successful Republican politicians begin debasing themselves to win the votes of far-right rubes well before they begin forming exploratory committees.

Here are some signs that your formerly rational Republican governor (or former governor, or mayor, or representative) might be planning a presidential run:

Evolution, a scientific fact, is not recognized by one of America's two major political parties, and a majority of Americans are either creationists or at least express "doubts" about evolution, so it just makes sense for people seeking the Republican nomination to align themselves with people who think the Earth is 10,000 years old.

But belief in evolution correlates to education level, and most of the elites in politics and media are well-educated, so you don't want to become a creationist -- then you will be mercilessly mocked -- you just need to signal your tacit support for creationism and promise to let it be taught in schools. Just like Chris Christie did!

Candidate suddenly agnostic on or openly hostile to climate science

Not that long ago, most Republicans agreed that climate change was real and something should be done about it. Nearly everyone currently running for the Republican nomination supported cap-and-trade, which was the moderate alternative to a proper carbon tax. Now, though, not so much!

Now, even those who still profess to believe in climate science think the government shouldn't do anything to stop it (the "reasonable" Jon Huntsman approach) and the rest of them no longer think climate change is happening, because Al Gore, who is fat, is also now divorced (the shameless Gingrich approach).

A governor does not really need to know what to do about Iran or North Korea, but if one suddenly starts telling everyone his or her ideas about what to do about Iran and North Korea, this governor is probably dreaming of the nation's highest office. (Or at least a Senate run.) If those ideas seem to just involve bombing everyone, everywhere, this guy's serious! (If the candidate becomes a paleocon isolationist instead, no one will allow them anywhere near the nomination.)

It's a red alert if your governor reveals these positions in a book of some kind.

Most governors and state legislators have to balance their state budgets, and to balance state budgets during horrible times like these, lots of taxes (often renamed, as in Tim Pawlenty's Minnesota, "fees") are necessary. But current Republican orthodoxy has it that any taxation, at all, on anyone, is a tyrannical attack on LIBERTY itself.

So they will defend their "fee"-raising as not taxation while demanding that the national deficit be taken care of within three years without a single tax increase on any American. That is leadership. (Plus, you want Grover Norquist on your side.)

Sure, free federal cash for a major infrastructure project sounds great on paper, and also in reality, but Republicans hate trains now, so you better turn that money down, even if you formerly campaigned for it. Trains are for Europe!

If your governor checks off two of these, get worried. If he or she hits three, get ready for the major Politico story on the Republicans Secret Weapon (or Reluctant Best Shot).