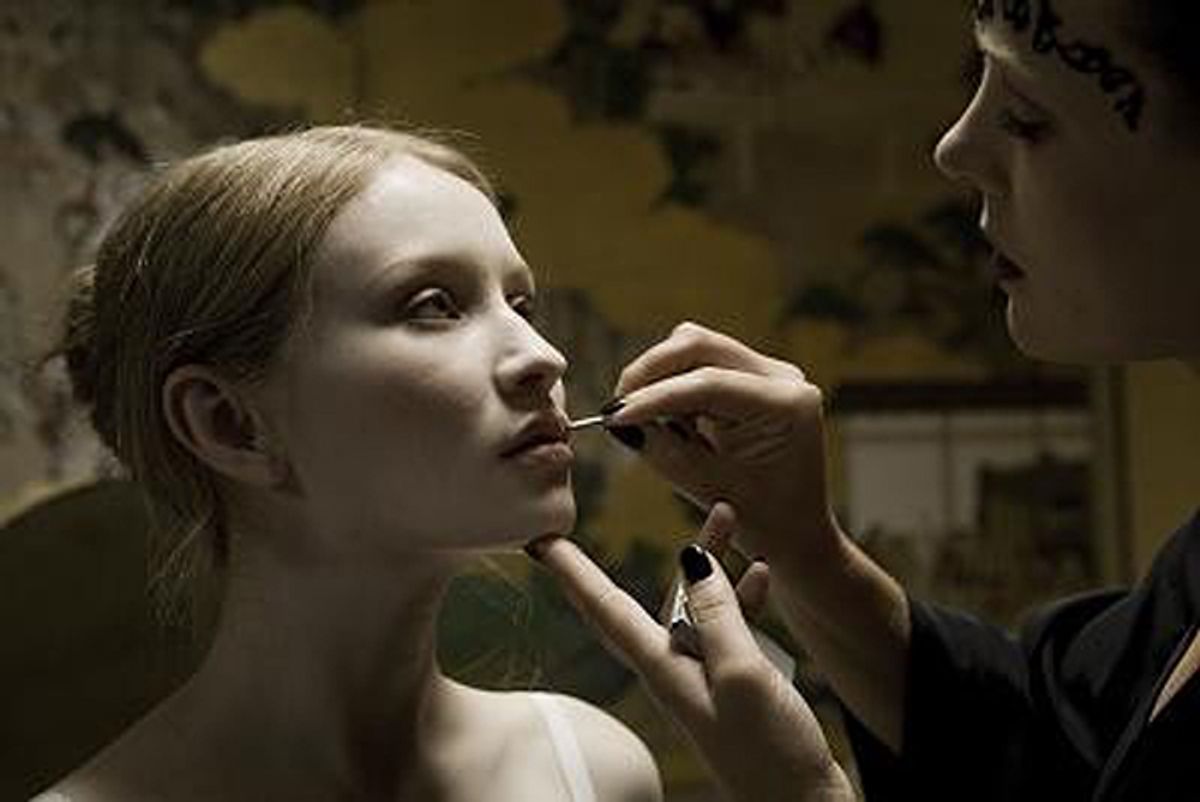 A still from "Sleeping Beauty"
--

CANNES, France -- It's still very early in the 64th edition of the Cannes Film Festival, which means we're all amped on strong coffee and ample sunlight and likely to overpraise (or over-bash) ordinary, flawed motion pictures that seem like Big Events simply because they're here. That said, Australian novelist-turned-filmmaker Julia Leigh's "Sleeping Beauty" -- which plays like a mixture of not-that-softcore porn, Lacanian psychoanalysis and feminist conceptual art -- stands out among the strangeness of this year's Cannes lineup for being really, really strange. Whether it's good-strange or bad-strange is a highly subjective question; I found it gorgeous, opaque and disturbing in roughly equal portions, but it was a riveting experience all the way through.

Emily Browning, the 22-year-old star of "Sucker Punch," returns here in a vastly different kind of movie but with even less clothing. Actually, she wears no clothing at all for much of the film, especially after Lucy, the loose-cannon sexpot she plays, takes a job that involves sleeping with a succession of leathery, repellent, gargoyle-ish older men. "Sleeping with" is not a euphemism in this case; Lucy goes to visit a beautiful, buttoned-up schoolmistress type named Clara (Rachael Blake) and drinks a tea that knocks her out cold for eight to 10 hours. During this time she is subject to the attentions of ancient lechers, but Clara assures her, rather too clinically, that she will not be penetrated: "Your vagina is a temple, my darling."

Lucy doesn't think her vagina is a temple; in fact, she doesn't seem to care too much what happens to it, or to her. We've already seen her offer herself to strangers based on the result of a coin flip, and she meets Clara by working as a lingerie-clad wine waitress at some kind of faintly kinky underground supper club. (It's arguably preferable, and definitely better paid, than the menial jobs and medical guinea-pig work she's otherwise doing.) Browning is indeed a remarkable beauty, with perfect, brilliant-white skin and delicate doll features, and delivers a powerful performance as this self-destructive adventuress. Leigh's assured direction wants to play on all the emotions we may feel toward Lucy, from desire to concern to fear to shame.

Lucy herself mostly seems at home in this sinister, erotically charged landscape, where nothing seems forbidden and her acts do not seem to have consequences. Leigh has created a world that looks like our own, but seems full of secret corridors built by Michel Foucault, the Marquis de Sade, and Pauline Réage, author of "The Story of O." (The chilly, beautiful compositions are the work of Geoffrey Simpson.) But don't get the wrong idea; "Sleeping Beauty" has an atmosphere charged with sexual electricity, but it doesn't have any sex. Lucy has one semi-normal encounter, when she does drugs with a good-looking co-worker and brings him home, but we don't see any of that.

Otherwise this is a fable about frustration and desire, about wanting things and not being able to have them. When told about the no-penetration rule, one of Lucy's geezer clients grumbles, "The only way I can get a hard-on is to eat a truckload of Viagra and have a beautiful woman stick her fingers up my ass. I'm the one that needs the penetration." In a funny, upside-down way, in fact, "Sleeping Beauty" is more about intimate relationships between women than it is about the corrosive marketplace of heterosexuality. Every time Lucy is in the frame with another female character, the moment seems loaded with all sorts of potential energy that almost but doesn't quite explode, whether that's narcissism or sexual attraction or violence or psychological breakdown or some combination thereof.

I halfway suspect that if we could fully grasp Leigh's intentions here they might sound didactic: a parable about how women's lives have become sexual commodities and too often they repress their true emotions and participate in their own oppression, etc. But she isn't delivering a lecture and doesn't quite want us to understand "Sleeping Beauty," which isn't actually based on a fairy tale but definitely has the compelling undertow of one. This movie isn't exactly overflowing with warmth and human goodness, and its mixed reaction here speaks to the fact that it will strike many people as simultaneously too chilly and too pervy, but it's a strikingly impressive debut.