Why isn't Wall Street in prison?

A financial journalist argues that crimes haven't been committed. So how does justice get served? 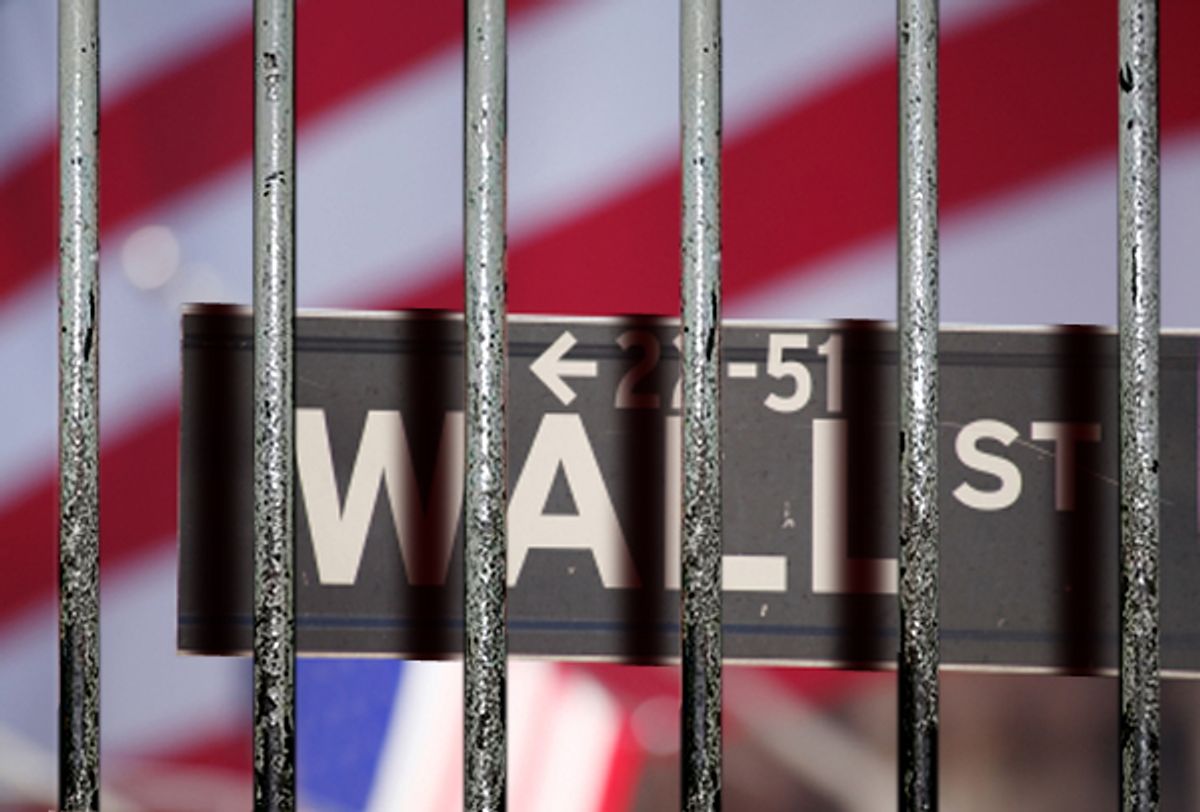 There's being provocative, and then there's getting down on your knees and absolutely begging for a nasty backlash. Business journalist and author Roger Lowenstein aims for the latter in a long piece for Bloomberg BusinessWeek exploring the degree of criminal culpability, (or lack thereof) that Wall Street financial institution executives deserve for their role in detonating the Great Recession. The headline tells the tale: "Wall Street: Not Guilty: Why have no executives gone to jail for their roles in the financial crisis? Perhaps because risk-taking and stupidity aren't criminal."

Lowenstein's argument, to put it mildly, isn't one that Americans of nearly any political persuasion want to hear. In large part due to the actions of a relatively small number of highly compensated bankers, millions of Americans lost their jobs and houses. Frontier justice demands a scalp!

Taken from the top, these sentiments imply that the financial crisis was caused by fraud; that people who take big risks should be subject to a criminal investigation; that executives of large financial firms should be criminal suspects after a crash; that public revulsion indicates likely culpability; that it is inconceivable (to Madoff, anyway) that people could lose so much money absent a conspiracy; and that Wall Street bears collective guilt for which a large part of it should be incarcerated.

These assumptions do violence to our system of justice and hinder our understanding of the crisis. The claim that it was "caused by financial fraud" is debatable, but the weight of the evidence is strongly against it. The financial crisis was accompanied by fraud, on the part of mortgage applicants as well as banks. It was caused, more nearly, by a speculative bubble in mortgages, in which bankers, applicants, investors, and regulators were all blind to risk. More broadly, the crash was the result of a tendency in our financial culture, especially after a period of buoyancy, to push leverage and risk-taking to the extreme.

Lowenstein may err on the side of overstating the case for how innocent Wall Street executives are, and seems to be especially willing to believe that the CEOs in question really didn't understand what kind of trouble they were getting into, but much as it pains me to do so, I have to admit that I don't think his thesis is fundamentally wrong. One of the most galling aspects of the financial crisis is the fact that so much of the behavior that precipitated it was explicitly legal. The crooks rigged the system so that they weren't, technically speaking, crooks. This is beyond maddening.

For decades, both Republican and Democratic administrations steered financial sector policy in a deregulatory direction that all but guaranteed an eventual crash. Imagine letting a pack of two-year old boys run loose in your house without supervision. After a few hours, you will have a big mess, but who is more responsible for that -- the screaming toddlers, or the parents who failed to exercise oversight?

Americans want vengeance for the wrongs that have been done them, but I'm not even sure that jailing a few CEOs is the best way to get revenge. The underlying problem here isn't necessarily that CEOs are breaking the law, it's that the financial sector has such a disproportionately large role in the U.S. economy. We need changes in incentive structures that penalize traders for taking on too much risk. Or new taxes on financial transactions that inhibit rank speculation. Or new regulations that simply reduce the profitability of banking and steer talent towards more productive enterprises.

If the incentive structures that encourage big risk taking stay in place, all the criminal prosecutions in the world aren't going to do much good. And if we're looking for a real crime, taking place right now, then we should focus on Washington, not Wall Street, where a weak attempt to re-regulate the banking industry -- Dodd-Frank -- is under continual, unremitting assault from Wall Street lobbyists and Republican legislators.

A mild attempt to constrain the irresponsible risk-taking of financial institutions is being gutted before our eyes... Shouldn't there be a law against that?