Construction of a wall was completed under Obama, and he's poised to spend millions more on sensors and cameras 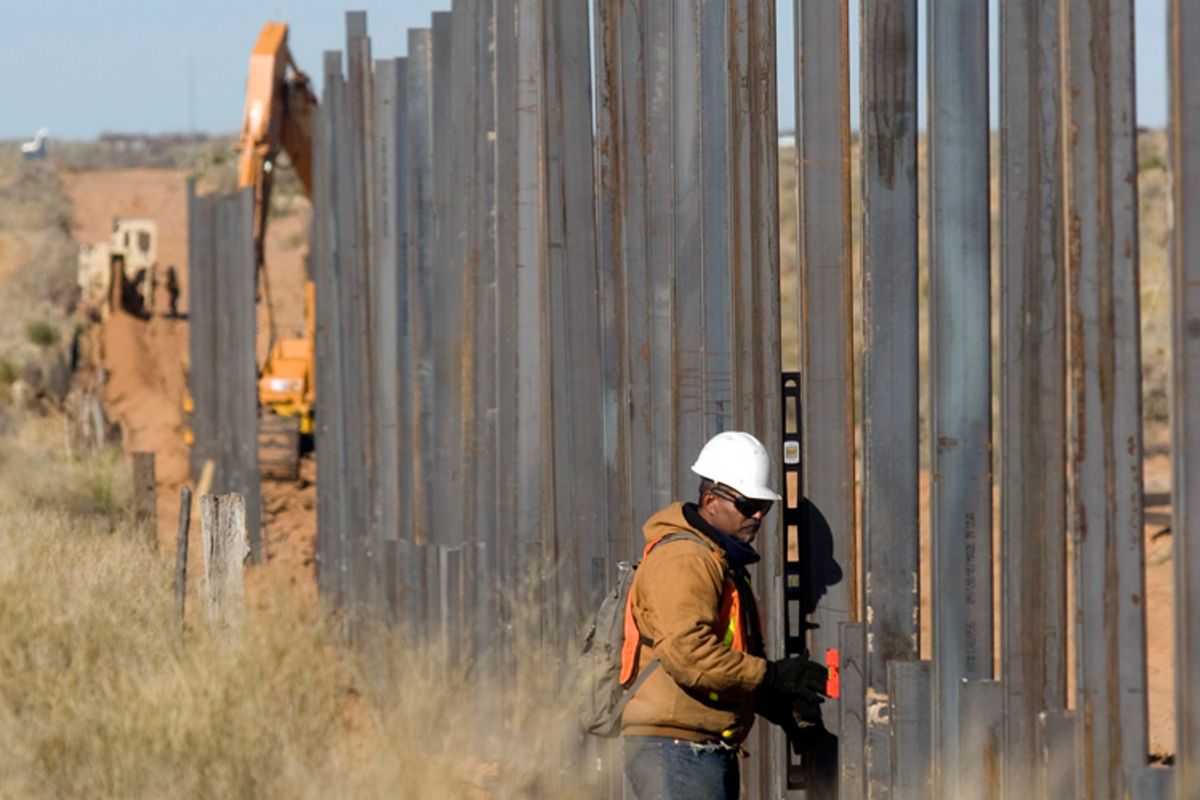 U.S. workers build a section of the Mexico-U.S. border wall near the Jeronimo-Santa Teresa border crossing in Chihuahua.
--

President Obama traveled to El Paso, Texas, this week and delivered an immigration speech that was widely viewed as an appeal to Hispanic voters.

While there's virtually no prospect of comprehensive immigration reform getting through the current Congress, the Obama administration has been emphasizing enforcement and border security. One under-examined aspect of the administration's policy is the continuation of Clinton- and Bush-era efforts to build a physical -- and virtual -- fence along the U.S.-Mexico border. In El Paso, Obama actually touted the fact that his administration had completed the fence. So we thought it was a good time to check in on the status of the fence, whether it's working, and what's planned for the future.

Billions of dollars have been spent in recent years on a physical wall and the so-called virtual fence, and the efforts have been criticized by some who live on the border on human rights and environmental grounds.

Lee Maril, professor of sociology at East Carolina University, recently published "The Fence," a study of U.S. policy on the border going back to the Clinton administration. Obama, Maril told me in an interview this week, has largely followed the policy conceptions of the Bush administration when it comes to the border fence. The administration is poised to plunk down hundreds of millions of dollars on high-tech sensors and the like, in the latest costly iteration of the virtual fence. What follows is a transcript of our conversation edited for length and clarity.

I think a lot of people assume there already is a fence or wall along the entire U.S.-Mexico border. What actually exists on the border right now?

Most people who haven't been to the border imagine it as sort of a straight line. But it's 2,000 miles, much of which is very rough terrain, including high-elevation areas, the Rio Grande River delta, and canyons. There are two kinds of fences that have been built. One is nuts-and-bolts, concrete and rebar. It's in pieces and covers about 650 miles of the border. The rest of the border is not covered by any fence that would stop anyone. Geography does the stopping. In places it's barbed wire, and in places there is no fence at all.

The virtual fence is the second kind of fence that is sometimes discussed. That began with ISIS ["Integrated Surveillance Intelligence System"] in 1998 and ended with a project by Boeing that was recently killed. The virtual fence is an attempt to use high technology to interdict drug loads, catch alleged terrorists, and catch undocumented immigrants. The virtual fence never worked. It didn't work when it was started in 1998 under the Clinton administration, and the company that originally worked on it, L-3 Communications, wasted about $250 million. It didn't work under Boeing either. They walked away with about $1 billion.

How was the virtual fence supposed to work?

It started under the Clinton administration as an attempt to build a sophisticated system of towers that would be linked with computers, satellite up-links, surface radar, and all kinds of fancy cameras. That ran from 1998 to 2000, and it didn't work. Then the program changed names several times and wound up in 2005 being called SBInet, or Security Border Initiative network. That's when Boeing was invited on as the so-called systems integrator. They were supposed to come up with a total solution to plan, design and build the virtual fence for the entire border. They built only about ten sensor towers and fifteen communications towers, but according to the Government Accountability Office reports none of them ever worked. In my opinion they wasted more than $1 billion of taxpayer money.

Where has Obama been on this?

The original policy was clearly defined by the Bush administration and by Congress. It was formed immediately after the immigration field hearings in the summer of 2006. The virtual and physical fences had three justifications under the Bush administration, which were then carried on into the Obama administration. The goals were to decrease the number of undocumented workers, to increase the drug interdictions, and to stop alleged terrorists. They were never refuted by Obama. That plan was wholeheartedly accepted by the Obama administration. Under Obama we saw the completion of the project to build about 650 miles of physical wall that had been funded by Congress. When I heard Obama's speech in El Paso, what I saw missing was any kind of admittance that the virtual fence was a miserable failure and the taxpayers had lost all this money.

You spent a lot of time on the border, looking at the fence and interviewing residents and border agents. What did you hear?

They tell you a variety of things depending on who you talk to. I can tell you that the concrete fence is not consistent. I went to Cameron County, Texas, where Brownsville is, and there the fence is 20 feet tall with a 5-foot base that goes 8 feet into the ground, with spaced steel bars at the top. Then I went to the University of Texas at Brownsville, and because they litigated against the Department of Homeland Security, they have a fence that is about 9 feet tall, chain link, painted green, and surrounded by shrubbery. That runs for half a mile. What that tells me is that regardless of what DHS wanted to do, it was always buffered by the local political situation.

So after Obama's speech, are you expecting an extension of the fence?

They just let out bids for $750 million, just for Arizona, to basically do what they said they were going to do with the last virtual wall -- for the same kinds of equipment, including sensors, scope trucks, plus some newer hardware. It’s called the Alternative Southwest Border Technology Plan. I wouldn’t call it a "Plan," I’d call it an approach. What I've heard unofficially is that one of the primary contractors who is very interested is Raytheon. So even more money, another $750 million, has now been put into it and already been bid out and the public has not yet been notified of who is getting the bid. It's very unclear if this equipment is going to be used as part of a virtual wall, or as extra equipment to supplement the concrete wall. This is just for Arizona. What DHS is really saying is that after eleven years, they still haven’t gotten it right.

Has the fence worked?

There are three points. The first is that it has not in any way I can clearly see -- based on the border patrol's own statistics -- limited the amount of drugs coming into this country. Obama is correct when he cites the statistic that there have been a third more drugs caught this year than last. But the drug cartels are just taking that as overhead. They're still bringing in and getting across the same amount of drugs. My informants in law enforcement tell me the best way to assess the volume of drugs is the price on the street. The price on the street suggests there has been no change with respect to cocaine, marijuana and methamphetamine. The traffickers have become very innovative in finding ways to cross the wall which at first looks impenetrable. That includes catapults, tunnels and metal ramps that they assemble and disassemble very quickly.

Second, the fence certainly has seemed to affect the number of undocumented workers. It's much harder to cross the border than it used to be because of the fence, and the increase in border agents. There is no question in that. That said, we're in the middle of a recession, so it's very difficult to see what will happen when we come out of the recession when it comes to the economic "pull" factors. We still have a very large number of people in Mexico and south of Mexico who can directly benefit by coming across illegally because they don't have a lot of other options.

The third part -- which Obama didn't mention in El Paso and has been forgotten in this whole discussion -- is terrorism. I can find no known public record of any terrorist ever being stopped since 2005-06 when construction of the wall began. That was one of the three major reasons that the wall was built. What my law enforcement informants tell me is that a terrorist group would be foolish to risk bringing someone in from Mexico when they can come in from so many other places with false documents.