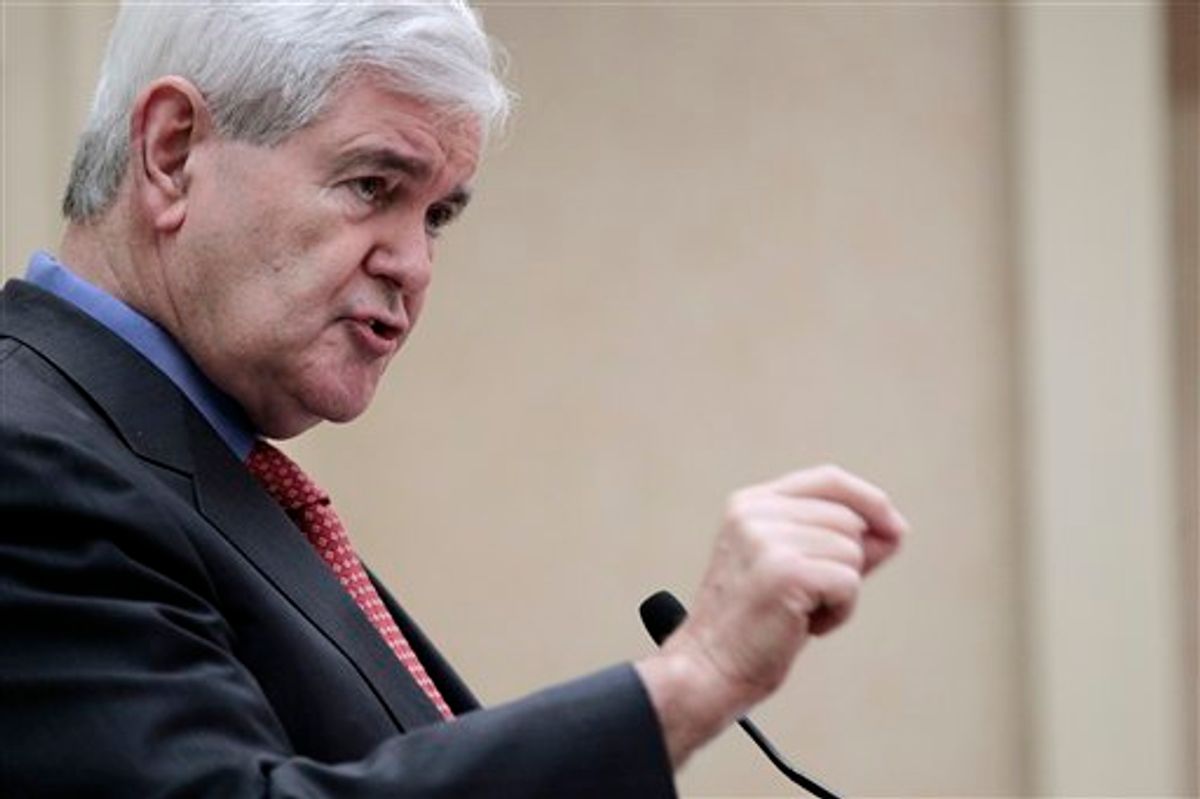 Republican Newt Gingrich told a Georgia audience on Friday evening that the 2012 presidential election is the most consequential since the 1860 race that elected Abraham Lincoln to the White House and was soon followed by the Civil War.

Addressing the Georgia Republican Party's convention, Gingrich said the nation is at a crossroads and that the re-election of Democratic President Barack Obama would lead to four more years of "radical left-wing values" that would drive the nation to ruin.

The former House speaker gave his speech at the end of a day of campaigning that took him from a gathering of economic conservatives in Washington to an old-style restaurant in Georgia and then the evening gathering of the party faithful.

Gingrich received a warm welcome at the GOP dinner. He represented Georgia in Congress for two decades and is stressing his ties anew after having lived in northern Virginia for more than a decade.

"I am glad to be home," Gingrich said Friday evening.

On economic issues, the 67-year-old Gingrich said his program would lead to more paychecks.

He outlined a jobs plan that would eliminate the estate and capital gains taxes and lower the corporate tax rate, which he said would infuse the nation's sputtering economy with new investment.

He said the United States needs to reexamine its relationship with Pakistan after revelations that Osama bin Laden had been hiding out there for years as America poured billions of dollars in aid into the country.

"I was trying to figure out what the word ally meant," Gingrich said. "I know what the word sucker meant. How stupid do you think we are?"

In an interview with The Associated Press earlier Friday Gingrich said he's grown more mature since his days as House speaker, and before that, when he was often described as a bomb-throwing insurgent member of the House Republican minority. He said it took him two years after taking the reins in Congress to learn that he had to re-calibrate his style and change his message.

And by then, he said, "the damage had been done."

"There are the things you want to say and what you need to say," Gingrich told The AP.

Some have questioned whether Gingrich-- known for his combative style and what some consider over-the-top rhetoric -- has the temperament and discipline to be president.

Last year, he suggested U.S. Supreme Court nominee Sonia Sotomayor was a racist, said Obama is best understood by his "Kenyan, anti-colonial behavior," and argued that placing a mosque near ground zero in New York City was akin to placing a Nazi sign next to the Holocaust Museum

Earlier Friday, at a speech before a gathering of economic conservatives in Washington, Gingrich said General Electric's aggressive legal and accounting strategy, which led to reports of a zero corporate tax liability last year, was a clever and rational response to the nation's high tax rates.

Saying he wanted to slash an array of taxes and bureaucracies, Gingrich praised the author of the "Laffer Curve," an economic theory that says unless taxes are kept low, individuals and corporations will invest less and seek ways to avoid paying taxes.

Gingrich said the 35 percent corporate tax rate should be cut to 12.5 percent. He cited GE's "remarkably rational behavior in recognizing the corporate tax rate is clearly past the Laffer curve point. And so 375 tax lawyers in the largest tax department in the world" devised "a very clever strategy which enabled General Electric to pay zero corporate taxes."

After news organizations reported that GE might pay no corporate taxes for 2010, the company stated that it expects a "small U.S. income tax liability" for that year.

GE and others would pay more in taxes at a 12.5 percent rate because they would consider it more fair and rational, Gingrich contended. He also urged eliminating the estate tax and extending former President George W. Bush's income tax cuts for high earners beyond 2013.

Expanding on his remarks, Gingrich told The AP it would be "absurd" to expect that any company would pay more than it legally had to. And he blamed the Obama administration for adopting a patchwork of tax credits and loopholes that effectively encourage companies to hire lawyers to manipulate their returns.

"You should lower the tax rate and fire the lawyers," he said.

Asked if he would encourage other companies to exploit loopholes to keep their taxes down, the author and one-time college professor said, "They already do."

Gingrich also called on Congress to defund the National Labor Relations Board if it continues to pursue a complaint against Boeing Co.

The complaint says Boeing illegally retaliated for a 2008 strike by adding a non-union assembly line in South Carolina for 787 passenger jets. Most of that work is now done in Washington state by union workers.

Gingrich was in Georgia on a day when Gov. Nathan Deal -- a key supporter and former House member-- signed a tough immigration law with some similarities to Arizona's controversial law.

He said he had not read the law so he could not comment on it, but that he generally supported states and localities being able to enforce the law.

Gingrich has made efforts to reach out to Hispanic voters and said he doesn't think that the tough GOP stance on illegal immigration has alienated the fast-growing minority group. "I do think we will have to work very hard to get that vote," he said.

"Obama has to answer the question: he's had two years to pass a bill and he never made it a priority. Why should they trust that he will now?" he said.

Former Arkansas Gov., Mike Huckabee is set to announce on Saturday whether he will enter the Republican race for president.

Gingrich said he did not know what Huckabee would decide. But he said if Huckabee declines to run "I suspect it will make the road ahead for us somewhat easier."