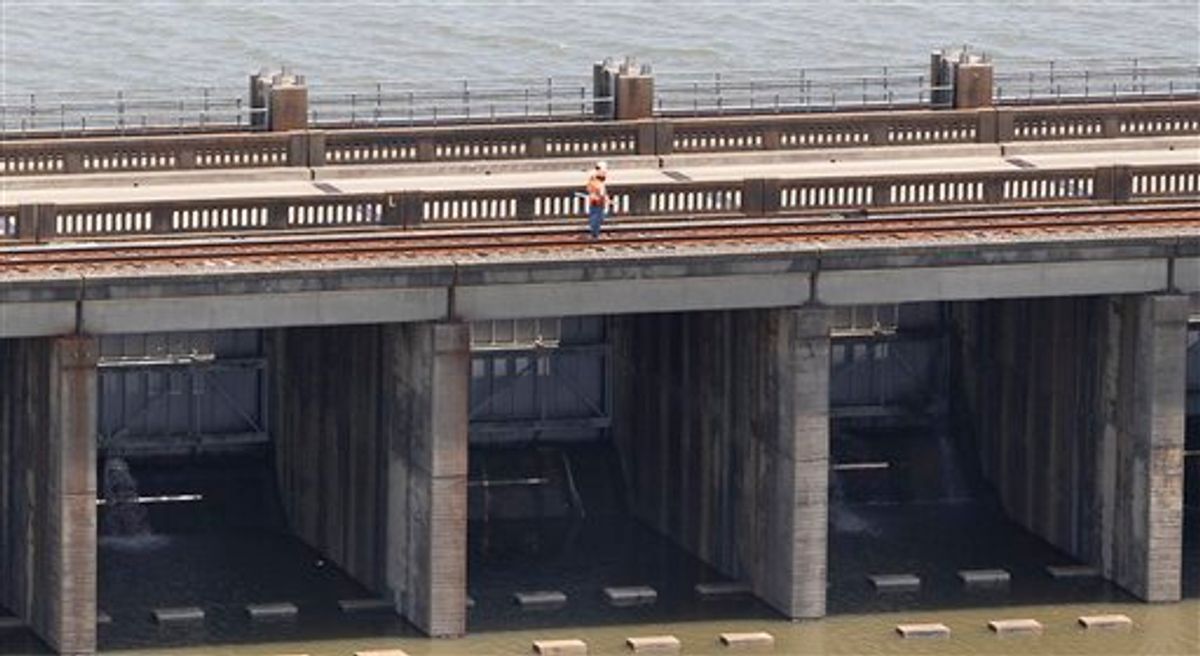 Workers stand atop the Morganza Spillway in Morganza, La., Thursday, May 12, 2011, as water seeps through, bottom, during an aerial tour of areas that may be affected by flooding if the spillway is opened. (AP Photo/Patrick Semansky) (AP)
--

Army engineers prepared Saturday to slowly open the gates of an emergency spillway along the rising Mississippi River, diverting floodwaters from Baton Rouge and New Orleans, yet inundating homes and farms in parts of Louisiana's populated Cajun country.

About 25,000 people and 11,000 structures could be in harm's way when the Morganza spillway is unlocked for the first time in 38 years. Sheriffs and National Guardsmen were warning people in a door-to-door sweep through the area, and shelters were ready to accept up to 4,800 evacuees, Gov. Bobby Jindal said.

Some people living in the threatened stretch of countryside -- an area known for small farms, fish camps and a drawling French dialect -- have already started fleeing for higher ground.

Opening the spillway will release a torrent that could submerge about 3,000 square miles under as much as 25 feet of water in some areas but take the pressure off the downstream levees protecting New Orleans, Baton Rouge and the numerous oil refineries and chemical plants along the lower reaches of the Mississippi.

"Protecting lives is the No. 1 priority," Army Corps of Engineers Maj. Gen. Michael Walsh said at a news conference aboard a vessel on the river at Vicksburg. A few hours later, the corps made the decision to open the key spillway and inundate thousands of homes and farms in Louisiana's Cajun country to avert a potentially bigger disaster in Baton Rouge and New Orleans.

Engineers feared that weeks of pressure on the levees could cause them to fail, swamping New Orleans under as much as 20 feet of water in a disaster that would have been much worse than Hurricane Katrina in 2005.

Instead, the water will flow 20 miles south into the Atchafalaya Basin. From there it will roll on to Morgan City, an oil-and-seafood hub and a community of 12,000, and eventually into the Gulf of Mexico, flooding swamps and croplands.

A sliver of land north of Morgan City, about 70 miles long and 20 miles wide, was expected to be inundated with 10- to 20-feet of water, according to Army Corps of Engineers estimates. It will take hours and days for the water to run south, and wasn't expected to reach Morgan City until around Tuesday. Still, the city has already taken steps to shore up its levee.

The corps employed a similar cities-first strategy earlier this month when it blew up a levee in Missouri -- inundating an estimated 200 square miles of farmland and damaging or destroying about 100 homes -- to take the pressure off the levees protecting the town of Cairo, Ill., population 2,800.

The disaster was averted in Cairo, a bottleneck where the Ohio and Mississippi rivers meet.

This intentional flood is more controlled, however, and residents are warned by the corps each year in written letters, reminding them of the possibility of opening the spillway, which is 4,000 feet long and has 125 gate bays.

The spillway, built in 1954, is part of a flood plan largely put into motion in the 1930s in the aftermath of the devastating 1927 flood that killed hundreds.

It is set to be opened when a flow rate of 1.5 million cubic feet per second is reached and projected to rise. Just north of the spillway at Red River Landing, the river had reached that flow rate, according to the National Weather Service.

To put things in perspective, corps engineer Jerry Smith crunched some numbers and found that the amount of water flowing past Vicksburg, Miss., would fill the Superdome, where the NFL's New Orleans Saints play, in 50 seconds.

This is the second spillway to be opened in Louisiana. About a week ago, the corps used cranes to remove some of the Bonnet Carre's wooden barriers, sending water into the massive Lake Ponchatrian and eventually the Gulf of Mexico.

That spillway, which the corps built about 30 miles upriver from New Orleans in response to the flood of 1927, was last opened in 2008. May 9 marked the 10th time it has been opened since the structure was completed in 1931. The spillways could be opened for weeks, or perhaps less, if the river flow starts to subside.

Deputies are also living at Eagle Lake, a community north of Vicksburg that was evacuated and is now isolated. And U.S. Highway 61, a major north-south route has been cut off by water, affecting thousands of people, Pace said.

Meanwhile, farmers along the lower Mississippi had been expecting a big year with crop prices skyrocketing, but now many are facing ruin, with floodwaters swallowing up corn, cotton, rice and soybean fields.

In far northeastern Louisiana, where Tap Parker and about 50 other farmers filled and stacked massive sandbags along an old levee to no avail. The Mississippi flowed over the top and nearly 19 square miles of soybeans and corn, known in the industry as "green gold," was lost.

"This was supposed to be our good year. We had a chance to really catch up. Now we're scrambling to break even," said Parker, who has been farming since 1985.

Cotton prices are up 86 percent from a year ago, and corn -- which is feed for livestock, a major ingredient in cereals and soft drinks, and the raw material used to produce ethanol -- is up 80 percent. Soybeans have risen 39 percent. The increase is attributed, in part, to worldwide demand, crop-damaging weather elsewhere and rising production of ethanol.

While the Mississippi River flooding has not had any immediate impact on prices in the supermarket, the long-term effects are still unknown. A full damage assessment can't be made until the water has receded in many places.

Some of the estimates have been dire, though.

More than 1,500 square miles of farmland in Arkansas, which produces about half of the nation's rice, have been swamped over the past few weeks. In Missouri, where a levee was intentionally blown open to ease the flood threat in the town of Cairo, Ill., more than 200 square miles of croplands were submerged, damage that will probably exceed $100 million. More than 2,100 square miles could flood in Mississippi.

When the water level goes down -- and that could take many weeks in some places -- farmers can expect to find the soil washed away or their fields covered with sand. Some will probably replant on the soggy soil, but they will be behind their normal growing schedule, which could hurt yields.

Many farmers have crop insurance, but it won't be enough to cover their losses. And it won't even come close to what they could have expected with a bumper crop.

"I might get enough money from insurance to take us to a movie, but it better be dollar night," said Karsten Simrall, who lives in Redwood, Miss.

Simrall's family has farmed the low-lying fields in Redwood for five generations and has been fighting floods for years, but it's never been this bad. And the river is not expected to crest here until around Tuesday.

"How the hell do you recoup all these losses?" he said. "You just wait. It's in God's hands."

The river's rise may also force the closing of the river to shipping, from Baton Rouge to the mouth of the Mississippi, as early as next week. That would cause grain barges from the heartland to stack up along with other commodities.

If the portion is closed, the U.S. economy could lose hundreds of millions of dollars a day. In 2008, a 100-mile stretch of the river was closed for six days after a tugboat collided with a tanker, spilling about 500,000 gallons of fuel. The Port of New Orleans estimated the shutdown cost the economy up to $275 million a day.