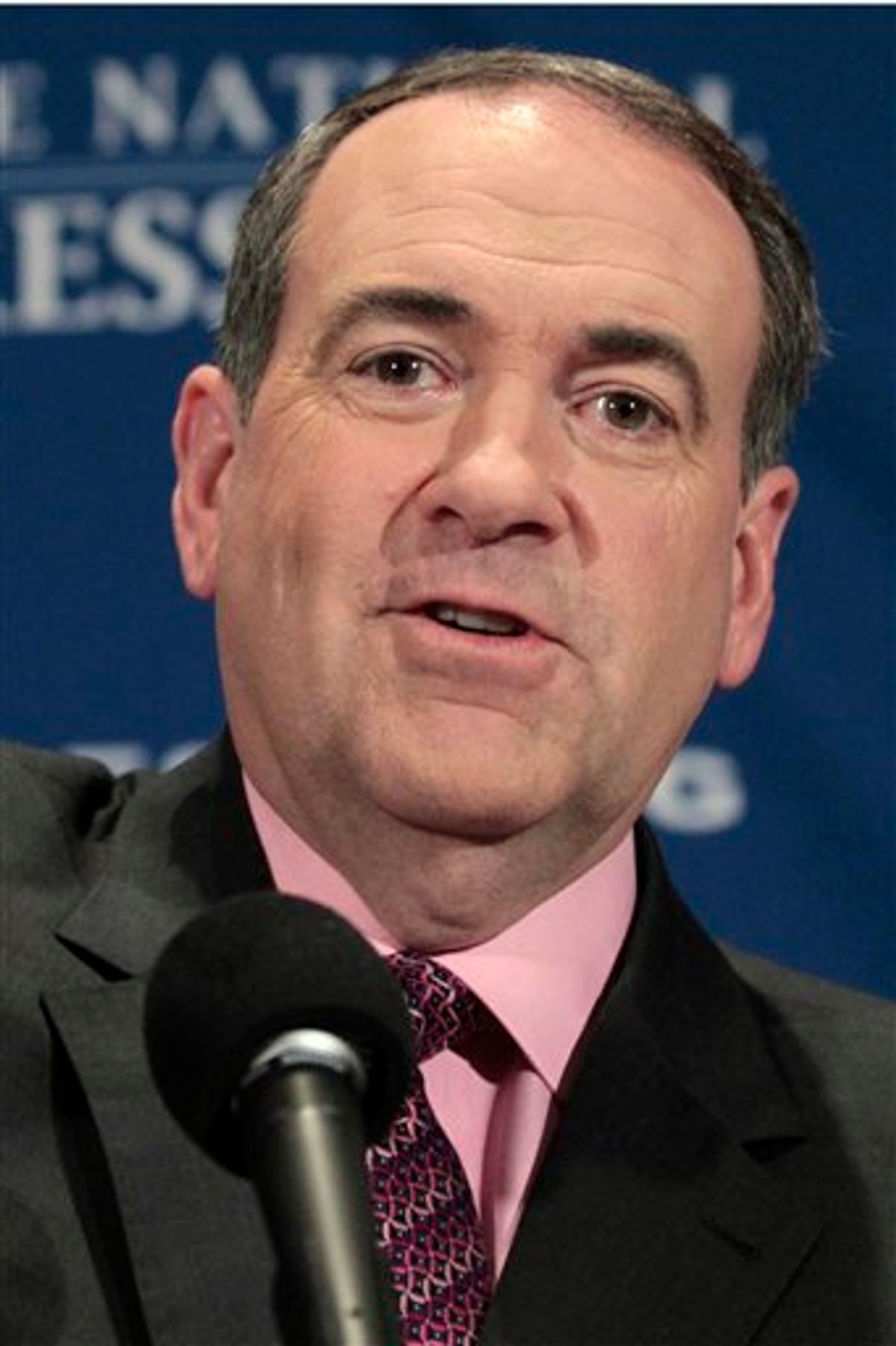 FILE - This Feb. 24, 2011 file photo shows former Arkansas Gov. Mike Huckabee in Washington. Huckabee's decision on whether to move toward another run for president -- which he'll announce on his television show Saturday night, May 14, 2011 -- may come down to whether he's willing to cut back those revenue streams to put his political career first again. His top advisers say he hasn't told them what he'll do, which makes them think he's probably going to stick with the money, rather than go for the White House. (AP Photo/Alex Brandon, File) (AP)
--

After doing his best to build suspense for it, Mike Huckabee used his Saturday night show on Fox News -- "Huckabee" -- to declare that he will not seek the presidency in 2012.

The decision is significant because Huckabee loomed as a formidable contender on the GOP side. Had he run, he might actually have been considered the frontrunner.

Since his 2008 campaign, in which he performed far better than anyone had expected, Huckabee had worked to broaden his appeal -- which was limited mainly to religious conservatives -- through his Fox program and frequent appearances on talk shows, like Jon Stewart's "Daily Show." The gambit seemed to be working; a poll conducted a few months ago found the former Arkansas governor to be the most popular national figure among Republicans. He also generally performed better against President Obama in trial heats than any other GOP prospect.

As a candidate, Huckabee would have been the clear favorite in the lead-off caucus state of Iowa, where he finished first in '08.

Huckabee's absence will leave Republicans (at least for now) with relatively few candidates who have plausible chances of capturing the nomination. Mitt Romney and Tim Pawlenty fall into this category, and Mitch Daniels will too if he runs. And maybe, if you're feeling generous, you could include Jon Huntsman. But besides them, the GOP field is littered with niche candidates defined by narrow ideological appeal and/or polarizing personal traits -- Newt Gingrich, Michele Bachmann, Rick Santorum, Herman Cain, Ron Paul, and so on.

Huckabee is only 54 and will presumably remain visible in the national media well into the future. And he remains an immensely popular figure to many Christian conservatives. If Republicans fail to take back the White House next year, his name will presumably figure in the 2016 mix. But for now, he's out -- and the GOP has one fewer realistic option for a '12 standard-bearer.