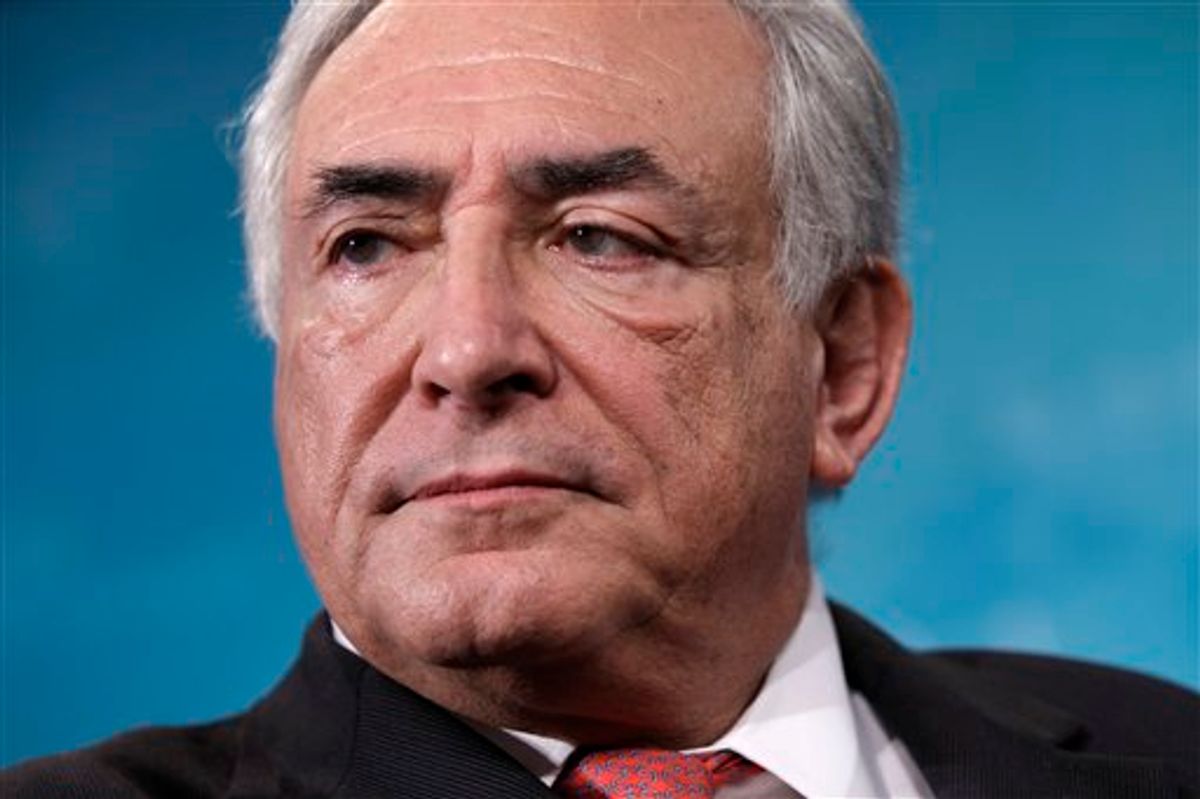 The leader of the International Monetary Fund and a possible candidate for president of France was yanked from an airplane moments before it was to depart for Paris and arrested in the alleged sexual assault of a hotel maid, police said.

Dominique Strauss-Kahn, 62, was arrested on charges of a criminal sex act, attempted rape and unlawful imprisonment. He had been taken off the Air France flight at John F. Kennedy International Airport on Saturday afternoon by officers from the Port Authority of New York and New Jersey and was turned over to New York police, said Paul J. Browne, New York Police Department spokesman.

Strauss-Kahn's lawyer, Benjamin Brafman, told The Associated Press that his client will plead not guilty at his expected Sunday afternoon arraignment.

"He denies all the charges against him," Brafman said. "And that's all I can really say right now."

France woke to the bombshell news Sunday to surprise and a degree of caution. Online commentators questioned whether the incident could have been part of a smear campaign by the unpopular President Nicolas Sarkozy, whose political fortunes have been flagging, against his primary rival in the race for next year's presidential elections.

The arrest could shake up the race for president next year, and throw the long-divided Socialists back into disarray about who they could present as a challenger to Sarkozy.

"It's a cross that will be difficult for him to bear," said Dominique Paille, a political rival to Strauss-Kahn on the center right, on BFM television.

"It's totally hallucinating. If it is true, this would be a historic moment, but in the negative sense, for French political life," Paille said. Still, he urged, "I hope that everyone respects the presumption of innocence. I cannot manage to believe this affair."

The 32-year-old woman told authorities that she entered Strauss-Kahn's suite at the luxury Sofitel hotel not far from Manhattan's Times Square at about 1 p.m. Eastern time (1600 GMT) Saturday and he attacked her, Browne said. She said she had been told to clean the spacious $3,000-a-night suite, which she had been told was empty.

According to an account the woman provided to police, Strauss-Kahn emerged from the bathroom naked, chased her down a hallway and pulled her into a bedroom, where he began to sexually assault her. She said she fought him off, then he dragged her into the bathroom, where he forced her to perform oral sex on him and tried to remove her underwear. The woman was able to break free again and escaped the room and told hotel staff what had happened, authorities said. They called police.

When detectives arrived moments later, Strauss-Kahn had already left the hotel, leaving behind his cellphone, Browne said. "It looked like he got out of there in a hurry," Browne said.

The NYPD discovered he was at the airport and contacted Port Authority officials, who plucked Strauss-Kahn from first class on the Air France flight that was just about to leave the gate.

The maid was taken by police to a hospital and being treated for minor injuries. John Sheehan, a spokesman for the hotel, said its staff was cooperating in the investigation.

In 2008, Strauss-Kahn, a married father of four, was briefly investigated over whether he had an improper relationship with a subordinate female employee. The IMF board found his actions "regrettable" and said they "reflected a serious error of judgment."

Caroline Atkinson, an IMF spokeswoman, issued a statement Sunday that said the agency would have no comment on the New York case. She referred all inquiries to Strauss-Kahn's personal lawyer and said the "IMF remains fully functioning and operational."

Strauss-Kahn's offices in Paris couldn't be reached when the news broke overnight in France. One of his allies, Jean-Marie Le Guen, expressed doubt about the incident.

Strauss-Kahn was supposed to be meeting in Berlin on Sunday with German Chancellor Angela Merkel about aid to debt-laden Greece, and then join EU finance ministers in Brussels on Monday and Tuesday. The IMF is responsible for one-third of Greece's existing loan package, and his expected presence at these meetings underlined the gravity of the Greek crisis.

Strauss-Kahn took over as head of the IMF in November 2007. The 187-nation lending agency is headquartered in Washington and provides help in the form of emergency loans for countries facing severe financial problems.

Strauss-Kahn won praise for his leadership at the IMF during the financial crisis of 2008 and the severe global recession that followed.

More recently, he has directed the IMF's participation in bailout efforts to keep a European debt crisis which began in Greece from destabilizing the global economy.

In October 2008, Strauss-Kahn issued an apology to the IMF staff after accusations that he had a sexual relationship with an IMF subordinate.

He wrote in an email to IMF staff that he made "an error in judgment" but didn't abuse his position.

The board found that the relationship was consensual. The IMF employee left the fund and took a job with the European Bank for Reconstruction and Development.

Before taking the top post at the IMF, Strauss-Kahn had been a member of the French National Assembly and had also served as France's Minister of Economy, Finance and Industry from June 1997 to November 1999.

He had been viewed as a leading contender to run on the Socialist Party's ticket to challenge the re-election of French President Nicolas Sarkozy next year.

Strauss-Kahn was seen as the strongest possible challenger to Sarkozy. Strauss-Kahn has not declared his candidacy, staying vague in interviews while feeding speculation that he wants France's top job.

The New York accusations come amid French media reports about Strauss-Kahn's lifestyle, including luxury cars and suits, that some have dubbed a smear campaign.

He is known as DSK in France, but media there also have dubbed him "the great seducer." His reputation as a charmer of women has not hurt his career in France, where politicians' private lives traditionally come under less scrutiny than in the United States.

He sought the Socialist Party's endorsement in the last elections, in 2007, but came in second in a primary to Segolene Royal. Royal, the first woman to get so close to France's presidency, lost to Sarkozy in the runoff.

After Sarkozy won, the new president championed Strauss-Kahn as a candidate to run the IMF. Sarkozy's backers touted the move as a sign of the conservative president's campaign of openness to leftists -- but political strategists saw it as a way for Sarkozy to get a potential challenger far away from the French limelight.

Royal, who continues to harbor presidential ambitions of her own, remained prudent Sunday about the allegations, saying Strauss-Kahn has the right to the presumption of innocence.

"My thoughts go to the man in this difficult time and to his family," she said. "We are in a Democracy and must let justice do its work. Everybody must stay calm."

The global financial crisis thrust Strauss-Kahn into an unexpectedly prominent role and boosted his global standing in time to consider a 2012 French presidential bid.

He is credited with preparing France for the adoption of the euro by taming its deficit and persuading then-Prime Minister Lionel Jospin to sign up to an EU pact of fiscal prudence.

A former economics professor, Strauss-Kahn joined the Socialist party in 1976 and was elected to parliament in 1986 from the Val-d'Oise district, north of Paris. He went on to become mayor of Sarcelles, a working-class immigrant suburb of Paris.