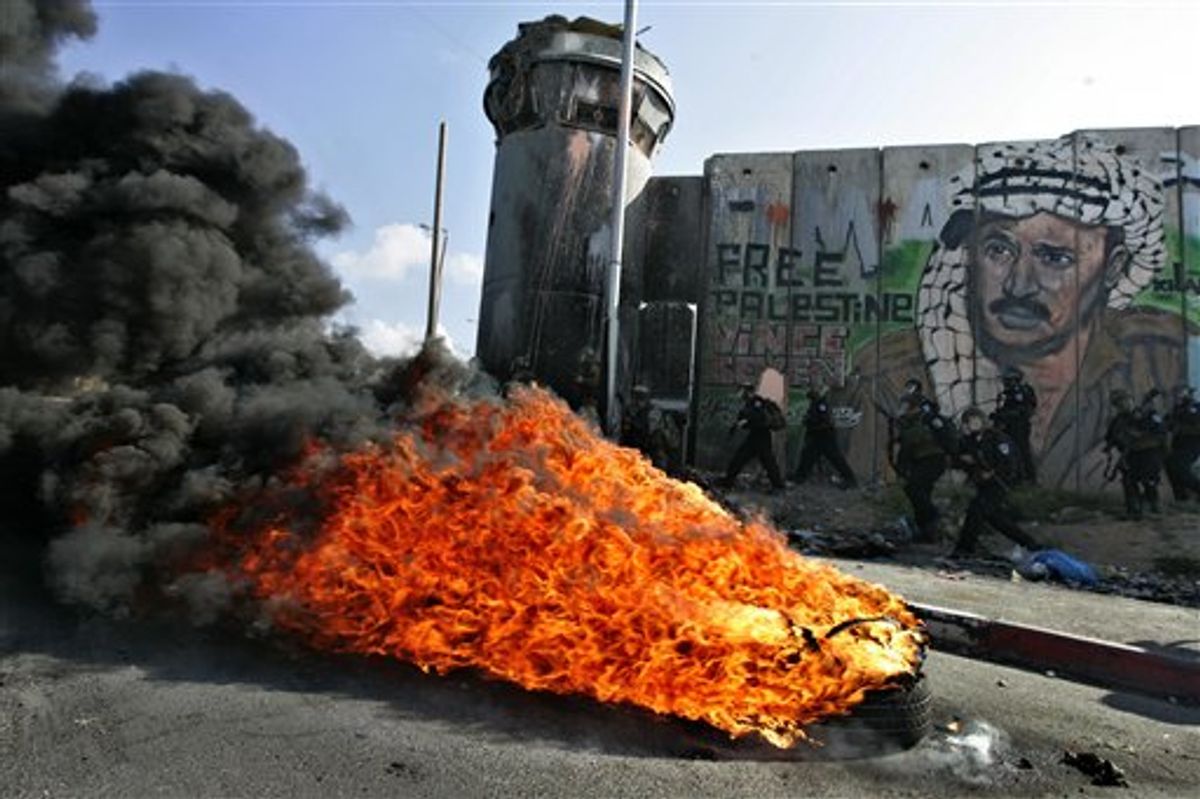 Israeli soldiers run past burning tires under a mural of the late Palestinian leader Yasser Arafat during clashes with Palestinian stone throwers following a protest to mark the upcoming 63rd anniversary of "Nakba", Arabic for "Catastrophe", the term used to mark the events leading to Israel's founding in 1948, in the Qalandia checkpoint between Ramallah and Jerusalem, Saturday, May 14, 2011.(AP Photo/Majdi Mohammed) (AP)
--

Israeli troops clashed with Arab protesters along three hostile borders on Sunday, leaving as many as 12 people dead and dozens wounded in an unprecedented wave of violence marking the anniversary of the mass displacement of Palestinians surrounding Israel's establishment in 1948.

Israel's prime minister says he will vigorously defend his country's borders after the mass infiltration.

In a televised address Sunday, Benjamin Netanyahu said he hopes calm will be quickly restored.

But he said, "Nobody should be mistaken. We are determined to defend our borders and sovereignty."

In the most serious incident, the Israeli military said thousands of protesters approached Syria's border with the Israeli-controlled Golan Heights. It said hundreds of people burst through the border, and soldiers opened fire to stop them. Dozens were wounded and six were reported killed.

As Netanyahu gathered his top advisers for an emergency meeting, officials accused Syria of fomenting the violence in an attempt to divert attention from the deadly crackdown on weeks of protests against the rule of President Bashar Assad.

"The Syrian regime is intentionally attempting to divert international attention away from the brutal crackdown of their own citizens to incite against Israel," said Lt. Col. Avital Leibovich, an Israeli military spokeswoman.

Deadly clashes also took place along Israel's nearby northern border with Lebanon, as well as in the Gaza Strip, near Israel's southern border.

The unrest came as the Palestinians marked the "nakba," or "catastrophe," the term they use to describe the uprooting they suffered at the time of Israel's founding on May 15, 1948.

On Facebook and other websites, activists had urged Palestinians and their supporters in neighboring countries to march on the border with Israel as part of nakba activities. Security officials tried to block such moves for fear of violence.

In Egypt, the army set up at least 15 checkpoints -- guarded by tanks and armored vehicles -- on the road between the Egyptian town of El-Arish and the Gaza border city of Rafah, turning back all who were not residents of the area.

In the fighting over Israel's creation, hundreds of thousands of Palestinians were uprooted, and the dispute over the fate of the refugees and their descendants, now numbering several million, remains a key issue in the Mideast conflict.

Israel captured the Golan from Syria in the 1967 Mideast war, and Syria demands the area back as part of any peace deal. Despite hostility between the two countries, the border has been quiet since the 1973 Mideast war.

Israeli TV channels broadcast scenes, taken from Arab stations, of what appeared to be thousands of people gathering along the Syrian border with the Golan, with large crowds throwing objects at the fence. Dozens of people could be seen cutting through the fence and storming across to the Israeli side.

In a statement, the military said "thousands of Syrian civilians" breached the border.

"IDF forces opened fire in order to prevent the violent rioters from illegally infiltrating Israeli territory, a number of rioters have infiltrated and are violently rioting in the village. From initial reports there are dozens of injured that are receiving medical care in a nearby hospital," the statement said.

Israeli officials confirmed two of those who crossed the Syrian border were dead on the Israeli side, and as many as four were reported dead in Syrian territory.

The protesters were believed to be Palestinians who live in refugee camps in Syria. Israel's Channel 2 TV interviewed one of those who crossed, who identified himself as a resident of the Yarmouk refugee camp in Syria. "I am Palestinian from Nazareth," a town in northern Israel, the man told the station.

Channel 2 showed footage, taken by a resident of the Golan border village of Majdal Shams, of what it said was a pro-Palestinian protest walking through the streets of the town. At late afternoon, Israeli military officials said about 100 people had been caught and were being sent back to Syria. It was not known how many remained on the loose.

"The residents are in shock, they had no idea this was going to happen," Dolan Abu Salah, mayor of Majdal Shams, told Channel 10 TV. He said the town's residents, members of the Druse Arab sect, were neutral and did not want to get involved.

About 25 miles (40 kilometers) to the west, Israeli troops clashed with a large crowd of Lebanese demonstrators who approached the border. The military said it opened fire when protesters tried to damage the border fence. Lebanese security officials reported four dead.

It was the most serious violence along the volatile border since Israel fought Lebanese Hezbollah guerrillas during a monthlong war five years ago.

The shooting erupted at the tense border village of Maroun el-Rass, which saw some of the fiercest fighting in 2006. Thousands of Palestinian refugees had traveled to the village in buses adorned with posters that said: "We are returning." Many came from the 12 crowded refugee camps in Lebanon where some 400,000 Palestinian refugees live.

"Israel may be 63 years old today but its days are numbered," said Abbas Jomaa, 50, who was carrying his 4-year-old son on his shoulders and holding a Palestinian flag. "Sooner or later we will return."

Hundreds of Lebanese soldiers, U.N. peacekeepers and riot police deployed heavily in the area, taking up positions along the electric border fence and patrolling the area in military vehicles. Young Hezbollah supporters wearing yellow hats and carrying walkie-talkies organized the entry to the village and handed out Palestinian flags.

In other violence, Palestinian medics also said two people were killed and 40 others were wounded in a demonstration in the Gaza Strip near the heavily fortified border with Israel. Demonstrations were also reported in east Jerusalem and the West Bank.

Inside Israel, police were on high alert for disturbances among the country's large Arab minority. In a reflection of the jitters, a deadly traffic incident involving an Arab truck driver in Tel Aviv set off fears that an attack had been carried out.

The truck plowed through a crowded street, crashing into a bus, several cars and pedestrians, killing one and injuring 16 others. Police said the 22-year-old driver claimed it was an accident, but said they were still investigating.

"Based on the devastation and debris, we're still examining if it was carried out deliberately," said police spokesman Micky Rosenfeld.