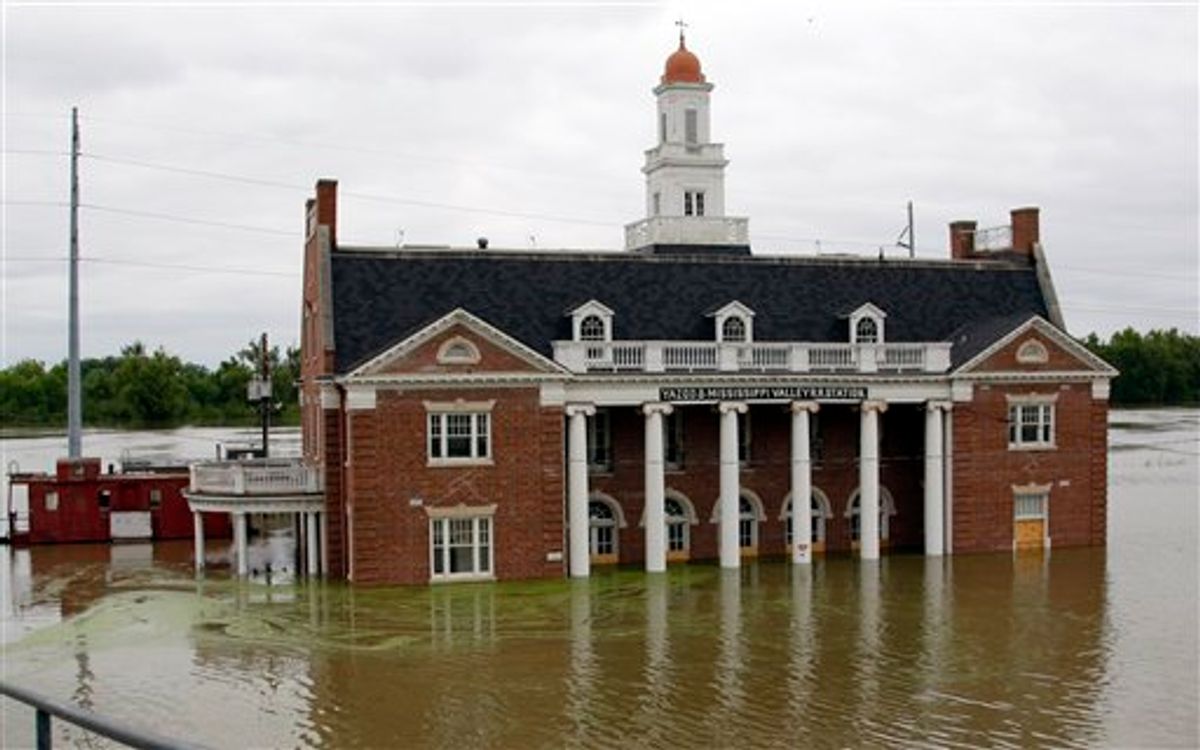 Mississippi River floodwaters continue to creep up the Old Train Depot in downtown Vicksburg, Miss., Saturday, May 14, 2011. The waters from the Mississippi River and its tributaries are not expected to crest in Vicksburg until Thursday. (AP Photo/Rogelio V. Solis) (AP)
--

Over the next few days, water spewing through a Mississippi River floodgate will crawl through the swamps of Louisiana's Cajun country, chasing people and animals to higher ground while leaving much of the land under 10 to 20 feet of brown muck.

The floodgate was opened Saturday for the first time in nearly four decades, shooting out like a waterfall, spraying 6 feet into the air. Fish jumped or were hurled through the white froth and what was dry land soon turned into a raging channel.

The water will flow 20 miles south into the Atchafalaya Basin, and from there it will roll on to Morgan City, an oil-and-seafood hub and a community of 12,000.

In the nearby community of Stephensville, rows of sandbags were piled up outside nearly every home.

Merleen Acosta, 58, waited in line for three hours to get her sandbags filled by prisoners, then returned later in the day for more bags.

Floodwaters inundated Acosta's home when the Morganza spillway was opened in 1973, driving her out for several months. The thought of losing her home again was so stressful she was getting sick.

"I was throwing up at work," she said.

The opening of the spillway diverted water from Baton Rouge and New Orleans, and the numerous oil refineries and chemical plants along the lower reaches of the Mississippi. Shifting the water away from the cities eased the strain on levees and blunts the potential for flooding in New Orleans that could have been much worse than Hurricane Katrina.

C.E. Bourg stopped by a hardware store in the shadow of the Morgan City floodwalls to buy grease for his lawnmower and paint -- items on his "honey-do list." Floodwaters came close to overtopping in 1973, but since then, they have been raised to 24 feet and aren't in danger of being overtaken.

Bourg, an attorney, said he represented a worker who was injured on the 70s-era floodwall project and learned a lot about how they were built.

"I got a copy of the plans," he said. "This one's built right, unlike the ones in New Orleans."

The Morganza spillway is part of a system of locks and levees built after the great flood of 1927, which killed hundreds and left many more without homes. When the Morganza opened, it was the first time three flood-control systems have been unlocked at the same time along the Mississippi River, a sign of just how historic the current flooding has been.

Earlier this month, the corps intentionally blew holes into a levee in Missouri to employ a similar cities-first strategy, and it also opened a spillway northwest of New Orleans about a week ago.

Snowmelt and heavy rain swelled the Mississippi, and the river has peaked at levels not seen in 70 years.

In Krotz Springs, La., one of the towns in the Atchafalaya River basin bracing for floodwaters, phones at the local police department rang nonstop as residents sought information on road closings and evacuation routes.

Like so many other residents downstream of the Morganza, Monita Reed, 56, recalled the last time it was opened in 1973.

"We could sit in our yard and hear the water," she said as workers constructed a makeshift levee of sandbags and soil-filled mesh boxes in hopes of protecting the 240 homes in her subdivision.

About 25,000 people and 11,000 structures could be affected by the oncoming water, and some people living in the threatened stretch of countryside -- an area known for fish camps and a drawling French dialect -- have already fled. Reed's family packed her furniture, clothing and pictures in a rental truck and a relative's trailer.

"I'm just going to move and store my stuff. I'm going to stay here until they tell us to leave," she said. "Hopefully, we won't see much water and then I can move back in. "

It took about 15 minutes for the one 28-foot gate to be raised in the middle of the spillway. The corps planned to open one or two more gates Sunday in a painstaking process that gives residents and animals a chance to stay dry.

Michael Grubb, whose home is located just outside the Morgan City floodwalls, hired a contractor this week to raise his house from 2 feet to 8 feet off the ground. It took a crew of 20 workers roughly 17 hours to jack up the house onto wooden blocks.

"I wanted to save this house desperately," said Grubb, 54. "This has tapped us out. This is our life savings here, but it's worth every penny."

Water from the swollen Atchafalaya River already was creeping into his backyard, but Grubb was confident his home will stay dry. He has a generator and a boat he plans to use for grocery runs. The water from the spillway was expected to reach Morgan City around Tuesday.

"This is our home. How could we leave our home?" he said.

The crest of the Mississippi was still more than a week away from the Morganza spillway, and when it arrives, officials expect it to linger. The bulge has broken river-level records that had held since the 1920s in some places. As the water rolled down the river, the corps took drastic steps to protect lives.

The corps blew up a levee in Missouri -- inundating an estimated 200 square miles of farmland and damaging or destroying about 100 homes -- to take the pressure off floodwalls protecting the town of Cairo, Ill., population 2,800.

The Morganza flooding is more controlled, however, and residents are warned by the corps each year in written letters, reminding them of the possibility of opening the spillway.

At the site of the spillway, water splashed over the gates on one side before a vertical crane hoisted the 10-ton, steel panel. Typically, the spillway is dry on both sides.

This is the second spillway to be opened in Louisiana. The corps used cranes to remove some of the Bonnet Carre's wooden barriers, sending water into the massive Lake Ponchatrain and eventually the Gulf of Mexico.

The spillways could be opened for weeks, or perhaps less time, if the river flow starts to subside.

In Vicksburg, Miss., where five neighborhoods were under water, a steady stream of onlookers posed for pictures on a river bluff overlooking a bridge that connects Louisiana and Mississippi. Some people posed for pictures next to a Civil War cannon while others carried Confederate battle flags being given away by a war re-enactor.

Larry and Paulla Dalrymple spent part of the day with a video camera, filming the river roll past a casino and swirl around the giant bridge pilings.

"Wow. It's really running,'" Paulla said. "It's amazing what the water can do -- what it's doing to people's lives."