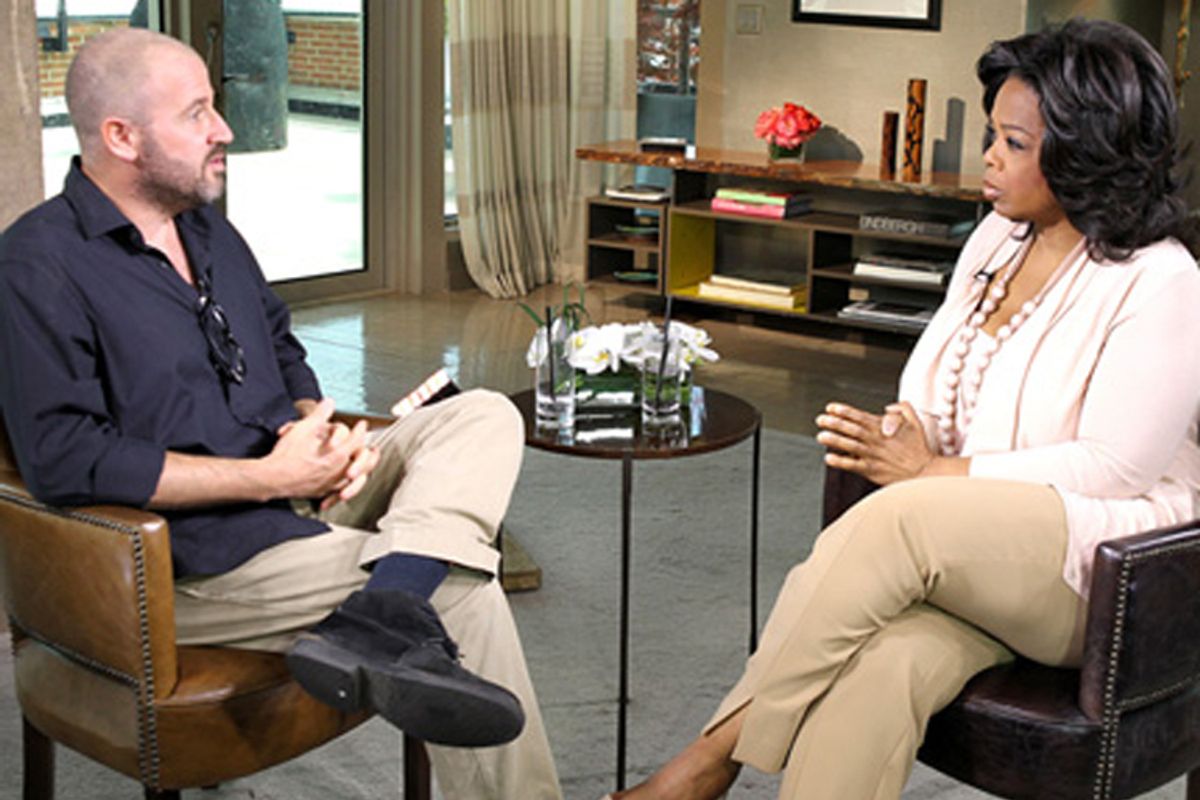 "I thought of it as a statement of defiance. I wrote it without any respect for what is fact, what is fiction." And that's how James Frey now describes the thinking that landed him in a big bucket of hot water in the first place.

In the pantheon of classic Oprah moments, there's the wagon of fat. There's Tom Cruise jumping around on the furniture like a man whose chamomile tea has not yet kicked in. There's the car giveaway, a moment that set off screams whose echoes are still circling the globe. And then there's Frey Day -- the classic 2006 confrontation between the queen of daytime and the man whose best-selling Oprah Book Club pick turned out to be more riddled with holes than SpongeBob SquarePants.

After anointing his harrowing memoir of addiction, "A Million Little Pieces," her book club selection back in 2005, the daytime queen was none too thrilled when the Smoking Gun  uncovered what it called "A Million Little Lies" in Frey's narrative, including his boasts about his criminal record. Though Frey initially brushed off the inconsistencies by saying the book reflected "the essential truth of my life," persistent nagging questions about his history and the characters in his book, including his tragic girlfriend "Lilly," kept arising. His publisher, Random House, had to hastily rebrand the work as fictionalized and Frey added an apologetic note to his readers. Worse for Frey, in January of 2006, was that he had to do the march of shame and come on "Oprah" for one of her most blistering hours ever aired.

"I think most of what they wrote was pretty accurate. Absolutely," he told her then, to which she icily replied, "OK." And when she grilled him about his drugged-out persona: "Did you cling to that image because that's how you wanted to see yourself? Or did you cling to that image because that would make a better book?" he cringed, "Probably both."  By the end of the hour, Frey had officially replaced Paris Hilton as most despised memoirist ever.

Yet two years later, it was Winfrey who was expressing contrition for her part in the fiasco, calling Frey to say, "I feel I owe you an apology." And on Monday, as part of the Most! Exciting! Finale! Month! Eveeeeeerrrrrrrr! the man who conned the Big O herself returned to face her scrutiny. In a subdued pretaped interview, free from the scorn of an audience that does not regard him as one its favorite things, Winfrey and Frey sat down to answer those lingering nagging questions, process their feelings, and let the healing begin.

It's clear that Frey, who has gone on to create terrible movies and the controversial, awful contracts-dispensing Full Fathom Five publishing house, has had his share of ups and downs over the past five years. On Monday afternoon's show, he described being pursued by the paparazzi and hit with lawsuits after his disgrace. And he affirmed one of the more fascinating aspects of the strange tale of his blockbuster pseudo memoir: that it had been originally pitched as a novel.

As Frey explained it, "I'm more influenced by artists than writers. Let's say you look at a cubist self-portrait. It doesn't look anything like Picasso. So when I was writing the book I was thinking of it like that." He went on to cite his influences -- Celine, Henry Miller, Jack Kerouac. "They tried to make art out of what they lived," he said. "They were just trying to tell a story."

For Frey to be inspired, as many writers have, by the heavily embellished storytelling of Henry Miller and Jack Kerouac makes sense. Have you ever read "The Autobiography of Mark Twain"? It's brilliant. But those authors Frey so admires were working in a very different era and within a different set of literary constraints. The memoir of today comes with an expectation of truth -- one that, by the way, anybody who's heard of Google can check up on. Even if you're David Sedaris, writing in the vein of broad humor, when you slap the word "nonfiction" on a book  there are going to be stick-in-the-muds out there who expect your work to not be fiction. As in made the hell up.

You can do fictionalized versions of your life. They're called novels and plays and every movie Woody Allen's ever made. But they're presented as fiction. Frey, instead, told Winfrey, "There came a day when a decision was made. I went out and promoted it as a memoir. "

Frey's major public shaming will serve forever as a window into the aggressive, hit-hungry world of book publishing, and the spectacular pressure on writers to sex up their tale, regardless of whether it's accurate. But when Frey told Winfrey, "I don't have a lot of respect for memoir. I think most writers of memoirs do what I do, you play around with things, you tell the best story you can," it was a flabbergastingly cheap and lazy shot.

As someone who's written a memoir, who has good friends who've written some fantastic memoirs, I think it's safe to say that memoir doesn't have a whole lot of respect for Frey either. How you tell a story is crucial; memory is maddeningly pliable and suggestible; and friends and family sometimes need the protection of concealed identities. But any writer worth a damn, any editor with a shred of integrity, would no more sell a piece of imagination as the truth than they would peddle a box of Kool-Aid as a case of Screaming Eagle. And Winfrey seemed to sense this Monday.

A woman who's spent 25 years on television being remarkably candid about her weight struggles, about her drug use, about her painful history of sexual abuse, about her family's long-hidden secrets -- and become a television legend in the process -- may not have the highest threshold for the "Nan Talese had a party and Kurt Vonnegut was there" excuse.  Though Oprah maintained a cool, polite tone with Frey throughout, even asking him if he felt she'd been fair in her original confrontation (which he described as an "ambush," though he said he "deserved it), she kept her face locked in the "Oh really?" expression throughout.  And if Frey were really so impressed with Vonnegut, he might have realized he was standing in the presence of a great man who knew how to craft a story and still show respect for the readers who were paying for it. A man who once said, in the kind of observation that seems totally lost on Frey, that "The more truth we have to work with, the richer we become."