15 people were killed in mass marches toward multiple Israeli borders 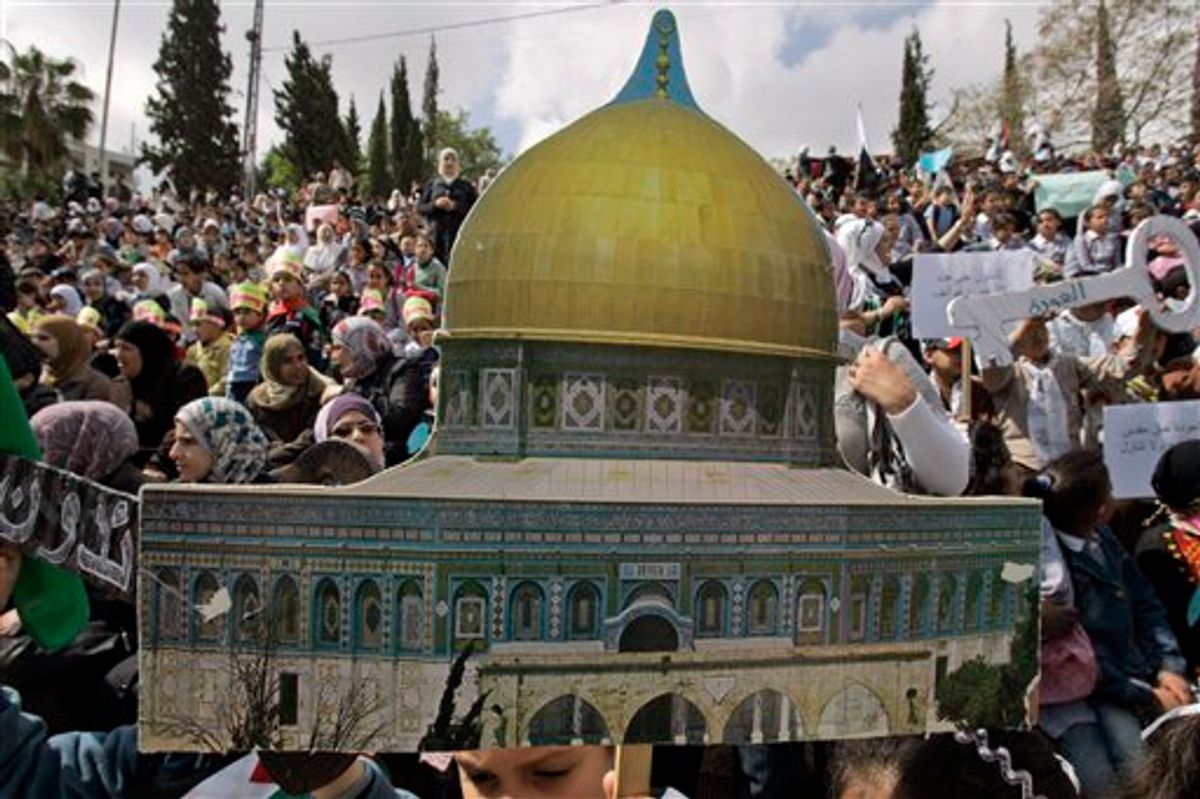 Palestinian children, one holding a Dome of the Rock cutout during a rally marking the 63rd anniversary of the Nakba, or catastrophe, the Arabic term used to describe the uprooting of hundreds of thousands of Palestinians with the 1948 creation of the state of Israel, in the West Bank City of Nablus, Sunday, May 15, 2011.(AP Photo/Nasser Ishtayeh) (AP)
--

Palestinian President Mahmoud Abbas on Monday declared three days of mourning for 15 people killed in mass marches toward multiple Israeli borders that marked a stunning new tactic in the struggle for Palestinian statehood.

Sunday's marches, on the date Palestinians mourn their uprooting as a result of Israel's 1948 creation, illustrated Arab dissatisfaction with the deadlocked efforts to establish a Palestinian state. The unprecedented tactic also reflected an Arab world emboldened by the anti-government protests sweeping the Middle East this year.

Abbas, who is pursuing alternative routes to statehood after a breakdown in peace talks with Israel, quickly embraced those who tried to breach Israel's borders from the West Bank, Gaza, Syria, Lebanon and Jordan.

"Their blood will not be spilled in vain, because their blood was spilled for the freedom and rights of our people," he said.

Flags at public buildings in the West Bank were lowered to half-staff.

Some in Israel suspected an Iranian hand in the attempted border breaches, with the help of Tehran's allies in the region: Syria, Hezbollah in Lebanon and Hamas in Gaza. Palestinian officials said the marches were a purely Palestinian initiative, organized on Facebook by activists, many living in exile.

Israel said it would file a complaint against Syria and Lebanon at the U.N. later Monday.

Early Monday, the unrest spilled over into Egypt, where riot police fired tear gas and live ammunition to disperse thousands of pro-Palestinian protesters outside the Israeli Embassy in Cairo. The protesters set fire to an Israeli flag, chanted anti-Israeli slogans and called for the expulsion of Israel's ambassador and the closure of the embassy. Twenty were arrested and 353 people were hurt in the clashes with police, Egyptian officials said.

Israeli security forces were out in large numbers in northern Israel on Monday, having been taken by surprise the day before.

Israel had been expecting Sunday's unrest to center in the West Bank, as it has in years past.

The most surprising development were the hundreds who poured across the Syrian frontier into the Israeli-held Golan Heights, captured from Syria in the 1967 Mideast war and later annexed in a move that has not been recognized internationally.

Four infiltrators were killed in the ensuing clash with Israeli security forces.

Israeli police spokesman Micky Rosenfeld said police carried out house-to-house searches in the Golan border village of Majdal Shams looking for Syrians who had burst through the fence.

Police also arrested an unarmed man from Syria who they said infiltrated into the Golan on Sunday and was trying to make his way south into Israel, Rosenfeld said.

On the nearby Lebanese border, 10 people were reported killed Sunday when protesters approached the border fence with Israel. A 15th person was killed in Gaza by Israeli sniper fire; the military said he was trying to plant a bomb.

In Lebanon, Hezbollah's leader, Sheik Hassan Nasrallah, said the protesters' message was clear: Palestinians are determined to liberate their land "regardless of the cost" and Israel will perish.

In Jordan, too, police there clashed with protesters who tried to cross into Israel on Sunday. Twenty-five people, including 11 Jordanian policemen, were wounded, police said.

The unusually violent observance of the 1948 anniversary came at a critical time for U.S. Mideast policy.

President Barack Obama's envoy to the region, George Mitchell, resigned Friday after more than two years of fruitless efforts. The U.S. president is expected to deliver a Mideast policy speech this week and to meet with Israeli Prime Minister Benjamin Netanyahu at the White House.

In the absence of peace talks, the Palestinians plan in September to seek recognition of statehood at the U.N., with or without a deal with Israel.

In an unrelated development, Israel said it transferred to the Palestinians some 350 million shekels ($100 million) in taxes it had withheld after a Palestinian unity deal opened the door for the Islamic militants of Hamas to become partners in the Palestinian government.

Israel collects tax funds and customs fees from Palestinians who work in Israel on the Palestinians' behalf. It held up the transfer this month, saying it feared money would reach militants in the Hamas-ruled Gaza Strip.

Israel had come under international pressure to release the funds.

The Palestinian unity deal is meant to end a four-year division that created rival governments in the West Bank and Gaza Strip -- areas they hope to turn into an independent state.

The rival Fatah and Hamas factions met in Cairo Monday to discuss possible nominations for positions in the new government they hope to form. The caretaker government is to remain in office until new elections next year.