Government claims it will ignore arrest warrants issued against Colonel Gadhafi, his son and his intelligence chief 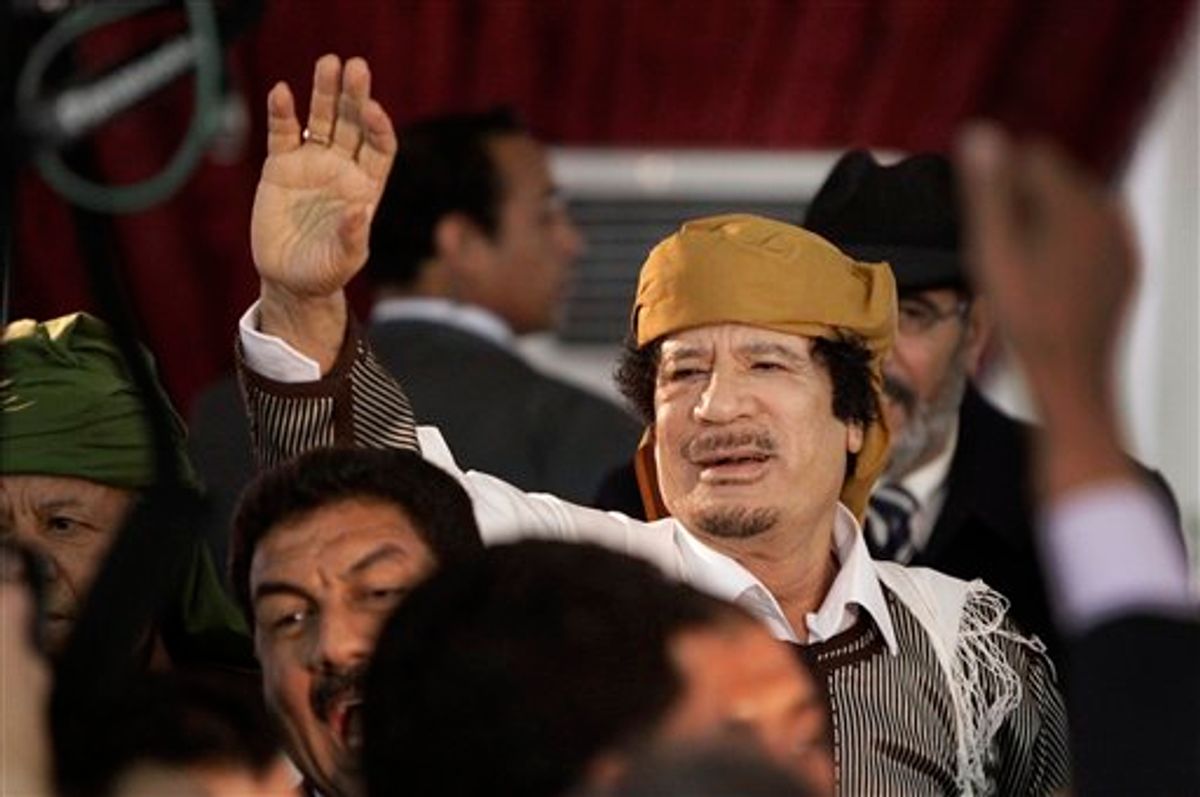 The government of Libyan leader Moammar Gadhafi is denying allegations that his regime launched illegal attacks on civilian protesters, the basis of a prosecutor's request Monday for arrest warrants at the International Criminal Court.

In response to the action by Prosecutor Luis Moreno-Ocampo, Libyan spokesman Moussa Ibrahim told reporters that the regime would pay no attention to arrest warrants that could be issued against Gadhafi, his son Seif al-Islam Gadhafi and intelligence chief Abdullah al-Sanoussi.

Ibrahim said the prosecutor relied on faulty media reports and "reached incoherent conclusions." He denied that the government ever ordered the killing of civilians or the hiring of mercenaries.

TRIPOLI, Libya (AP) -- The International Criminal Court prosecutor asked judges Monday to issue arrest warrants for Libyan leader Moammar Gadhafi and two other senior members of his regime, accusing them of committing crimes against humanity by targeting civilians in a crackdown against rebels.

The move by prosecutor Luis Moreno-Ocampo came as rebel fighters inside the Libyan city of Misrata said Monday that they had driven Gadhafi's forces from another key point on the port city's outskirts, but there were conflicting reports on whether the rebels would advance farther for fear of opening too wide a front.

Moreno-Ocampo said he was seeking warrants against Gadhafi as well as his son Seif al-Islam Gadhafi and intelligence chief Abdullah al-Sanoussi. The three, he said, ordered, planned and participated in illegal attacks.

Judges must now evaluate the evidence before deciding whether to confirm the charges and issue international arrest warrants.

"The case is now in their hands," Moreno-Ocampo told reporters at a press conference in The Hague, Netherlands.

Speaking before Moreno-Ocampo's announcement, Libya's deputy foreign minister, Khaled Kaim, said the threat of arrest warrants was not worth discussing.

He told reporters in Tripoli on Sunday that Gadhafi's regime would "not show any attention to the decision," adding that Libya did not recognize the jurisdiction of the international court. He said that most African countries also reject its rules.

Still, the arrest warrants -- if they are issued -- are seen in Libya as giving NATO more justification to target Gadhafi in its campaign of airstrikes. Although NATO spokesmen say they are not trying to assassinate Gadhafi, the nature of their strikes suggests they are trying to hit the Libyan leader.

Arrest warrants also could complicate efforts to find a haven for Gadhafi as a part of any negotiated settlement to the Libyan crisis.

Because the United Nations Security Council ordered the ICC investigation, all U.N. member states would be obliged to arrest him if he ventures into their territory.

Asked why he has not launched similar investigations into other Arab uprisings, Moreno-Ocampo said that no such action had been requested by the Security Council, as it was in the case of Libya.

The rebels applauded the prosecutor's action.

Guma el-Gamaty, a spokesman in Britain for the Benghazi-based Interim National Council -- the political wing of Libya's rebel forces -- called it "a very important step along the way to putting more pressure on Gadhafi and his son" to leave or face arrest.

British Foreign Secretary William Hague said in a statement that "the behavior of the Gadhafi regime remains of grave concern." He, along with German Foreign Minister Guido Westerwelle, said the warrants serve as a reminder that criminal acts will face international justice.

Italy's foreign minister, Franco Frattini, meanwhile, said Italy was "working with the U.N. so that a political way out is found to take the dictator and his family off the scene and allow the immediate establishment of a national reconciliation government."

In Libya, the rebel forces appeared to have expanded their hold on Misrata, the only major opposition stronghold in western Libya. Most of Libya's rebel forces are concentrated in the east.

A video posted Sunday on the Libyan rebels' Facebook page showed more than 200 SUVs and rebel vehicles at the southeastern gate of Misrata. It would give the rebels tighter control of the access points into the city.

The video showed rebels firing into the air in celebration.

Abdel Salam, a rebel militia fighter, told The Associated Press on Monday that opposition forces were able to advance on the location after NATO bombings in recent days. Reporters have had a difficult time reaching the city, and it was not possible to verify the claims independently.

Misrata has been the focus of an international aid effort to help thousands of civilians caught in the fighting. Some 1,000 people have been killed in the two-month siege of the rebel-held enclave by Gadhafi's forces.

In Benghazi, the eastern city where the rebel administration is based, the opposition's military spokesman, Col. Ahmed Bani, told the AP that rebels defeated two brigades of Gadhafi forces that were based in the city of Zlitan, just 90 miles (140 kilometers) southeast of Tripoli, in weekend battles.

"In Zlitan, the revolutionaries have forced them (Gadhafi fighters) out of their camps -- there were two big brigades -- and are on the highway, fighting them," Bani said. He said the clashes were taking place Monday 12 miles (20 kilometers) from Zlitan.

But Abdel Salam said he did not believe rebels had advanced to Zlitan, fearing they would get caught in a conflict with Gadhafi forces that they couldn't handle.

"We don't want to make the same mistake that the eastern rebels have fallen in when they were engaged in a conflict with Gadhafi army," he said.

In Misrata last week, rebels pushed Gadhafi's forces out of missile reach on the western side of the city and took the airport to the south that had been a base used for shelling.

In the Hague, Moreno-Ocampo said he had evidence of Gadhafi issuing orders, his son organizing the recruitment of mercenaries and of al-Sanoussi's direct involvement in attacks on demonstrators.

Moreno-Ocampo said that the targeting of opposition figures is continuing in areas under Gadhafi's control.

"Gadhafi's forces prepare lists with names of alleged dissidents. They are being arrested, put into prisons in Tripoli, tortured and made to disappear," he said.

"The ICC prosecutor's request acts as a warning bell to others that serious crimes will not go unpunished," said Richard Dicker, international justice director at Human Rights Watch. "It's a message to those responsible for grave abuses that they will be held to account for their actions."

"Libyan civilians who have lived through a nightmare over the past months deserve redress through an independent and impartial judicial process," Dicker said. "Today's announcement offers them that chance."

Corder reported from The Hague, Netherlands. Associated Press writers Michelle Faul in Benghazi, Libya, and Maggie Michael in Cairo contributed to this report.