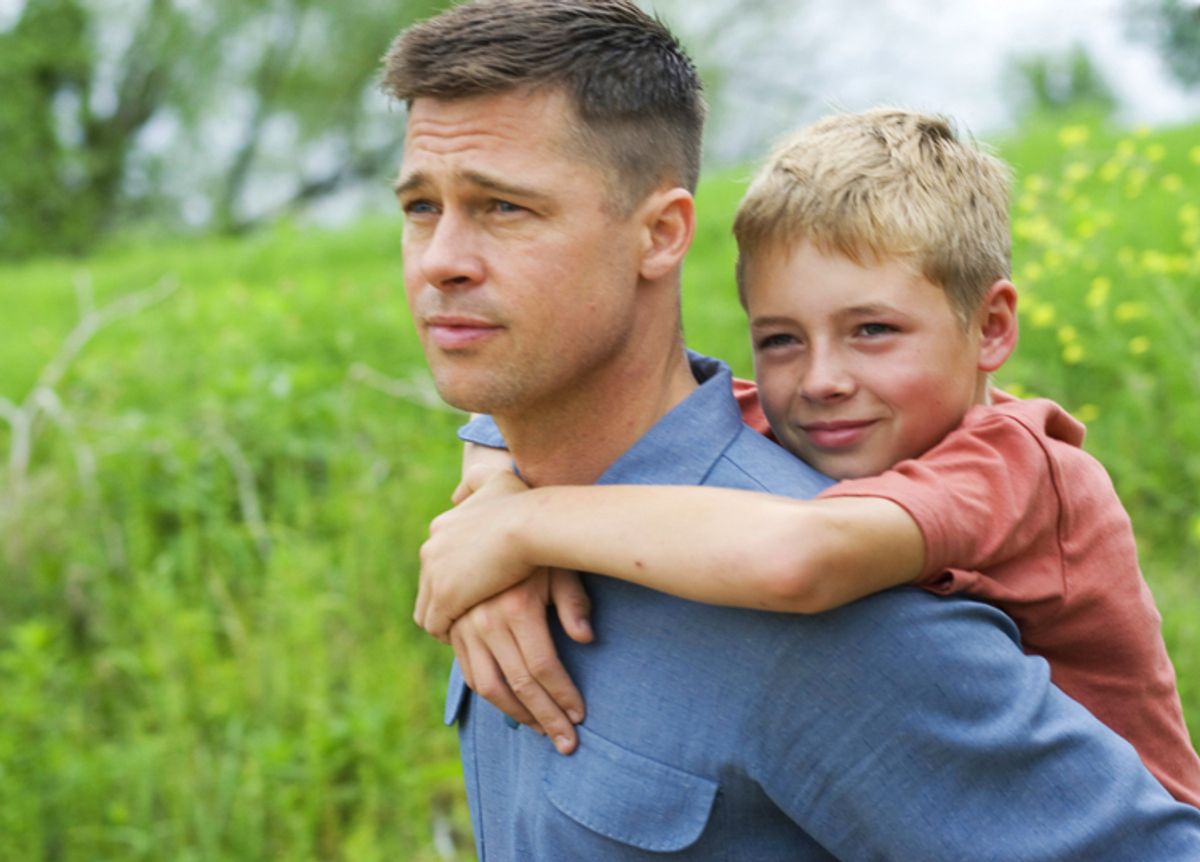 CANNES, France -- Dressed to the nines as a movie star, or perhaps as a high-end Marseille pimp -- tortoiseshell shades, slicked hair, goatee and sideburns, white linen blazer over V-neck T-shirt, loads of gold bling -- Brad Pitt was explaining to the assembled press corps why Terrence Malick was not here in person for the premiere of "The Tree of Life," his long-awaited and long-delayed new film. At first Pitt remarked that it was strange that in the film business the artists who make the work also have to sell it, but talking that way in Cannes is a self-canceling statement, so he shifted tactics. "You know when you have a favorite song?" he asked. "And you hear the band explaining what it's about, and then you're disappointed?"

That wasn't a bad way of steering us into the long period of debate and reckoning that will follow the single biggest event of the 2011 Cannes Film Festival, the unveiling of an alternately baffling and beautiful movie that Malick (the director of five films in 38 years, best known for "Badlands" and "Days of Heaven") clearly intends as a spiritual masterpiece. Monday morning's press screening was greeted by a small but lustful chorus of booing -- a venerable tradition here -- which was then drowned out by applause and sparked a series of argumentative tweets from those who had been there: Were there two haters, or 200? Was it the worst booing ever at Cannes? (Not even close.) Should booers be banned, ignored or tolerated as a bastion of French cultural independence? None of this was really worth discussing, but it points to two things: 1) "Tree of Life" was bid up way too high in pre-Cannes speculation, and was bound to disappoint many people; and 2) This movie has much to recommend it but will be a really, really tough sell, certainly for the general public and even for Malick fans.

Even by this idiosyncratic filmmaker's standards "The Tree of Life" tells nothing close to a conventional story, and during the dense barrage of images and sounds that fill the first half-hour or so you may wonder whether it has a story at all. Malick might respond to that question with a question of his own; he was once a doctoral candidate in philosophy at Oxford, after all. Does the Bible tell a story? Do the Upanishads? Does the 13 billion-year history of creation -- large or small C, as you prefer -- tell a story? Because those are relevant touchstones or reference points for "The Tree of Life," a massively ambitious work of allegorical and almost experimental cinema that seeks to recapture the lived experience of a 1950s family, after the fashion of a Texas Proust, and connect it to the life of the universe, the nature and/or existence of God, the evolution of life on earth and even the microscopic chemistry and biology of life.

Yes, there are dinosaurs, as you know if you've seen the movie's already-famous trailer. (They look borrowed from the "Prehistoric Planet" series my kids watch, and unfortunately have even more of that weightless CGI feeling.) There are Hubble Space Telescope images of distant galaxy clusters, animated sequences of asteroids crashing into the infant Earth and chromosomes wiggling themselves into the double helix, undersea photography of marine life, images of human childbirth. There are discussions about Satan and evil, a sermon on the injustice and ubiquity of suffering taken from the Book of Job -- a key text for this film and indeed for the entire Western religious-philosophical tradition -- and portentous voice-over narration, apparently directed at the Abrahamic God or the universe or an absent loved one. ("In what shape did you come to us? What disguise? What are we to you?")

One of the many reasons to admire Malick is that he is far less reliant than other major directors on other people's movies. I mean, I'm sure he's seen plenty of them, but he never seems obsessed with quoting obscure genre films or sequences out of Eisenstein or Michael Powell, or making work aimed at fellow directors and their legions of fans and followers. So the fact that "The Tree of Life" clearly has a relationship to Stanley Kubrick's "2001: A Space Odyssey" feels both deliberate and carefully considered. You could almost call it a remake or a reverse-engineered version of Kubrick's massive head-trip, one in which humanity begins in space and then returns to Earth. I'd put it this way: If the cosmic astronaut God-baby from the end of "2001" came back to earth and made a movie, this would be it. (And we wouldn't understand what it was trying to tell us, either.)

If it sounds like I'm saying that "The Tree of Life" is a puzzler, that it blends uncanny clarity and extraordinary powers of perception with what sometimes seems like murky, pretentious chaos and that it's suffused with a spiritual and even religious sensibility that will provoke an allergic response in quite a few viewers, you're on the right track. But let's get more specific: Yes, there are movie stars in this picture. Brad Pitt plays Mr. O'Brien, the hardass father of the mid-century family (call him "Dad" at your peril), which gives him a chance to sport a neat barbershop haircut and a tightly tailored period wardrobe. (I don't think a first name is ever indicated.) Sean Penn plays his adult son, Jack, many years later, when he's an architect or a real estate guy or something in New York, but it's more like the idea of Sean Penn than the real thing. He appears in only a few brief scenes and hardly says anything. Indeed, there's not much dialogue in "The Tree of Life," hardly any conversations that last more than a few seconds and absolutely none of the extended dramatic scenes associated with the psychological-realist tradition.

That said, Malick's fragmentary approach to reconstructing the life of the O'Brien family, mostly as perceived by 10- or 11-year-old Jack (jug-eared Hunter McCracken, who really does look like Sean Penn), has a remarkable resonance, at least for viewers patient enough to allow the movie to work its spell. Emmanuel Lubezki's camera races alongside Jack and his younger brother through the flat, tree-shaded landscape of their middle-class Waco neighborhood, where they play Kick the Can and Three Flies Up, dance behind a DDT truck as it spreads great, opaque clouds of poison, join and then reject the casual, anarchic violence that comes with a mob of preteen boys. (I get the feeling Malick is really, really sorry about that frog he sent into orbit way back when.) They witness a boy drowning in a local swimming pool, which echoes what we already know: That one member of this family will die young, although not yet, and that the echoes of that trauma are calling forth these memories.

Jack's father is a loved and feared figure in the classic 20th-century mode, demanding, abrasive, violent and affectionate, a serious devotee of classical music and the Roman Catholic Church (unusual attachments in '50s Waco, I would think). It's a powerful, physical performance and one of Pitt's best, even though this really isn't his movie. As played by the gorgeous, delicate redhead Jessica Chastain, the boys' mother is also an archetypal figure, perceived by them almost as an angel or a martyred saint -- we once see her, mysteriously, floating in the air for a few seconds -- but also a real woman, playful and nurturing, not just teaching her boys to love the natural world around them but personally embodying it. In the now-famous dichotomy between "the way of nature" and "the way of grace" presented in the film's trailer, my reading is that Mrs. O'Brien says she stands for the latter but is really aligned with the former (or that she represents a fusion of the two).

As compelling as Malick's portrait of the sometimes idyllic, sometimes feral boyhood of the O'Brien brothers is, it's bracketed by much more mysterious material, and that's what much of the debates around "Tree of Life" will concern. In the first couple of hours after Monday's press screening, I've heard some people I respect say that they love the Waco scenes with Pitt, Chastain and the boys and found the spiritual-experimental elements of the film off-putting, and others say precisely the opposite. On first viewing I'm inclined to the former view, and I think it's desperately difficult to pull off the mystical-contemplative mode and the realistic mode in the same movie, at least if you're not named Ingmar Bergman or Andrei Tarkovsky. On the other hand, Terrence Malick doesn't punch too far below that weight, and any work this dense and complicated, this imbued with cinematic craft and visual poetry and religious philosophy, deserves more reflection and consideration than it's likely to get at Cannes, where the press often reacts to unconventional or unfamiliar work like a mass of T-cells attacking an invading virus.

Actually, the questions Malick is pursuing in "The Tree of Life" are simple, even purposefully naive ones that have plagued human beings since the beginning of time. It's his method of asking and answering them that is both highly aestheticized and likely to provoke controversy. (I won't discuss the end of the film, but implausible as this may sound, "The Tree of Life" may appeal to more adventurous Christian viewers.) They range from "the microscopic story of a family in a small town in Texas" to "the macroscopic story of the birth of the cosmos," as Brad Pitt put it at the press conference. (The legendarily reclusive Malick did not show up, of course. The film's actors and producers were asked to speak on his behalf and sidestepped it the best they could.)

We are here, living and dying on this little blue rock in the middle of space, mesmerized by the mysterious relationships between parents and children that defines our lives, connected at every point -- a tree we plant, an animal we feed, the earth we dig in, the thoughts we think -- to something much larger we can't really understand. Trying to get at some of that in a 2011 movie-star vehicle that cost many millions of dollars to make, and is partly an autobiographical family story and partly an indecipherable spiritual allegory -- well, that's nuts. Right now I suspect that "The Tree of Life" is pretty much nuts overall, a manic hybrid folly with flashes of brilliance. But even if that's true it's a noble crazy, a miraculous William Butler Yeats kind of crazy, alive with passion for art and the world, for all that is lost and not lost and still to come.

"The Tree of Life" opens May 27 in New York and Los Angeles, with national release to follow.