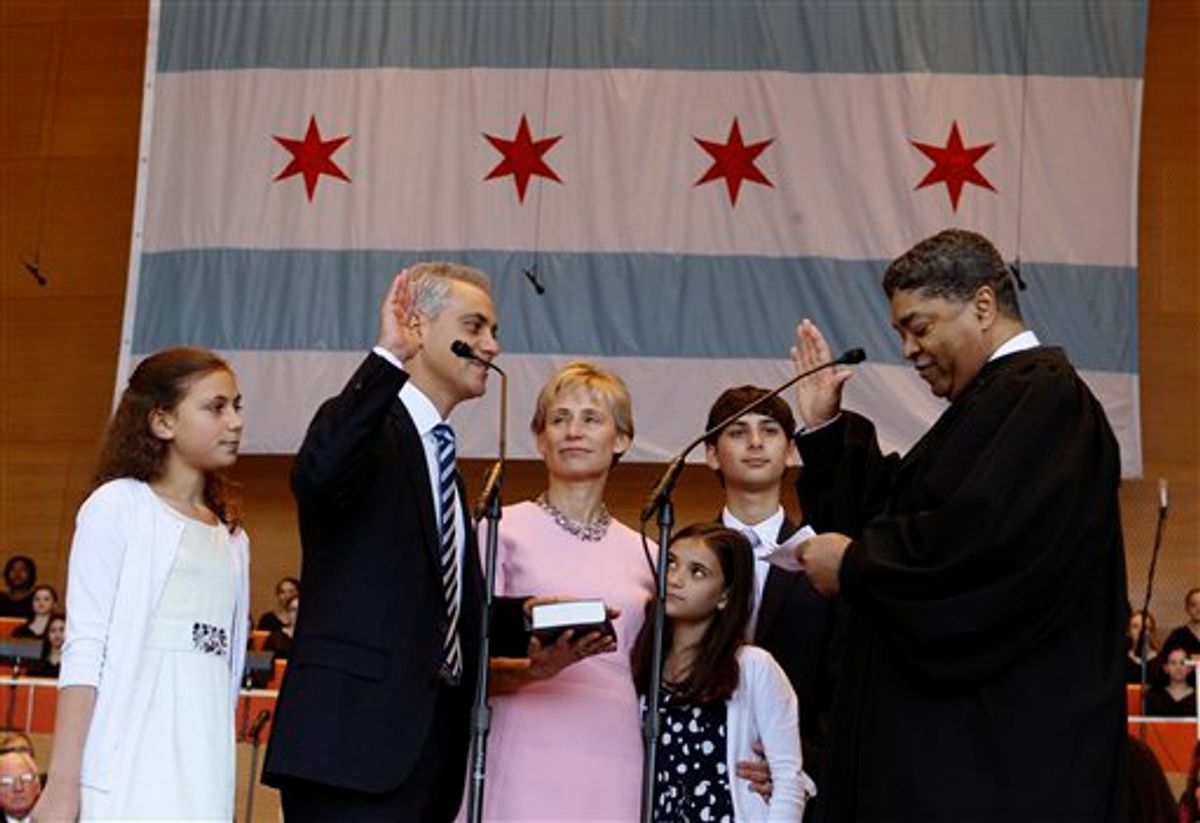 Rahm Emanuel was sworn in Monday as Chicago's first new mayor in two decades, a historic power shift for a city where the retiring Richard M. Daley was the only leader a whole generation had ever known.

The former White House chief of staff took the oath of office at downtown's Millennium Park, one of the signature accomplishments in Daley's efforts to transform Chicago from an industrial hub into a gleaming global tourist destination. He planned to head to City Hall later to the fifth-floor office that was Daley's lair for 22 years.

"We must face the truth," Emanuel said in his inaugural speech. "It is time to take on the challenges that threaten the very future of our city: the quality of our schools, the safety of our streets, the cost and effectiveness of city government, and the urgent need to create the jobs of the future."

Emanuel inherits a city with big financial problems. His transition team predicted a $700 million budget shortfall next year, but because of some controversial decisions by Daley -- most notably the push to privatize parking meters -- he has limited ways to pay for school improvements or repair the city's aging infrastructure.

In his speech, Emanuel walked a fine between bluntly assessing the city's problems without being directly critical of the departing mayor.

"From the moment I began my campaign for mayor, I have been clear about the hard truths and the tough choices we face. We simply can't afford the size of city government that we had in the past, and taxpayers deserve a more effective and efficient government than the one we have today."

Emanuel also showed that he would not be shy about wading into national politics, referring to efforts in other Midwestern states to eliminate union rights for many public employees as part of budget cuts.

"I reject how leaders in Wisconsin and Ohio are exploiting their fiscal crisis to achieve a political goal. That course is not the right course for Chicago's future," he said.

Emanuel, who represented Chicago in Congress before he went to Washington to become Obama's senior aide, made his mayoral ambitions known more than a year ago during an interview on Charlie Rose's PBS talk show, saying it was "no secret" that he wanted to run for mayor if Daley did not seek re-election.

When Daley announced last fall that he would not seek a seventh term after 22 years in office -- a longer tenure than any other mayor in the city's history -- some wondered if Emanuel had some prior knowledge when he made that comment.

But if he did, that didn't stop him -- just days before Daley's stunning announcement -- from renewing his lease with the tenant who rented his Chicago home while the Emanuels lived in Washington.

That decision to rent his house was at the center of the biggest obstacle standing between Emanuel and the mayor's office: the legal battle over whether he was a resident of Chicago and eligible to run for mayor.

The fight ended with an Illinois Supreme Court ruling in his favor -- but not before an appellate court panel knocked his name off the ballot, citing his time away from the city.

Once that issue was out of the way, Emanuel simply steamrolled over his opponents.

Branded as a Washington outsider by other candidates, Emanuel didn't miss an opportunity to remind voters that, unlike his opponents, he had friends in high places, even as he sought to convince Chicagoans that he was one of them.

Armed with a $14 million campaign war chest that dwarfed those of his opponents, the only question in the last weeks of the race was whether Emanuel would get enough votes to avoid a runoff.

Emanuel, who kept his temper and his famously profane vocabulary in check during the campaign, ended up collecting 55 percent of the vote. In his last election campaigns, Daley was accustomed to collecting more than 70 percent.

Emanuel seemed to allude to his reputation when he spoke about school reform.

"As some have noted, including my wife, I am not a patient man," he said. "When it comes to improving our schools, I will not be a patient mayor."

Once elected, Emanuel wasted little time putting his administration together, bringing with him a number of people from his days in Washington.

For key posts, he went far outside the city. He hired the schools chief in Rochester, N.Y., to run the city's massive education system. He went to Newark, N.J., to find his police superintendent rather than promoting from within. And where Daley hired a local newspaper reporter as his press secretary, Emanuel hired his away from the U.S. Department of Agriculture in Washington.

In his speech, Emanuel thanked Daley for his service to the city, noting how the "world class" park where he was speaking had once been an abandoned rail yard and "nagging urban eyesore."

"A generation ago, people were writing Chicago off as a dying city," the new mayor said. "They said our downtown was failing, our neighborhoods were unlivable, our schools were the worst in the nation, and our politics had become so divisive we were referred to as Beirut on the Lake."

When Daley took office in 1989, "he challenged all of us to lower our voices and raise our sights. Chicago is a different city today than the one Mayor Daley inherited, thanks to all he did."

In a mark of Emanuel's continuing ties with Washington, Vice President Joe Biden attended the inauguration, as did William Daley, Secretary of the Treasury Timothy Geitner and two other cabinet secretaries.