Beyond the debt ceiling barrier

Technically speaking, the U.S. government is now over its spending limit. So why doesn't anyone care? 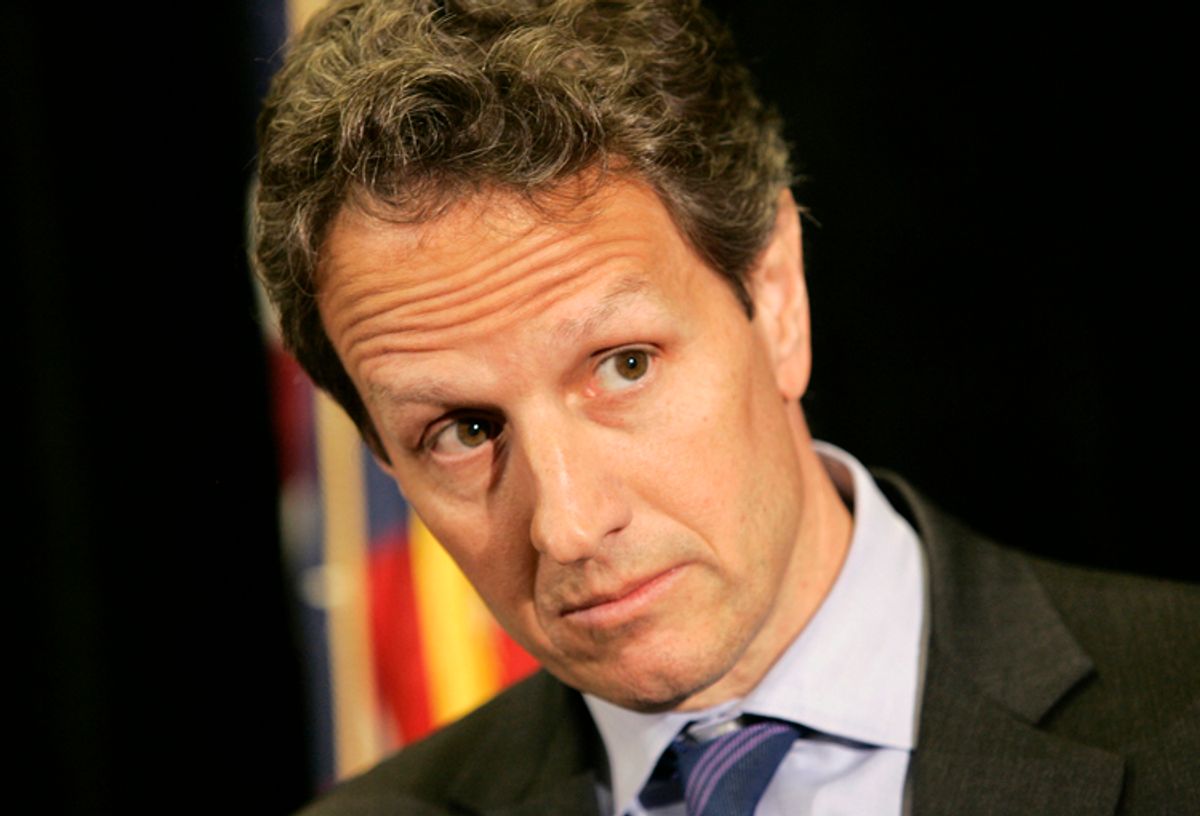 On Monday, the U.S. government technically breached the debt ceiling, breaking through the $14.2 trillion barrier. On Tuesday, economic chaos somehow failed to materialize. The bond market evinced utter calm, even boredom, at the news (in fact, the yield on a 10-year Treasury bond fell to its lowest mark since last December, which is the very definition of abject complacency). Members of the U.S. Congress, currently on recess, could hardly wrangle up the energy to deliver the same old tired boilerplate.

In large part the lack of reaction has to do with the fact that everyone concerned already knew that the technical breach of the ceiling would be a non-event. Secretary of the Treasury Tim Geithner has been explaining for months that the government was prepared to avail itself of a familiar set of accounting tricks to postpone the date when the government could no longer pay its bills outright. Monday's real news was Geithner's letter informing Congress that -- as of May 16 -- the Treasury had stopped investing in a couple of government employee retirement funds -- a legally authorized move to gain some breathing space that has been made several times before in previous debt ceiling squabbles.

According to Geithner, the real drop dead date for the debt ceiling is still 11 weeks away, on Aug. 2.

Which leads us to part two of the debt ceiling charade. Eleven weeks is an eternity in political terms. Unless bond investors start to get worried, there will be no real pressure to move beyond rhetoric and into real deal-making for at least a couple of months. There's going to be a lot of political bluster between now and then, but we can safely ignore almost all of it. The debt ceiling will get raised -- the only meaningful question, as I've written many times before, is what kind of deal gets cut that will cobble up enough votes to pass it in both the Senate and the House.

The emerging consensus appears to be that we are not going to see some grand bargain that mixes in revenue increases with big changes to entitlements. But it's impossible to imagine Republicans voting for a debt increase without some meaningful moves to cut government spending, possibly in the short term. How ugly the horse-trading gets depends on how long the bond market stays calm and how willing Obama is to play chicken with John Boehner. Polls suggest that the general public is opposed to raising the debt ceiling, which gives Republicans leverage. But any economic disruption that resulted from a protracted battle over the debt ceiling -- or an outright failure to raise it -- would inevitably be blamed on Republicans. The GOP has a lot to lose.

There's your basic story line. I don't expect it to change much until we get into the heat of the summer.