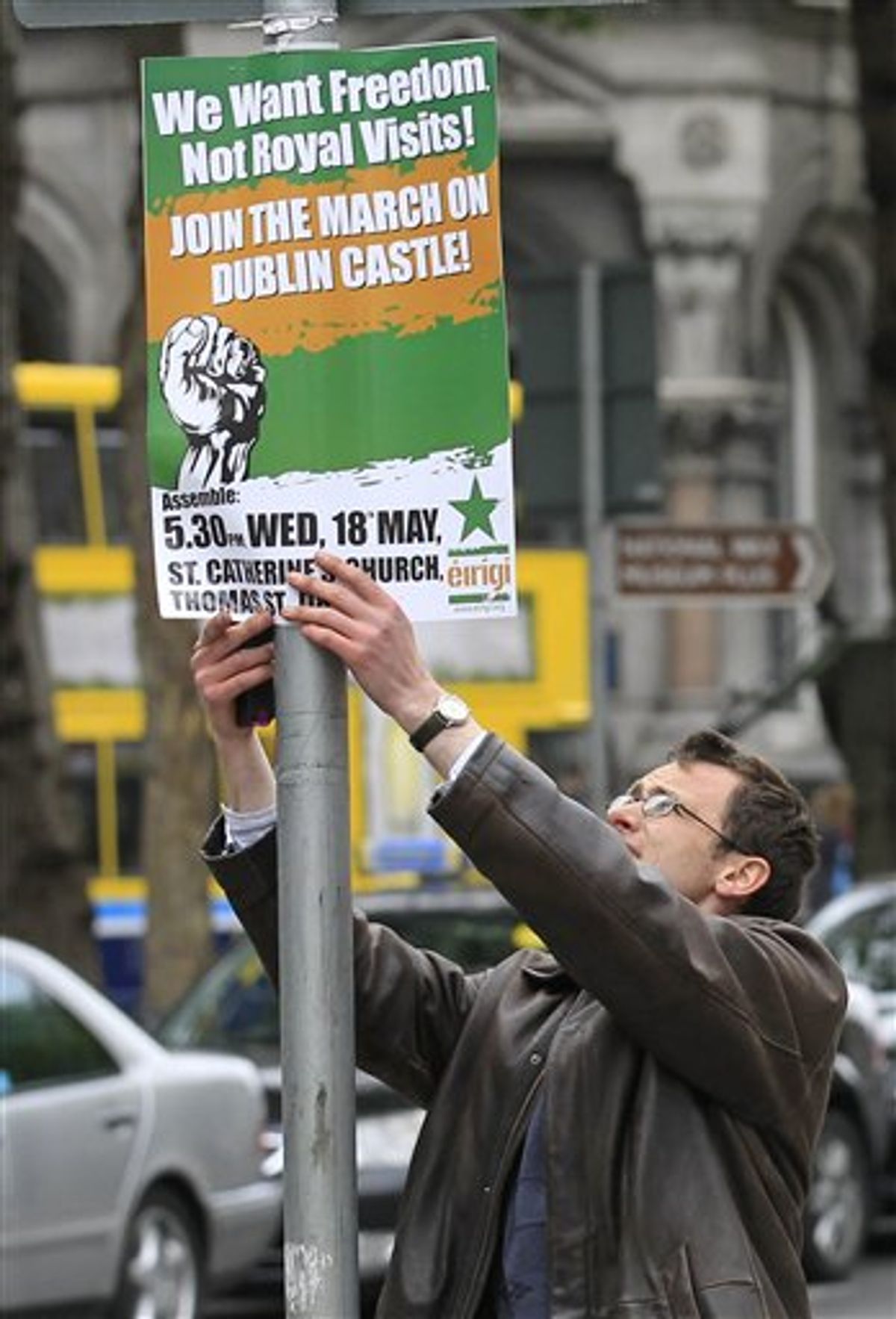 Authorities defused a bomb Tuesday hours before Queen Elizabeth II was to begin the first visit by a British monarch to the south of Ireland in a century, a trip designed to celebrate the healing of ancient wounds and the triumph of peacemaking in neighboring Northern Ireland.

Police said they found a small, viable bomb hidden in the luggage compartment of a bus in Maynooth, a university town 15 miles (25 kilometers) west of Dublin, early Tuesday. A second hoax device was discovered near Dublin's light-rail line in the western district of Inchicore. Irish Army experts dismantled the bomb, while detectives took away the fake bomb to check for fingerprint or DNA traces of the hoaxer.

No group claimed responsibility for either threat. But several small IRA splinter groups concentrated along the Irish border continue to plot gun and bomb attacks in the British territory of Northern Ireland next door in hopes of undermining the success of its 1998 peace accord, particularly its stable Catholic-Protestant government.

Irish and British officials were keen to stress that the queen's four-day visit to Dublin, Kildare, Tipperary and Cork would proceed as planned -- accompanied by the biggest security operation in the Republic of Ireland's history.

"This is the start of an entirely new beginning for Ireland and Britain," said Irish Prime Minister Enda Kenny. "I really do hope that the welcome she gets will be genuine and memorable for her and her party."

More than 8,000 police, two-thirds of the entire country's police force, have already shut down key roads in central Dublin and erected pedestrian barricades for several miles (kilometers). About 1,000 Irish troops are on standby in reserve.

Ireland has borrowed a specially bomb-resistant, bulletproof Range Rover from Northern Irish authorities for the queen to use during her trip. They also received two massive mobile water cannons from the Northern Ireland police to use against any rioters.

For those opposed to the visit, police are making it extremely difficult even to protest within sight of any of the queen's engagements. Onlookers are being given few vantage points to see the queen unless they have been included in carefully vetted guest lists. Roads surrounding events are being closed even to pedestrians.

But Irish leaders said extreme security measures were necessary to ensure the success of an event that has been 15 years in the making.

"I think it is an extraordinary moment in Irish history," said Irish President Mary McAleese, who was hosting the queen's first event Tuesday at her official residence in Dublin's vast Phoenix Park.

McAleese, who will host many of the events set up for the queen and her husband Prince Philip, said Britain and Ireland were both "determined to make the future a much, much better place."

The queen arrives a full century after her grandfather George V visited an Ireland that was still part of the British Empire. Relations between Ireland and its former colonial master have been tense most of that time.

The two countries spent decades in frosty opposition following Ireland's guerrilla war of independence from Britain and the creation in 1922 of the Irish Free State.

Ireland stayed neutral in World War II and offered condolences to Germany over Adolf Hitler's death; broke all symbolic ties with Britain by declaring itself a republic in 1949; and offered sympathy and safe haven when the modern Irish Republican Army in 1970 began shooting and bombing in the British territory of Northern Ireland.

But after Britain and Ireland joined the European Union in 1973, and as the bloodshed in Northern Ireland spilled over into the Catholic south, the governments in London and Dublin gradually found common cause.

Their cooperation provided the essential bedrock for the 1998 Good Friday peace accord. IRA disarmament and a stable Catholic-Protestant government in Belfast eventually followed.

British Prime Minister David Cameron, who will arrive Wednesday in Dublin, said the success of Northern Ireland peacemaking was allowing "the natural friendship, comradeship, shared experiences and warmth that we have for each other (to) really come out." He said the queen's tour of Ireland would "be a huge step forward for that process."

While the Irish remain proud of their independence, many concede that they share much popular culture with their nearest neighbor. Today's Ireland is home to 4.5 million residents who watch British television and newspapers daily, and shop in the British chain stores that dominate the commercial hearts of every Irish city.

Many follow English and Scottish soccer with passion, traveling in their tens of thousands each weekend by plane and ferry. The English, in turn, have made the Emerald Isle a favored tourist destination.

Cameron's government offered a particularly low-interest loan, declared that Ireland's revival was a strategic British interest, and has pressed other EU members to cut the Irish more slack for managing their staggering debts.

These cultural and economic ties have created what is expected to be a generally warm atmosphere for the queen despite the threat of violence from the IRA splinter groups.

Police in both parts of Ireland say they are keeping dissident operatives under close surveillance. Several have been arrested in the days leading up to the visit.