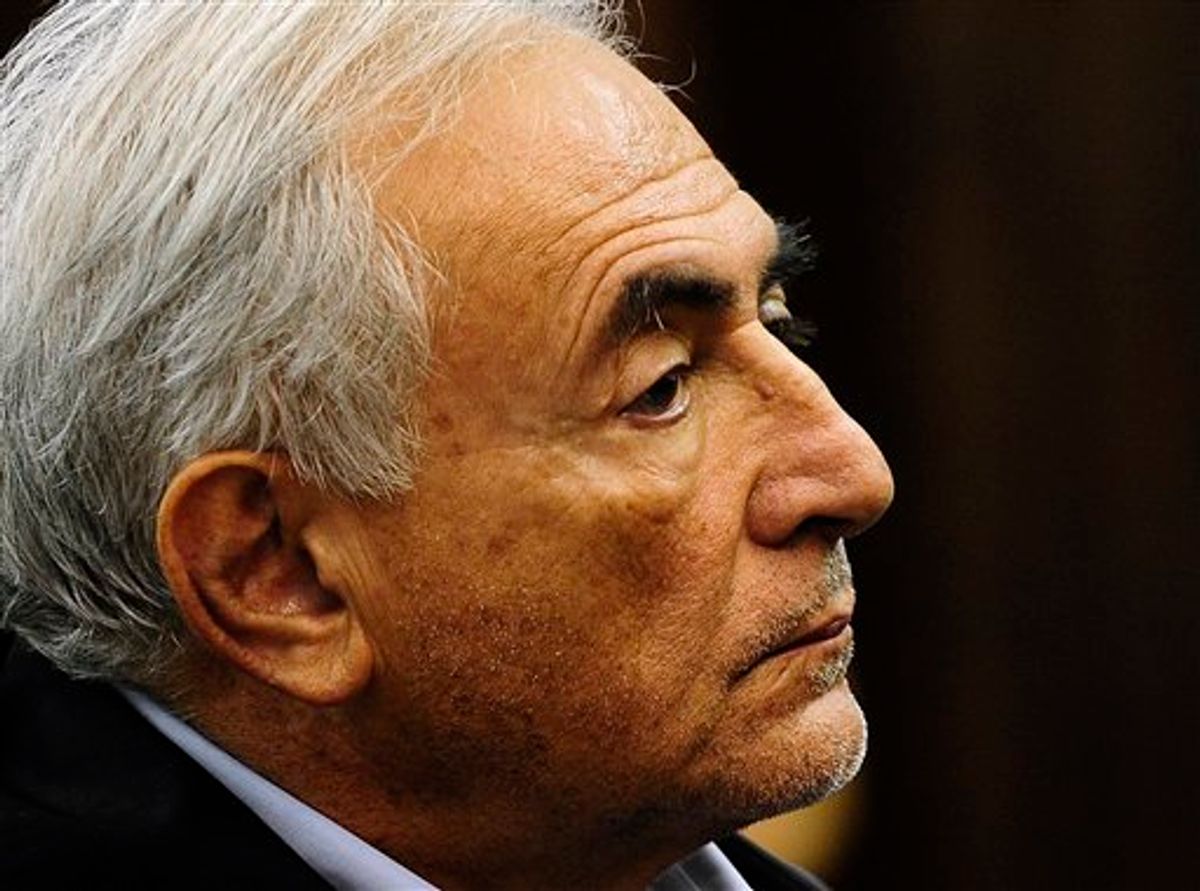 Dominique Strauss-Kahn, head of the International Monetary Fund, is arraigned Monday, May 16, 2011, at Manhattan Criminal Court in New York, on charges he sexually assaulted a hotel maid on Saturday. Strauss-Kahn must remain jailed at least until his next court hearing for attempted rape and other charges, a judge said Monday. (AP Photo/Emmanuel Dunand, Pool) (AP)
--

An employee who had a brief affair with IMF chief Dominique Strauss-Kahn warned the organization about his behavior toward women in a letter sent three years ago, a person close to her said Tuesday.

Hungarian-born economist Piroska Nagy voiced "doubts about Dominique Strauss-Kahn's suitability for running an international institution," according to the person, who was familiar with the letter's content but declined to be identified, citing the sensitivity of the matter.

Nagy, who had worked at the IMF for decades, left the organization after the affair with Strauss-Kahn in 2008. Although the relationship has long been public knowledge, and an IMF-commissioned investigation into the case cleared Strauss-Kahn of wrongdoing, it is back in the news after the 62-year-old Frenchman's incarceration on sex crimes charges in New York.

The New York Times published an excerpt of the letter, along with an account that alleged Nagy had been aggressively pursued by her boss, who sent her sexually explicit messages and at one point even had her summoned from the bathroom to speak to him.

Nagy did not return an email Tuesday seeking comment on the report, but the person close to her said it was accurate. Nagy now works with the European Bank for Reconstruction and Development in London.

The person added that Nagy's lawyers had recently written another letter, this time to Strauss-Kahn's lawyers, warning them against trying to suggest that she was the one who initiated the affair.

"He was the one who chased her," the person said.

Strauss-Kahn's behavior toward women has come under scrutiny since he was arrested Sunday on charges of attempted rape stemming from a maid's accusation that he assaulted her at a New York hotel over the weekend. Strauss-Kahn's attorney, Benjamin Brafman, said his client was innocent.

Strauss-Kahn is a self-acknowledged womanizer, but some say he's guilty of something far more serious: A pattern of sexual assaults dating to at least 2002.

On Monday, the lawyer for a 31-year-old French novelist, Tristane Banon, said she was likely to file a criminal complaint in coming days accusing Strauss-Kahn of sexually assaulting her nine years ago.

Nagy's letter suggests that allegations that Strauss-Kahn had a problematic relationship with women had been known for years.

And even though the 2008 investigation into the pair's liaison didn't find Strauss-Kahn culpable, it did criticize his judgment. The IMF board found that the relationship was consensual, but called his actions "regrettable" and said they "reflected a serious error of judgment."

Strauss-Kahn issued an apology, writing in an email to IMF staff that he showed poor judgment but didn't abuse his position.