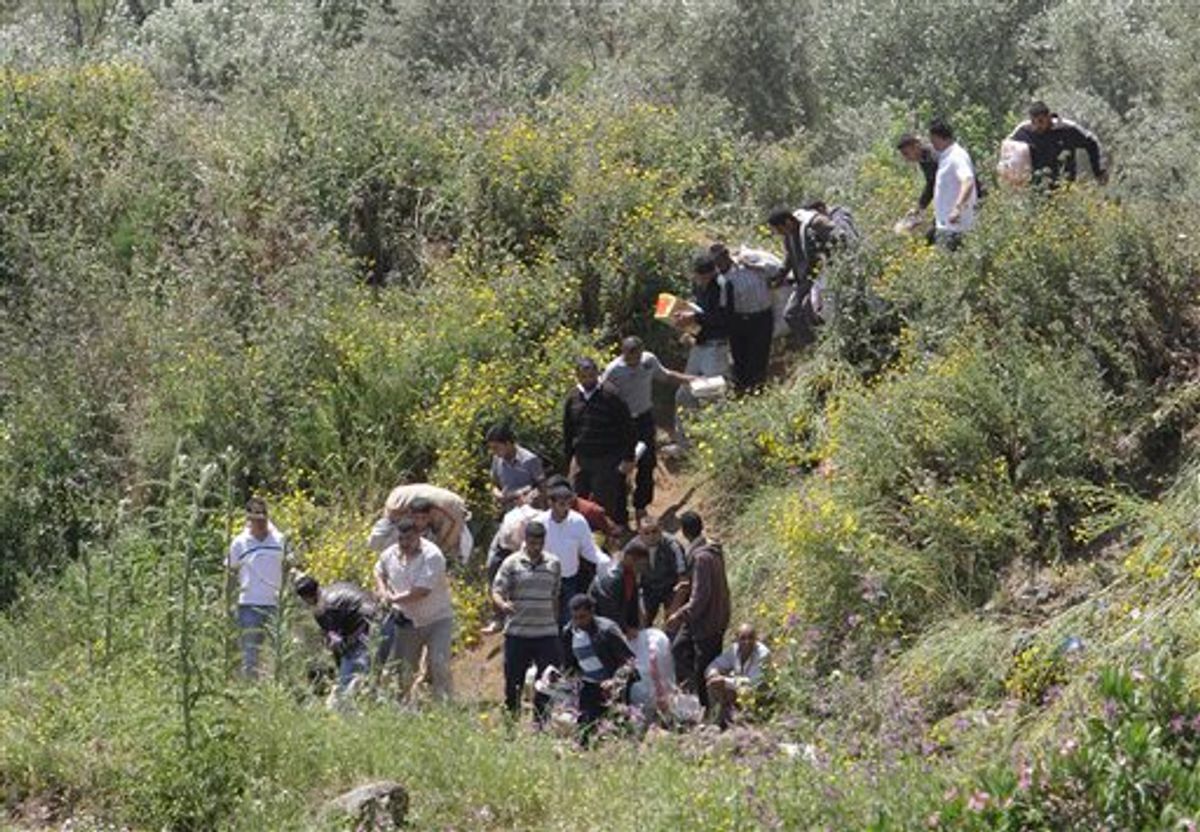 Syrian citizens carry their belongings, as they cross the border illegally , fleeing from violence the western Syrian village of Talkalakh, in the Wadi Khaled area, about one kilometer (0.6 miles) from the Lebanon-Syria border, north Lebanon, Monday May 16, 2011. Carrying mattresses and bags of clothing, Syrians fleeing their homeland described a "catastrophic" scene Monday in a besieged border town that has been largely sealed off as the army tries to crush a two-month uprising. (AP Photo/Bilal Hussein) (AP)
--

Syrian government agents chased students who were protesting against President Bashar Assad's regime at a northern campus Tuesday, beating them with batons and injuring dozens, a human rights activist said.

Mustafa Osso said the agents tried to break up a protest of about 2,000 students at the campus in Aleppo, Syria's largest city. He said many of the students were chased into their dormitories and badly beaten.

The university has seen several anti-regime demonstrations in the past weeks.

Also Tuesday, Syrian activists used Facebook to call for a general strike throughout Syria on Wednesday to protest the crackdown. One of the protesters' main Facebook pages, The Syrian Revolution 2011, had a picture of a child saying "father, your participation in the strike is a guarantee for my future."

Osso said security forces with clubs also dispersed a rally Monday of about 3,000 in the central city of Homs.

Syria's top rights organization has said that Assad's crackdown has killed more than 850 people nationwide since the turmoil engulfed the country in mid-March.

Assad's regime has used brutal military force to crush the unprecedented revolt, the most serious threat to his family's 40-year dynasty.

"There were no reports of shooting or tear gas being used," Osso said, apparently an attempt by authorities to avoid deaths among civilians.

Osso, head of the Kurdish Organization for the Defense of Human Rights and Public Freedoms in Syria, said there was little news from the western town of Talkalakh, which has been under siege by security forces since Thursday. He said residents of nearby areas were still hearing cracks of gunfire but it is not clear whether there were injuries.

At least 16 people -- eight of them members of the same family -- have been killed in recent days in Talkalakh, a town of about 70,000 residents, witnesses and activists say.

Talkalakh residents who fled the city to neighboring Lebanon over the past few days told The Associated Press about horrific scenes back home that include sectarian killings, gunmen carrying out execution-style slayings and the stench of decomposing bodies in the streets.

On Tuesday, scores of Syrians crossed into Lebanon and security officials said at least 170 people entered the country in the early hours of the day. They added that a 2-year-old girl who suffered a shrapnel wound in her chest was undergoing treatment in a Lebanese hospital.

On Monday, the National Organization for Human Rights said in a statement that at least 34 people were killed in the past five days in the villages of Inkhil and Jassem near the southern city of Daraa. Ammar Qurabi, the head of the human rights organization, said five bodies were discovered in Daraa on Monday, raising the overall death toll to 850.

There were also unconfirmed reports that up to 20 bodies were found in a grave there. Calls to Daraa on Monday seeking to verify the reports did not go through.

A Syrian Interior Ministry official dismissed reports about a mass grave in Daraa as "completely baseless." The unnamed official, quoted by state-run news agency SANA, said Tuesday that the "allegations came in the context of the campaign of provocation, slander and fabrication" against Syria.

The official said an "armed terrorist group" opened fire on a police vehicle in al-Bayadhah region in the central province of Homs, killing two policemen and wounding four others, including an army officer.

Assad has blamed the unrest on armed thugs and foreign agitators. He also has played on fears of sectarian strife to persuade people not to demonstrate, saying chaos will result.