The most epically disastrous presidential campaign rollout in history continues 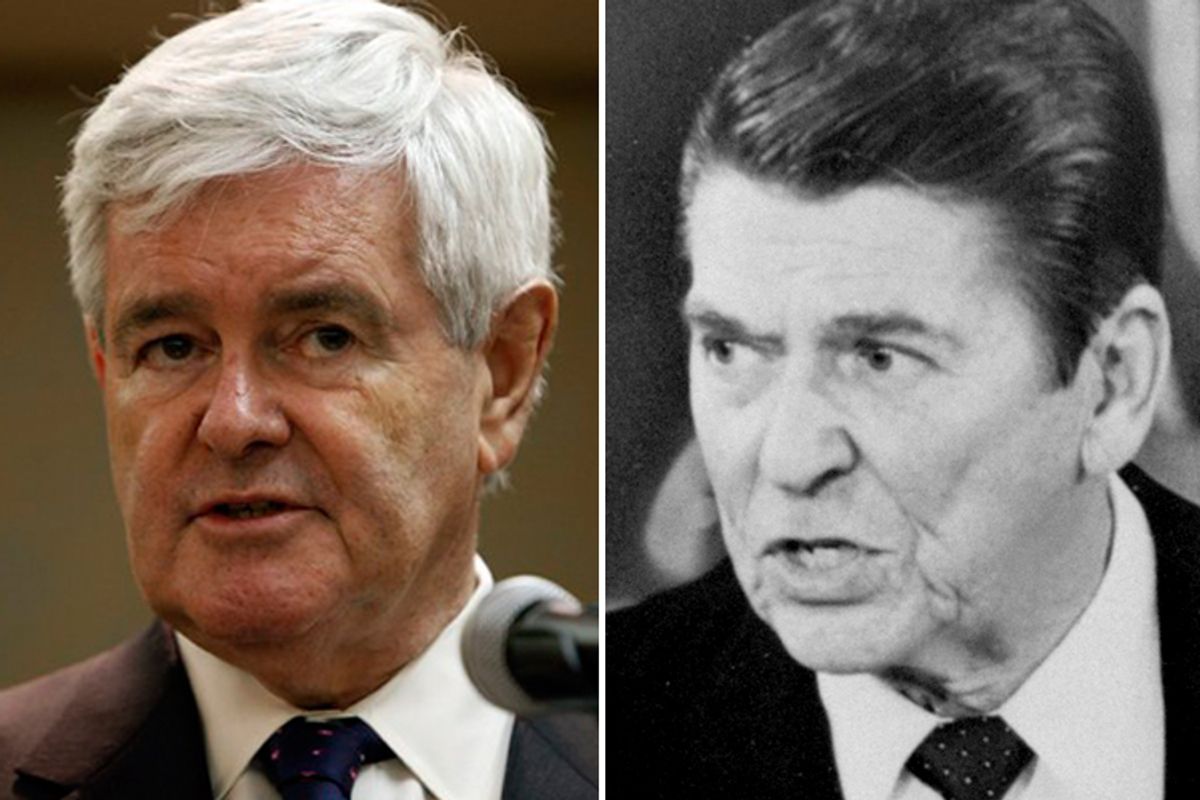 Sometime after he was told to drop out "before you make a bigger fool of yourself" and before we learned that he and his wife had racked up hundreds of thousands of dollars in debt at Tiffany's, Newt Gingrich convened a conference call Tuesday afternoon in an effort to put a good face on what has been an epically disastrous presidential campaign rollout.

In particular, conservative activists and opinion-shapers are still fuming over the surprise criticism he leveled against Rep. Paul Ryan's Medicare plan on Sunday's "Meet the Press," but according to the Washington Examiner's Philip Klein, Gingrich insisted that his rocky start as a candidate is nothing remarkable, likening his campaign to ... Ronald Reagan's:

"Every once and awhile there's going to be a problem, and you gotta spend three or four days fixing it," he said. "If you go back and look at Ronald Reagan's record, the opening week of the campaign in Sept. 1980, they didn't have a very good week. And they had to go back and fix it. This happens occasionally. The trick is to relax, look at it, try to figure out what happened, and keep moving."

This is one of Newt's favorite devices -- the "fatuous historical analogy," as Jonathan Bernstein has labeled it. Here, we are supposed to believe that Gingrich is in roughly the same political situation that the patron saint of modern conservatism was when he embarked on his history-changing campaign three decades ago.

Why this is a completely absurd comparison should be fairly obvious, but for the record:

It is hard to find a presidential campaign rollout that has failed as spectacularly as Gingrich's.

A logical parallel might be Joe Biden's in the 2008 cycle; on the same day in January 2007 that Biden filed his paperwork with the Federal Election Commission, his infamous "clean, articulate" comments about Barack Obama appeared in a New York Observer story. Biden, like Gingrich now, was already a long shot for his party's nomination, and the ensuing uproar merely validated why this was the case. But in another way, Biden's botched rollout wasn't nearly as destructive; the reaction from most Democratic elites was that poor old Biden had made another gaffe -- not that he was a bad guy who needed to be condemned and isolated. The conservative establishment's response to Gingrich has been much more hostile.

We've long known that Newt Gingrich is not a serious presidential prospect. In the last few days, the most influential voices in his own party have made it clear that they feel the same way. The question is: Will Newt ever realize it himself?