The former governor's betrayal goes beyond infidelity. How will the pair move forward, with children in the mix? 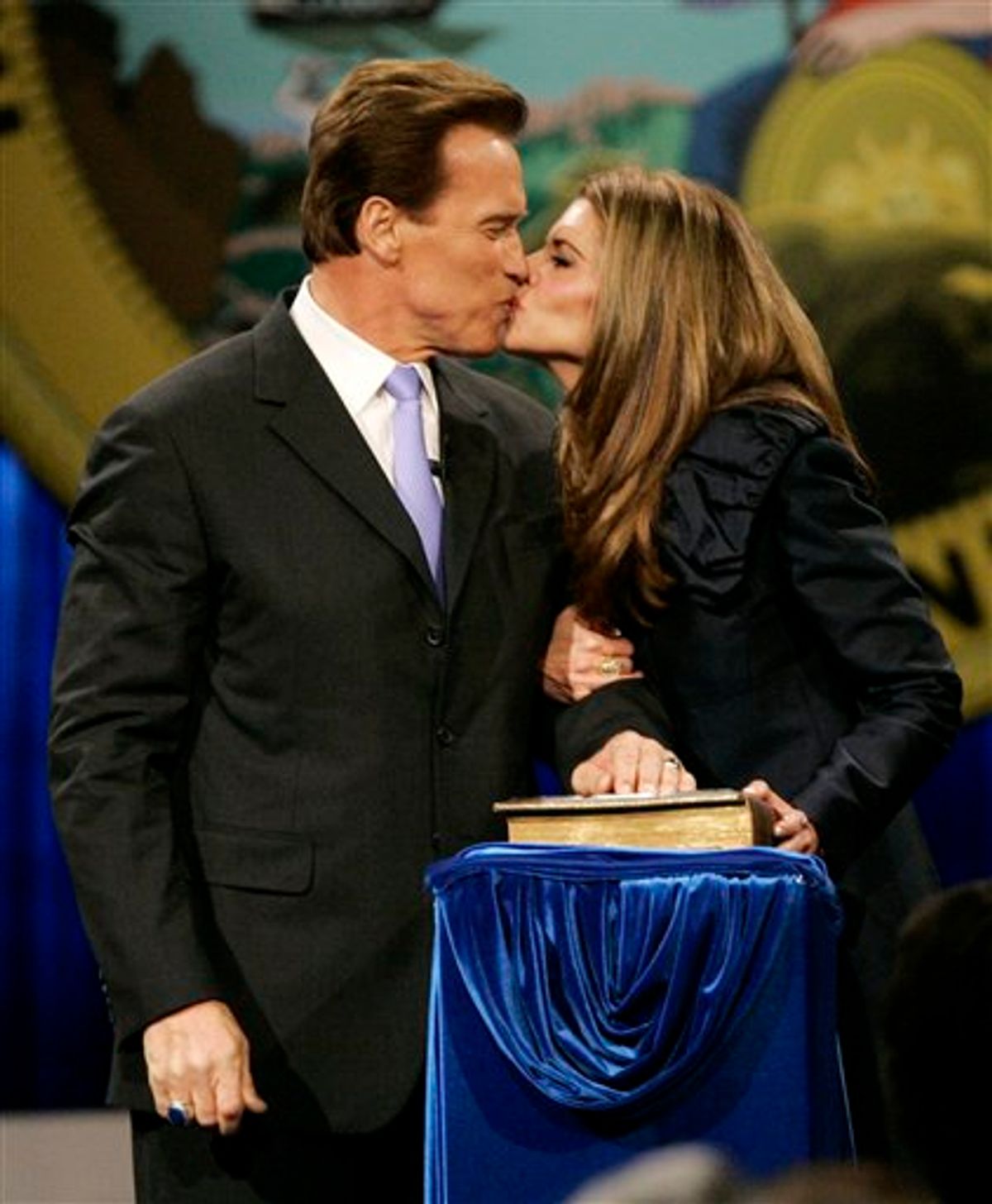 A marital breakup tends to be a painfully grim time. But when there's a secret child, we're pretty much off the charts on the "things that can go wrong in a relationship" scale. So spare a measure of sympathy today for Maria Shriver and all of Arnold Schwarzenegger's progeny, because they both got surprise families this week.

A breach of fidelity is agonizing under any circumstances. But if you're Dean Sheremet and your wife just ran off with Eddie Cibrian, you can choose to never be in the same room with LeAnn Rimes again. If you're Shania Twain and your husband's been putting it to your assistant, it's more complicated -- you've got to figure out how to be decent, for the rest of your life, to the father of your son. But like the late Elizabeth Edwards, Maria Shriver, the woman who famously lobbied on behalf of her husband's trustworthiness after a slew of sexual bombshells eight years ago, is now dealing not just with her husband's stark public admission of philandering, but also with the fact that her four children have a new sibling.

The idea that your spouse could be intimate with someone else -- or, if your husband is Tiger Woods, everyone else -- is hard. But the idea that your mate could do something as life-changing, as profound as having a child with someone else and keep the event unacknowledged, is downright mind-boggling. Shriver tersely said this week, "This is a painful and heartbreaking time. As a mother, my concern is for the children. I ask for compassion, respect and privacy as my children and I try to rebuild our lives and heal." She allegedly was unaware of the child until recently; Schwarzenegger has stated that "After leaving the governor's office I told my wife about this event, which occurred over a decade ago."

By "this event," by the way, he means he had a child. A human being who is in the world because of him. That's not just boning the help here. That's not an "event." That's a lifetime connection, however involved you ever chose to be or not to be, or however long it's taken to acknowledge it.

Sadly for Schwarzenegger's former lover and her offspring, they now bear the stigma of being known as his "other" family. Reporters have been eager to leap on the story of Schwarzenegger's "love child," a term that's outdated enough to be blatantly offensive -- although it still trumps the pathetically commonplace "illegitimate."  And in their zeal to uncover every shred of tawdry detail, outlets like Gawker, TMZ and Radar have been rushing to identify not just the woman but the kid, in a privacy-ravaging frenzy wracked with speculation and misinformation.

Meanwhile, Schwarzenegger's "legitimate" children have been understandably taciturn since the news broke. Seventeen-year-old Patrick tweeted, "some days you feel like shit, some days you want to quit and just be normal for a bit, yet i love my family till death do us apart. #family (and, interestingly, changed his profile last name to "Shriver"). And his 21-year-old sister, Katherine, tweeted, "This is definitely not easy but I appreciate your love and support as i begin to heal and move forward in life. I will always love my family!"

For Patrick and Katherine and Maria Shriver's other two children, as for Schwarzenegger's former lover and her child, the term "family" has now just changed radically. It just got bigger and messier and more complicated. The "events" the man at the center of the story participated in years ago aren't frozen in the past. They live on in his children -- all of them. Elizabeth Edwards may have once flippantly said of John's daughter by Rielle Hunter, "That would be a part of John's life, but not a part of mine. I can't see any upside to making it a part of my life," but your children's father is a part of your life, always. And he and his children from other relationships are sure as hell connected to your kids' lives.  Marriages may end, but as Schwarzenegger's son Patrick knows, family is till death do you part. And those Schwarzenegger family Christmases and Thanksgivings are never going to be the same.