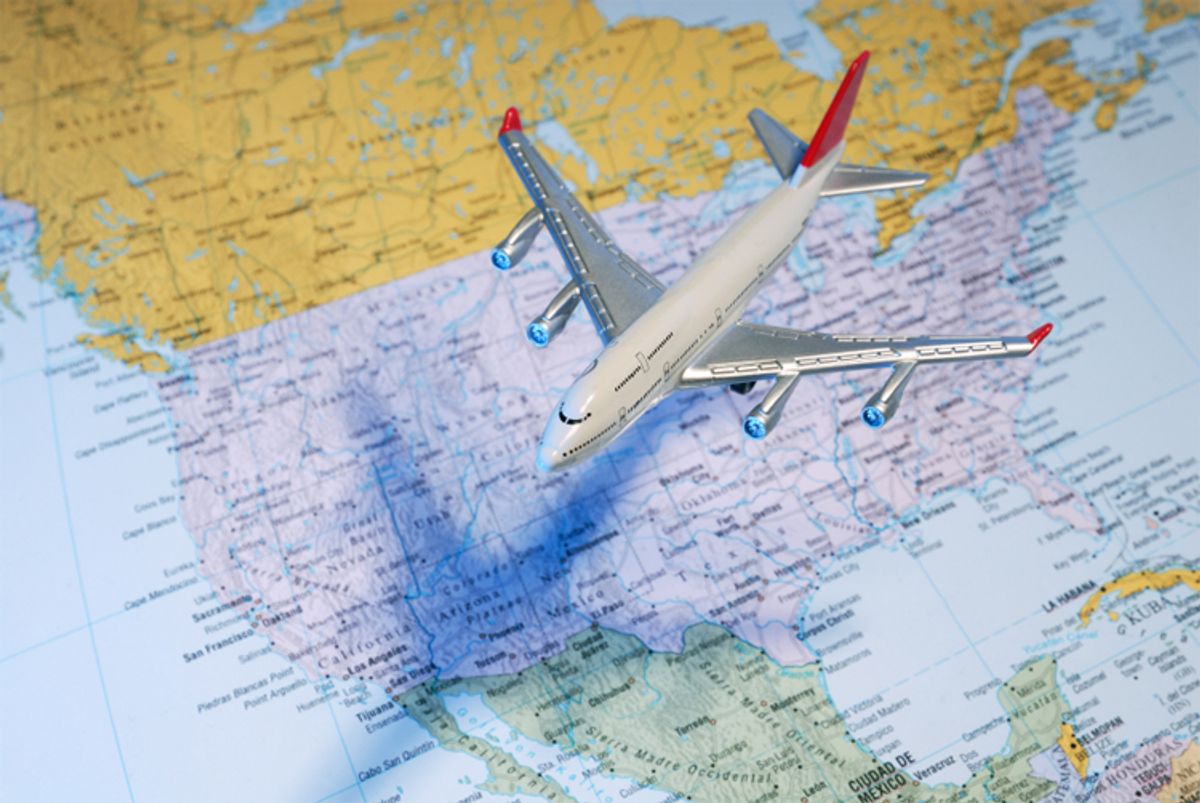 No more swanky international flying for this pilot -- not on a regular basis anyway. No more five-day layovers in exotic cities, no more fancy crew meals, no more mid-flight breaks watching movies in the crew bunk. It's back to the stateside grind: multiple legs a day, quick turns, 10-hour layovers at the Red Roof Inn, and savoring the fine cuisine of Sbarro and Chick-fil-A.

I'm often asked how it is that pilots get assigned to certain routes. The answer is simple: seniority. Or lack thereof.

How talented you are, or how swell a person you are, will not earn you a faster track to the captain's seat or get you those cushy layovers in Hong Kong. Neither will how many lives you managed to save in the throes of some emergency. Only your number can do that. It's at once fair and unfair; the ultimate insult and ultimate egalitarian tool -- dehumanizing, maddening and immensely important.

Thus a pilot's destiny has almost nothing to do with merit and everything to do with timing. Experience and skill, for all of their intangible value, are effectively meaningless. Seniority is the currency of value.

Normally, through hiring and attrition, a pilot's seniority ticks steadily upward. When business is bad, however, and airlines are contracting, it moves in reverse, adversely affecting everything from your schedule to which plane you fly. The salary hit can be considerable, or even catastrophic. Captains become first officers; and junior first officers become cab drivers. Following the 2001 terrorist attacks, more than 10,000 airline pilots were furloughed in the United States, yours truly among them.

(And yes, when a pilot resigns, is furloughed or is otherwise cast off from one airline and chooses to work at another, he will do so at the bottom of that new airline's roster, for probationary pay and benefits, regardless of experience. He resets that fancy watch and begins again, effectively as a brand-new rookie. This is industry standard and there are no exceptions.)

At the moment, the airline business is in reasonably good health. Things are perhaps a bit stagnant, owing primarily to fuel costs, but otherwise planes are full and the outlook is one of cautious optimism. But it doesn't take a nasty recession or a terrorist attack to set a pilot back. There is not only your overall seniority to worry about, but that within your base city. Airlines assign pilots to any of several "domiciles," as they're called, and each is like its own little airline with its own little seniority ladder. Meanwhile, people shuffle around; bases expand and contract; planes get swapped from one base to another, etc. Sometimes all it takes is a few senior colleagues to change their preferences, and suddenly your quality of life isn't what it used to be.

Case in point, me.

The seniority gods have smitten me, and here I am on a sort of Rediscover America tour, flying to places west of the Hudson River for the first time in years.

I would never use the word "glamorous" to describe international flying, but there is something dignified about it: The passengers are more patient, the flights more easygoing; overseas airports tend to be immaculate and their staff friendly. That's a pretty sweeping generalization, maybe, but on the whole it's a more civilized atmosphere.

On the domestic circuit, everything and everybody feels rushed and stressed to the limit. The planes are less tidy; the airports are noisy, dirty and packed. I'm at a busy East Coast terminal on a Saturday morning at 6 a.m. and the security line is 45 minutes long. Once at the gate I can barely get down the Jetway and onto my own plane, squeezing past a mad scrum of humanity -- parents and toddlers, college kids with oversize backpacks, angry-looking teenage girls with scrunched-up faces, snapping gum.

Operationally, too, it's very different.

I am struck, for example, by the amount of radio chatter in U.S. airspace. And it tends to be a lot more casual and slangy than you'll hear overseas.

And a question for my colleagues: Why the big obsession with "ride reports"? For those of you unfamiliar, pilots often query air traffic control on the whereabouts of the smoothest air, as reported by other flights. This can be very helpful -- to a point. Every two seconds, somebody, somewhere, is asking for a ride report. Got any ride reports up ahead? How's the ride at three-five-zero? What about three-six? Any ride reports at thirty-nine? Ride report, ride report, ride report. Enough already. ( No doubt this ties in to that very American obsession with the seat belt sign, discussed in this space a week ago.)

I also need to get used to these exotic new airlines and call signs. Like "JetBlue" and "Southwest" -- whatever those are.

Another peculiarity is that we barely see the flight attendants. With international flying there's the initial pre-trip briefing, and then you're with this big group of people for the next several days -- laying over in the same hotel, sharing rides to and from the airport, going to dinner together. Now, every leg you're swapping airplanes, and there's a new crew each time. The lead comes up front for a briefing and a quick hello, but often the others are just voices on the intercom. Then, at the next station, they're gone.

And the layovers are often solo. It's just the two of us, riding in a van to this or that cookie-cutter hotel.

On the other hand, I shouldn't be complaining.

I needn't be reminded how many young pilots out there would kill to have my job, and don't think for a moment that I take it for granted, regardless if I'm headed to Bangkok or Boise.

Besides, there is plenty about this domestic stuff that I enjoy. The pace, for one. Things move fast and there is little time to be bored. And the flying itself helps keep your piloting skills sharp, with frequent takeoffs and landings in and out of some very busy airports. I performed more landings (four) in the course of a single weekend than I'd made in the previous two months combined.

And once again I'm reminded that flying -- not just the idea of jetting off to exciting foreign countries, but the hands-on job of operating an airplane -- is actually really fun.

Here we are at the Embassy Suites. Or is it the Crowne Plaza? And is it Omaha or Fort Lauderdale or Phoenix? Does it matter?

Down in the atrium it's "manager's happy hour," where bartenders in polyester polos are handing out light beer in plastic cups.

There's a convention in town and the place is swarming. Who are these people? Is it a reunion? A sales meeting? All I know for sure is that I'm surrounded by a hundred or so boisterous men wearing bad suits and name tags.

Poolside there are artificial potted palms and faux-gaslight lanterns. There's a little "stone" bridge that is actually made of plywood and stucco, spanning a "koi pond" stocked with plastic fish.

Behind us is a chintzy mural of some romanticized American landscape painted in with animals -- an imagined vision of a wilderness that was long ago asphalted over, turned into subdivisions and carpeted with golf courses.

A conventioneer with an apocalyptic baritone is talking about the "awesome takedown" of Osama bin Laden. Another guy is raving about the hotel. "The wife would really love it here," he tells his friend, throwing his arms toward the artificial lanterns and make-believe koi. "Isn't this great!"

My own opinion is slightly different. Not to be such a downer, but to me this place isn't "great" at all. Forgive me, but I find it infantile and tacky and spirit-crushing.

But I keep my frustrations to myself, and the next thing I know the captain and I are across the street eating phony Mexican food at the mall.

The menu is decorated with cartoon burros and caricature hombres wearing sombreros. I'm ticking off the places I'd rather be. What I wouldn't give to be at Fonda el Refugio down in Mexico City; or that noodle place in Kowloon; at Bar do Juraez in São Paulo; or in Cairo at Abou Tarek, with a big dish of koshary while the call to prayer booms from some thousand-year-old mosque.  Instead I'm in a strip mall eating something called "Papa Pedro's Blazin' Enchilada," which tastes like cardboard dipped in turpentine, beneath a pair of flat-screen TVs blaring Fox News and a documentary about the University of Florida basketball team.

I ask the captain about his plans for breakfast. "I don't know," he answers. "Probably Denny's."

That one word -- Denny's -- pings and rattles through my brain for what feels like eternity, sending me bolt upright in my chair. Holy cow, I'm definitely not in Kansas anymore.

Except, that's the thing. I am in Kansas.