The Democrats' proposal to end tax subsidies for oil giants was bound to fail. What now? 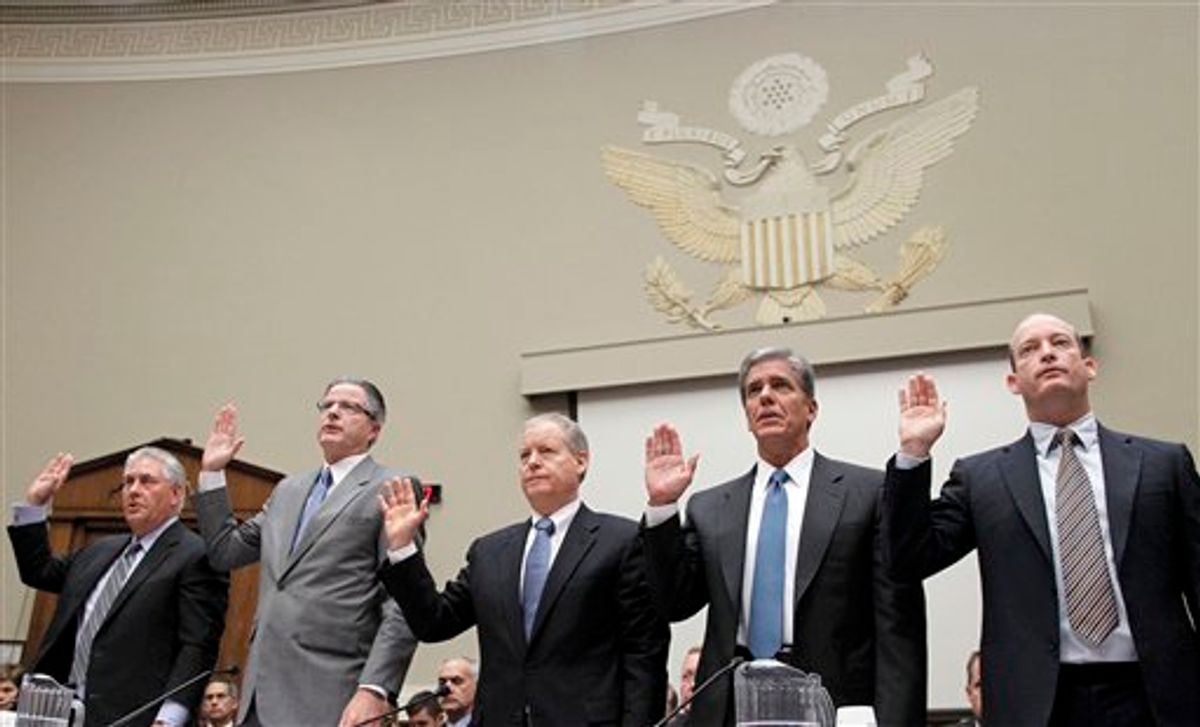 As expected, the Democrat-proposed bill to eliminate tax breaks for the biggest five oil companies was blocked by procedural vote in the Senate. The bill was eight votes short of the 60 needed to advance it, with three (oil-state) Democrats and all Republicans save for Maine's Olympia Snowe and Susan Collins voting against the proposal, which would repeal about $2 billion a year in tax subsidies.

The proposal's failure was little short of an inevitability and the Democrats who pushed it have been criticized for grandstanding on the issue. Last week Senate Democrats grilled top executives from oil companies BP, Exxon Mobil, Shell, Chevron and Conoco Phillips at a hearing on Capitol Hill, which was pure political theater.

To be sure, those in support of the proposal (the White House included) have absolute reason to be: Eliminating the tax cuts would reduce the national defecit by $21 billion over 10 years and as Sen. Chuck Schumer noted at last week's hearing, "You'd have an easier time convincing the American people that a unicorn just flew into this hearing room than that these big oil companies need taxpayer subsides, that's the real fairy tale."

It is a shame, then, that those standing against the tax breaks approached the issue in a way that does not genuinely challenge the subsidies and can only serve to score political points (the Democrats have publicly taken on big oil, while the Republicans have defended big industry -- both voting bases and the status quo have been satisfied). But the actual subsidies were never going to be voted away in the Senate -- least of all because, as TPM notes, the Constitution wouldn't allow for it ("eliminating tax loopholes raises revenues, and any legislation that raises revenues must, according to the Constitution, originate in the House of Representatives").

The Democrats, TPM noted, did not pay attention to the Consitutional technicality -- another concerning indication that their challenge to Big Oil lacked integrity.

So what now? Democratic leaders said after Tuesday's vote that a final deal to raise the nation's debt ceiling this summer would include a repeal of tax breaks claimed by the big five oil companies. Whether the oil industry will face a genuine challenge in Washington -- where they have long enjoyed the benefits, which come from spending hundreds of millions on lobbying and campaign contributions -- is yet to be seen. For now the pantomime continues:

Senate Republicans will take their turn voting for a bill doomed for failure Wednesday (they are pushing a plan to accelerate offshore drilling). And Democrats can reap the political boone of attacking oil tax breaks: The Democratic Senatorial Campaign Committee launched ads on Facebook and Google this week, which state "Gas Prices Are High Enough!" and have already devoted energy into highlighting that Republicans and Big Oil are "sitting in a tree."