Why Michele Bachmann should run for president

I used to think she was at the GOP fringe, but the party's in a race to the bottom. She's no worse than Gingrich 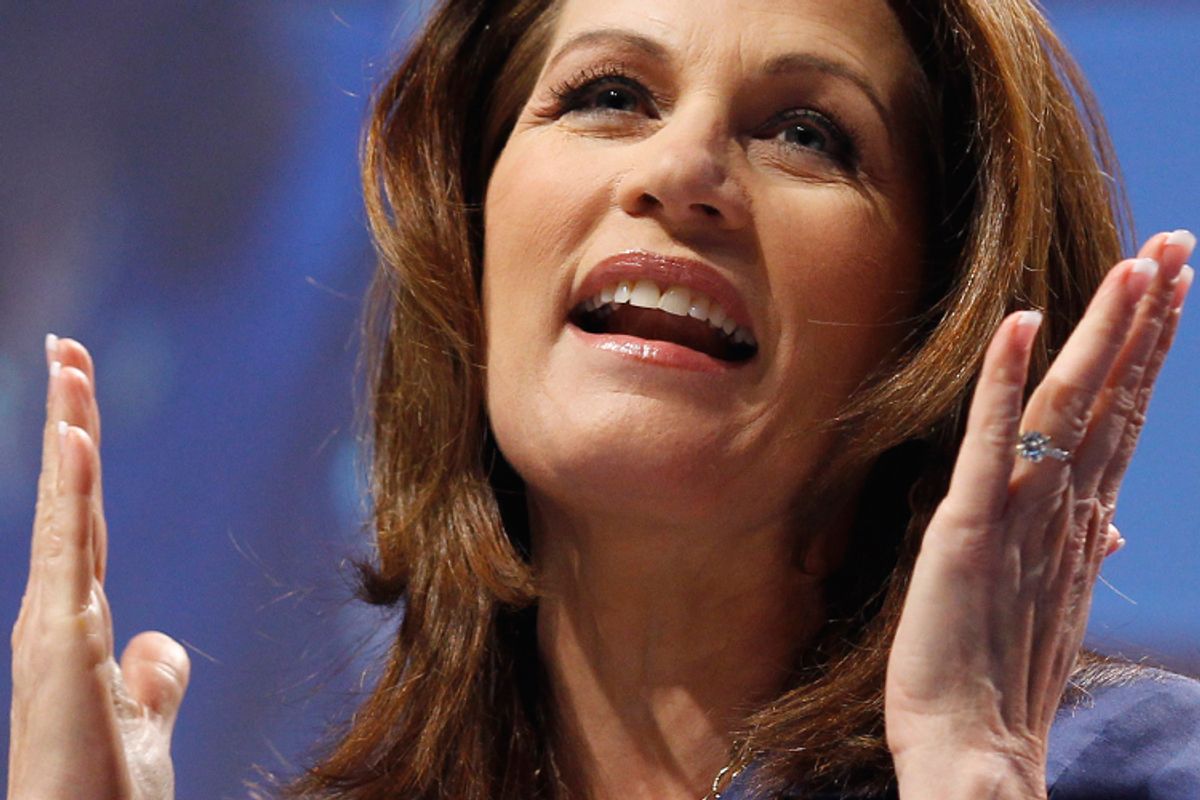 I know, I know, I already wrote my "Run, Michele, run" piece, but it was tongue-in-cheek, the chortling of a Democrat who couldn't believe President Obama would be lucky enough to have a chance at Michele Bachmann in November 2012. She just seemed so far outside the GOP mainstream, even on the Tea Party fringe, with a gift for saying such profoundly stupid things, I couldn't take her seriously.

I'm beginning to take her kind of seriously. Because as the likely GOP contenders engage in a race to the moral, intellectual and political bottom, Bachmann's not really worse than the rest of them.

Tuesday Bachmann claimed she's riding a grass-roots wave as she ponders a presidential run in the wake of announcements by Donald Trump and Mike Huckabee that they won't make the race. "Well, I think what this has changed is the grass roots, and what they're looking for," Bachmann told Fox News. "Our phones have been ringing off the hook, our Facebook has been lit up, our donations are pouring in. And people are saying, 'Michele, jump in, we want you to run.' And we had announced earlier that we would be looking at a June entry date for a decision one way or another about this race. Possibly, we may move that up."

One day later, she can add Newt Gingrich's spectacular campaign flameout to her reasons for making a run. Watching Gingrich over the last few days convinced me that Bachmann is as credible as he is. Statesman, college professor, serious guy, Gingrich has been on the national stage for more than two decades; he's supposed to know better. But there he is making barely coded racist statements, flip-flopping on the Ryan budget and the individual health insurance mandate, and finally dismissing questions from Fox News about the hundreds of thousands of dollars he owes to Tiffany as "gotcha" journalism. That's Fox News, Newt! He's toast.

OK, Bachmann doesn't know in exactly which state American rebels fired "the shots heard round the world," she believes the founders "worked tirelessly to eradicate slavery" though many owned slaves, and likes to refer to the Obama administration as "gangster government," which is up there with Gingrich's references to Detroit and food stamps as racial dog whistles pretty much everyone can hear. She's a far-right demagogue -- but in a race where even moderate candidates are running to the right, why not offer voters the real thing?

Minnesota Gov. Tim Pawlenty used to tell the truth about climate change -- that it's human made, and we can and must do something about it -- but he's now recanted. Mitt Romney passed decent healthcare reform in Massachusetts, but he's tripping over his feet trying to run away from it. Indiana Gov. Mitch Daniels wisely tried to declare a "truce" on the social issues that are driving away independents from the GOP -- and then defunded Planned Parenthood. Gingrich told the truth about the Ryan budget -- it is "right-wing social engineering" -- and then took it back. I think he had to buy Paul Ryan a big diamond ring, like Kobe Bryant bought his wife after he shamed her, to make up for it (maybe that's the Tiffany's bill). These guys know better, and they're acting like craven know-nothings; maybe it's an advantage to be the person in the race who isn't acting.

Then there's Rick Santorum, claiming Sen. John McCain knows nothing about torture. That's not even worth a full-blown story, just a sentence: Rick Santorum will never be president.

I already said Sarah Palin won't be president, and I don't expect her to run, either. She seemed to share Bachmann's regular-gal approach to campaigning, and a genuine zest for nasty attack politics, but Palin's narcissism and talent for self-pity have made her a bad candidate: It's all about her now, not the people she's purporting to represent. Plus, she's happy making a ton of money and pontificating on Fox. I think Bachmann could inherit the Palin role.

Now, I also believe, maybe delusionally, that outside of a right-wing fringe, even most Republican voters care enough about their country to reject Bachmann's divisive and uninformed political appeal. But since no Republican seems ready to test my hypothesis, Bachmann may as well go for it and be herself.

We talked about the likelihood of a Bachmann candidacy today on MSNBC's "Hardball."