A few fair complaints about Obama drown in a sea of personal racial attacks. Is this how identity politics ends? 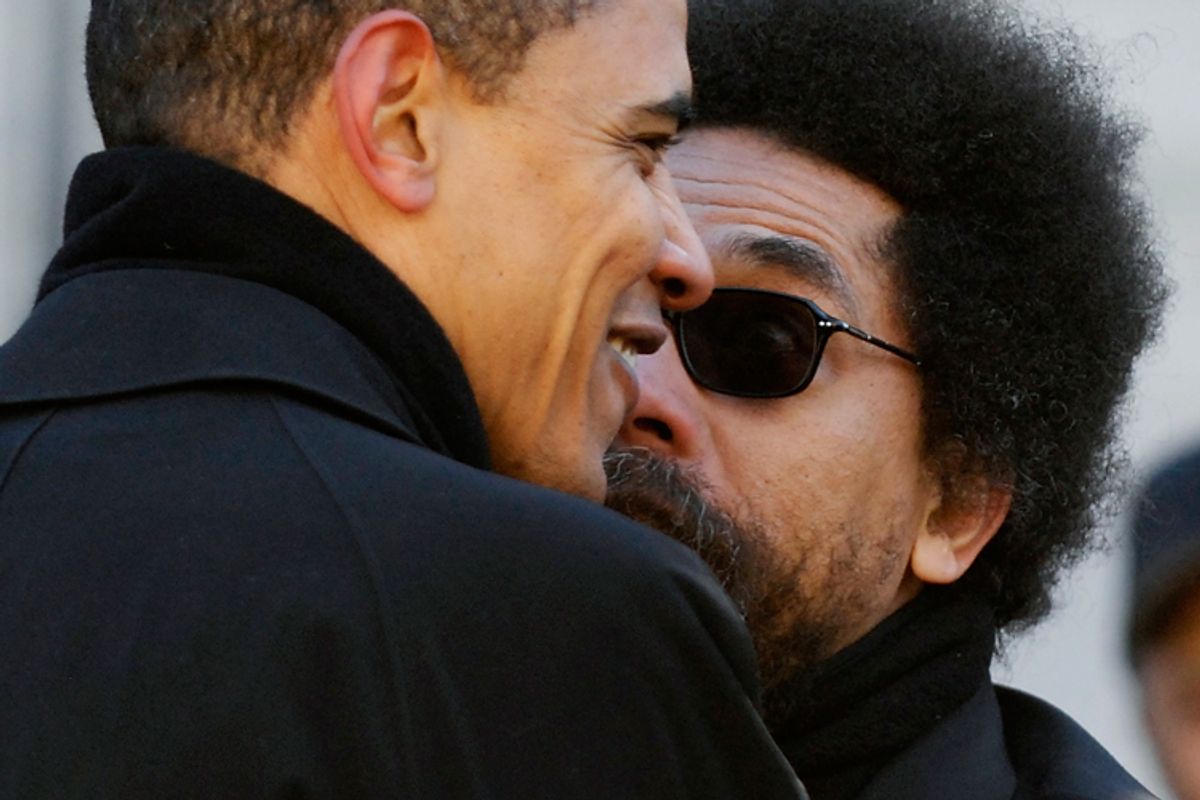 Melissa Harris-Perry and Adam Serwer wrote majestic takedowns of Cornel West's vicious and deeply personal rant against President Obama published this week, so I didn't think I had to. But there's one thing missing in the torrent of reaction to West I've seen this week: a recognition that maybe this is the way identity politics had to end, not with a bang but a whine. Dizzying racial and personal insults have come from all directions, and they're beginning to lose their meaning.

Much has been made of the personal pique that animated West's attack on the president: How dare the bellhop at West's hotel Inaugural Weekend wind up with tickets to the event itself when West didn't? How could Obama stop returning his calls? West's animus was impossible to miss, and it clearly drove the awful, ad hominem anger of West's invective.

The most tragic thing, to me, about West's meltdown was the way he tried to frame it as a universalist defense of poor and working-class people -- who in fact haven't gotten enough help or attention from this too-close-to-Wall Street administration -- but then somehow descends into personal attacks on the president as "a black mascot of Wall Street oligarchs and a black puppet of corporate plutocrats." If that wasn't bad enough, West claims Obama's problem is that he is afraid of "free black men" due to his white ancestry and years in the Ivy League. "He feels most comfortable with upper middle-class white and Jewish men who consider themselves very smart, very savvy and very effective in getting what they want," West claimed.

Give Brother West credit for consistency: On MSNBC's "The Ed Show" Tuesday night, he repeated his criticism that Obama is too close to "upper-middle-class white brothers and Jewish brothers."

Oh no, the Jews again. Haven't we been here before?

How did the man who wrote in "Race Matters" that it's time "to replace racial reasoning with moral reasoning" come to this? I don't disagree with some of West's critique of Obama, but Ta-Nehisi Coates is exactly right here:

Was there something more Obama should have done to get a public option? Should he not have traded the Bush tax cuts for extending unemployment benefits? Did Obama settle too quickly on a small stimulus package? Was he wrong to allow the GOP to shut down planned parenthood in DC? Is the strategy of increased drone attacks in Pakistan inhumane? Was the financial reform bill he signed ultimately too weak?

I think all of this is fair game. I think Charles Ferguson's critique in Inside Job was really solid. I think calling someone a "black mascot" or a "black puppet" because they don't agree with you is much less so.

But there's a way in which this whole controversy looks like progressives devouring their own tail. From the left, West attacks Obama for not being black enough; I've written about being attacked as a clueless, entitled white progressive for criticizing Obama; in a pro-West backlash, black Obama supporters are being dismissed as "elitist" fronts for white liberals and that half-white guy in the White House. It's crazy. The only good thing about the fracas is that maybe, finally, America will learn that there's no monolithic "black community" and no one set of black leaders: The diversity of African-American opinions about the West-Obama tangle has been fascinating. And the ways that race comes into play when debating the achievements of our first black president shouldn't be surprising. But it's starting to obscure more than it reveals.

The focus on identity is stifling: I've seen people take potshots at many of the players involved based on their status in various Ivy League debates over the last decade. Preposterously, West attacks Obama's Ivy League background -- yes, the president has degrees from Harvard and Columbia -- when West has been sheltered beneath the cool ivy himself for most of his career. West defender Boyce Watkins of Syracuse University continued with the Ivy League slurs, trashing Melissa Harris-Perry as "a darker-skinned staple in the white liberal establishment" and an "Ivy League" pro-Obama sellout; other critics have suggested the Nation writer is attacking West because they didn't get along at Princeton. (Disclosure: Harris-Perry is a friend of mine who has brought me to speak at Princeton; now she's headed to a new post at Tulane University.) A few people have linked West's beef with Obama to his clashes with former Obama advisor Larry Summers back when Summers was Harvard's president, and West decamped to Princeton. Is our troubled country really supposed to care about who didn't get along with who in the Ivy League? Can I dismiss what all of them say because I went to a fine land-grant college, the University of Wisconsin? That would be stupid, right?

The larger subtext here is a boiling progressive debate about whether, how and how much to criticize the president, and unfortunately, some of it is racial. I'm on record saying that despite my disappointments on the economic and civil liberties front, I support Obama's reelection: He's as progressive a leader as we're able to elect right now, and if you have issues with him -- as I do -- it's time to work to elect strong Democrats at the state and local level. I'm pro-Obama -- and also pro-reasonable organizing efforts to push him left. I also believe that there's a cruel racial component to the right's revolt against Obama, and in that context particularly, I understand that many African-Americans are understandably protective of our besieged president, and bothered by what they see as carping from the unrealistic left.

But I continue to observe a disturbing ad hominem campaign against Obama critics (the Twitter war rages on, with or without me). If you're white, it's "white privilege" speaking. If you're black, you're old or jealous or angry you're left out of Obama's inner circle. If you're neither white nor black, you just don't get American race relations and you should "STFU." Just today on Twitter, I saw two (white) progressives I respect make wildly contradictory and nasty generalizations about a grouping of Obama critics (of different races; I wasn't among them): One suggested they're trashing the president for fame and money; the other that they're angry they've been marginalized by Obama's popularity. Which is it?

It couldn't possibly be that any of these people, whatever their age, race or social class, wherever they went to school, have genuine differences with the president? (Or conversely, in the case of Obama defenders being attacked racially and personally, have wonderful and sincere reasons for continuing to support him fervently.) No one can be given credit for speaking from genuine moral or political conviction anymore; everyone can be dismissed or derided with a nod to their personal background. This may be the logical end of identity politics, where ultimately we're each locked inside whatever little box we check, tiny caucuses of one, and common ground is impossible.

Ironically, this is a relatively ancient -- circa 1967 -- left-wing Democratic Party debate: How much do you push the most liberal president you've had to date, and is there any situation in which you abandon him? I'm not saying Obama is Lyndon Johnson, or that any of his foreign policy troubles add up to the nightmare of Vietnam, but some of the current tension reminds me of the split mostly between labor and the New Left, and a little bit within the civil rights movement, about the "Dump Johnson" movement. Only a few fringe characters, West among them, are suggesting anyone "Dump Obama" and challenge him in a Democratic primary (or even more nihilistically, with a third-party run). But the tensions are similar, even if the players are different; much of labor sided with Johnson, the New Left abandoned him, while Rev. Martin Luther King Jr. came out strongly against Johnson's war, and other civil rights leaders balked at bucking the president. One of my favorite figures of the time, the gay, left-wing visionary Bayard Rustin, surprisingly (to me) argued in favor of sticking with Johnson and avoiding the antiwar movement, terming it "distinctly unprofitable and possibly suicidal" for civil rights leaders to abandon the president over the war. Race played in multiple ways in that painful schism. These have never been easy choices; for anyone to pretend there's a right answer now is silly.

The saddest thing is, West thinks of himself as a great left-wing universalist. "This discussion is in no way about me, it has to do with poor and working people having low priority in US governmental policy," he Tweeted Tuesday, as his words ignited a firestorm. Yet he critiqued the president in deeply personal and racial terms -- and now he himself is critiqued the same way. Maybe it's justice.

Former Biden economic advisor Jared Bernstein wrote a really great piece about why he left the White House: It's pro-Obama, it's compassionate, it's fair-minded and it's also critical. This is the discussion we're supposed to be having. That West mess is a lamentable sideshow.