A bad week for the males of our species

One day it's a French diplomat, the next Arnold Schwarzenegger: Does their behavior really shock us? 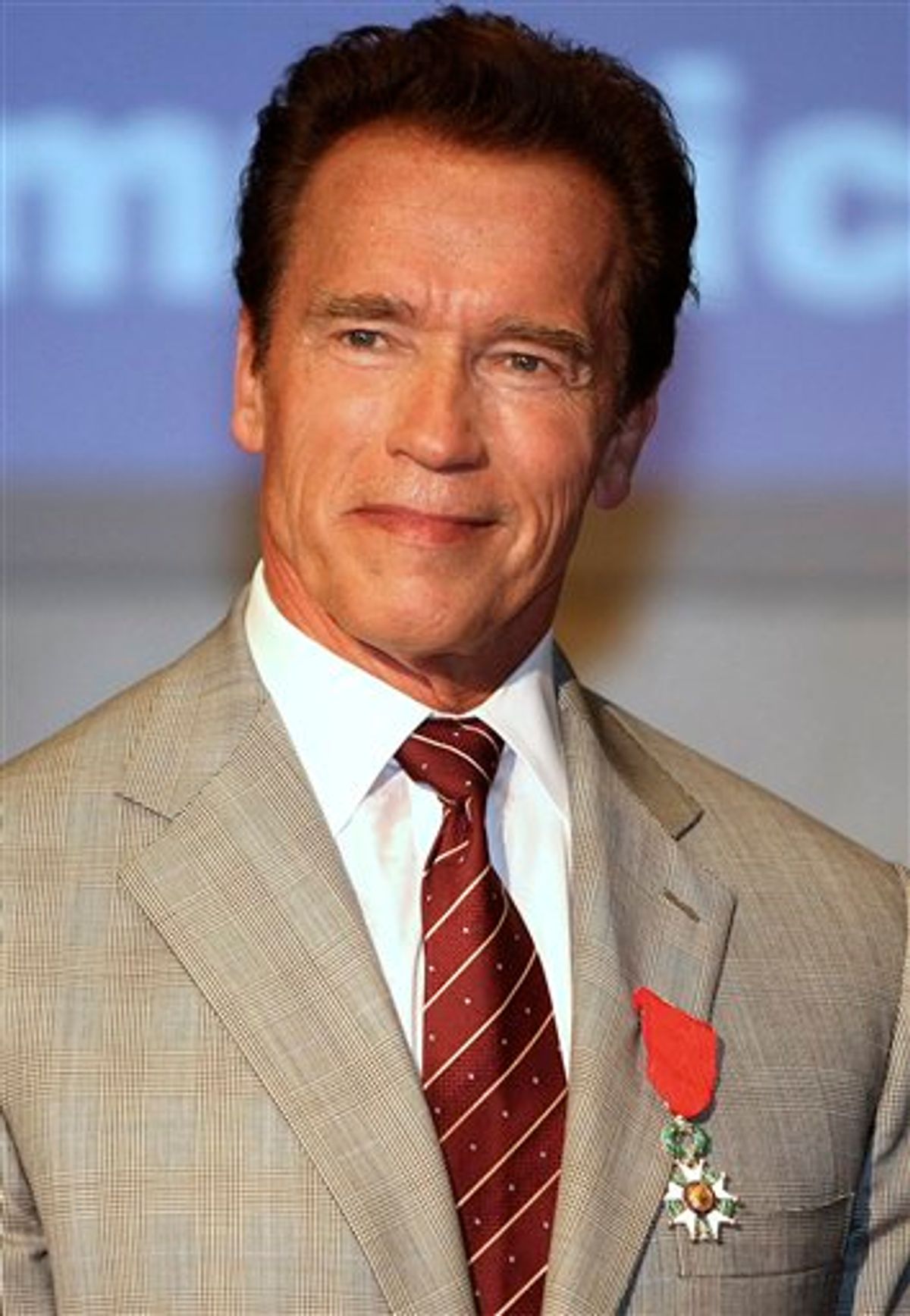 Austrian-American, actor and former California Governor Arnold Schwarzenegger, poses after receiving the insignia of Chevalier in the Order of the Legion of Honor during the MIPTV (International Television Programme Market), Monday, April 4, 2011, in Cannes, southern France. Arnold Schwarzenegger is back in Cannes for the first time in eight years to unveil a new international television series "The Governator". (AP Photo/Lionel Cironneau) (AP)
--

When you live in the country, it’s hard to respect the male of the species -- any species. Apart from fighting, roosters think of nothing but hens. Brutus, the bull across the road, neglects his four-cow harem to bellow endearments to our cute young heifers.

Recently a miniature stallion showed up courting our mare Savannah. Half Thoroughbred, half Shire, she stands 18 hands and 1,500 pounds, the boss of bosses on our place. Her expectant lover couldn’t have weighed 250 soaking wet, which he was. These things only happen in bad weather.

Confronted by Savannah’s gelding brother, the tiny horse reared and bared his teeth in challenge. Hannibal ran him down like an 18-wheeler flattening an armadillo. By the time I got a rope and hauled the little guy to safety, all the fight was out of him.

The next day he challenged my neighbor’s quarter-horse stud through a barbed-wire fence. “You want a piece of me?” Redman might have killed him, but not before tearing himself to pieces. Ah, but one mare found the little fellow so appealing she lay on the ground trying to accommodate his desires.

So why are we shocked by philandering politicians? During national hysteria over Bill Clinton’s sins, my veterinarian friend Randy remained calm. "Enhanced breeding opportunities," he explained "are the whole point of becoming an Alpha male among the primates."

Actually, people are more titillated than shocked. Celebrity sex scandals have been a circulation-builder since the invention of the printing press. Lately, it’s hard to keep the players straight without a scorecard -- whether it’s former Democratic V.P. candidate John Edwards auditioning for rat of the century, or GOP Sen. John Ensign paying a staffer $96,000 hush money for seducing his wife.

One day it’s a French diplomat, the next former-Gov. Arnold Schwarzenegger. Remember when Republicans wanted to amend the Constitution so the Austrian-born action film hero could be president?

Meanwhile, every randy rooster in politics -- that is, virtually all of them -- should unite behind Newt Gingrich. If Newt wins the GOP nomination, anything goes. Edwards and Ensign can start planning their comebacks.

Alas, Gingrich’s only constituency appears to be the Washington political press. "The Republican thinker-in-chief" Time called him recently. Pundits worry that Newt may be too brainy for voters. "Can the Professor Connect?" the magazine wondered.

Didn’t these people go to college? Academically, Gingrich is the worst kind of faculty lounge-lizard, a third-rater in his own discipline given to sweeping pronouncements about subjects he barely comprehends.

This is the intellectual who blamed a mother’s drowning her children on Democrats. "I think that the mother killing the two children in South Carolina vividly reminds every American how sick the society is getting and how much we need to change things," Gingrich said. "The only way you get change is to vote Republican."

Susan Smith’s stepfather turned out to be a GOP county official who'd abused her. But that’s immaterial. Gingrich’s attempt to exploit the tragedy showed exactly what he is: a callow hypocrite who brought his first wife divorce papers while she was hospitalized for surgery, and who sneaked around on the second while impeaching Bill Clinton.

Now a pious Catholic convert, Gingrich recently explained how he’d fallen into the arms of wife three: "There's no question at times of my life, partially driven by how passionately I felt about this country, that I worked far too hard and things happened in my life that were not appropriate."

On a more serious note, politicians who get cold feet often say they’re backing off for their family’s sake. But in my opinion, Indiana Gov. Mitch Daniels is one who really should. The putative GOP presidential candidate’s wife, Cheri, reportedly fears the inevitable assault upon her privacy, as well she may.

Some years ago, Cheri left her husband and four daughters for another man and ran off to California. After three years she returned and the couple remarried. Good for them, bad for his presidential ambitions.

On CNN’s "Reliable Sources," a panel of women pundits agreed that there can be no zone of privacy for presidential candidates.

Voters, meaning themselves, will demand to know all.

"You're not picking a president," Newsweek’s Michelle Cottle explained, "you're picking a husband or a boyfriend or a father to run the country."

She actually said that. The Daniels have been put on notice. Should he run, their lives will be turned into a tabloid morality tale: Anna Karenina for Dummies. Everybody involved, including their children, will be found, cross-examined and psychoanalyzed by strangers.

Voyeurism is a sadistic activity: mean, relentless and stupid. Millions will demand to know things about the Daniels marriage they scarcely know about their own. Then, he’ll lose.

I cannot see how it can possibly be worth it.