How Gingrich can still win the GOP nomination -- and the presidency

Step aside, cowardly Beltway establishment sheep literati, because Newt's still got a clear path to victory 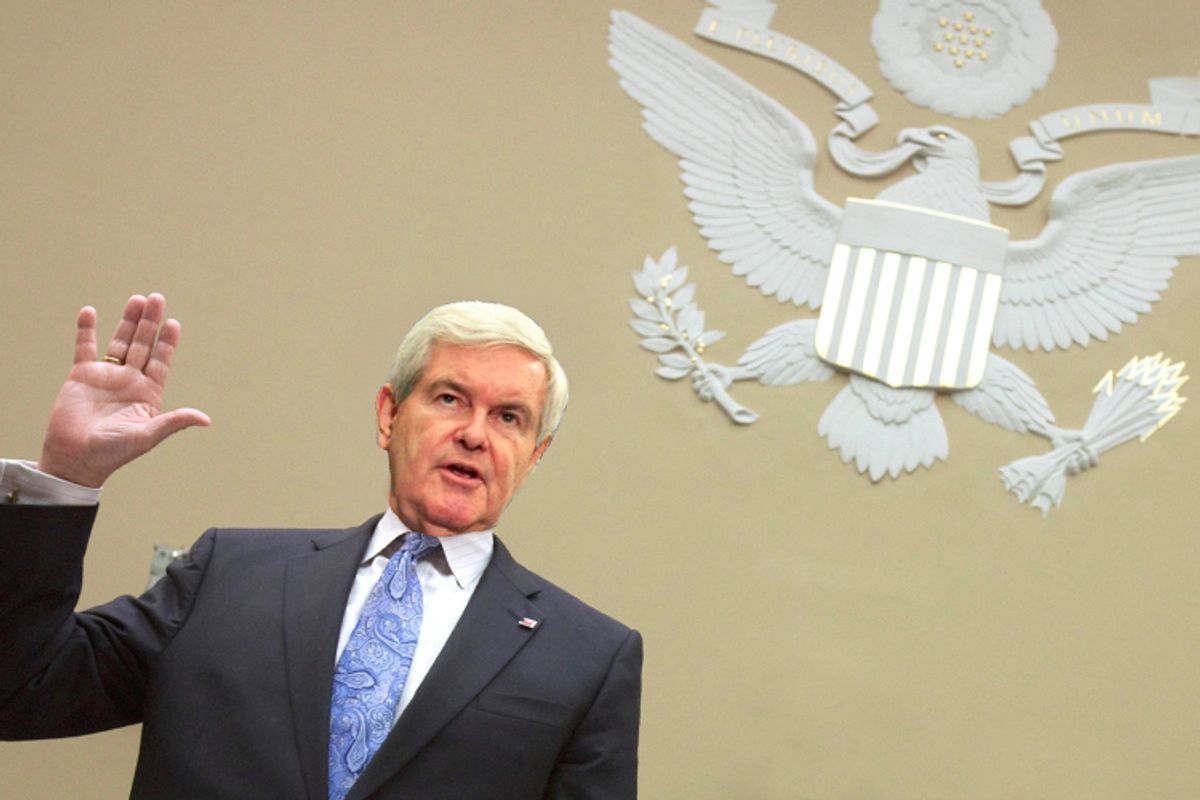 The elite Beltway smear-merchants of the lamestream media claim that Newt Gingrich's various "missteps" this week -- attacking the Republican Party's budget proposal as extremist, then retracting that statement, then saying that quoting him was somehow "a falsehood"; getting yelled at by an Iowa voter and "glitter bombed" by a gay rights activist; owing between a quarter- and a half-million dollars to Tiffany and Co.; calling Barack Obama a "food stamp president"; and finally releasing a statement claiming that his critics were armed sheep working for "the literati" -- mean his campaign for the Republican nomination is doomed. But what do they know? As his flack wrote yesterday, "out of the billowing smoke and dust of tweets and trivia emerged Gingrich, once again ready to lead those who won’t be intimidated by the political elite and are ready to take on the challenges America faces.”

Here's how Gingrich can win it, and why it's short-sighted to count him out so soon:

First, assume that Barack Obama publicly hugs Michele Bachmann sometime in the next month. Mitt Romney's religion becomes a bigger liability this summer when radical Mormonists are arrested in an FBI sting attempting to purchase bomb-making materials from undercover agents. The Mormonists express a desire to blow up Infidel Liquor Stores in Nevada.

While Romney attempts damage control by announcing that he was never a Mormon, Gingrich's strong opposition to the construction of a Latter Day Saints meetinghouse in Ely, Nev. -- "in the shadows of the Great Basin Inn & Quick Mart" -- helps him take the lead in every major early-state poll.

Meanwhile, it becomes OK to believe in climate change again, as long as you blame it specifically on Barack Obama and Bill Clinton. Gingrich un-reverses himself, argues that Obama is purposefully attempting to melt the ice caps in order to drown white people with beachfront property.

After wins in Iowa and New Hampshire, all the rest of Gingrich's candidates drop out in shame.

Gingrich beats Obama with 50.01 percent of the vote because unemployment stays high next year.

That's just one possibility. Other paths to a Gingrich win include:

In this scenario, most of the GOP candidates and would-be candidates will be in the clouds with Jesus. Gingrich, a recent convert to Catholicism, probably takes an Amillennial view of Revelations, and will remain on Earth with the sinners. He'll still have to defeat Tea Party favorite Herman Cain, who may or may not be a charming antichrist figure, but Gingrich will probably be able to take advantage of the fact that most Tea Party-affiliated Republican primary voters will have already raptured.

This was also Rudy Giuliani's plan to win the nomination in 2008, but it could work better this time around.

Newt promises everyone who votes for him an exclusive peek at "The Twilight Saga: Breaking Dawn"

Locks up the votes of everyone in America with a heart.