Waiting for that magical Republican savior

Help! Someone save us before we have to nominate Tim Pawlenty! 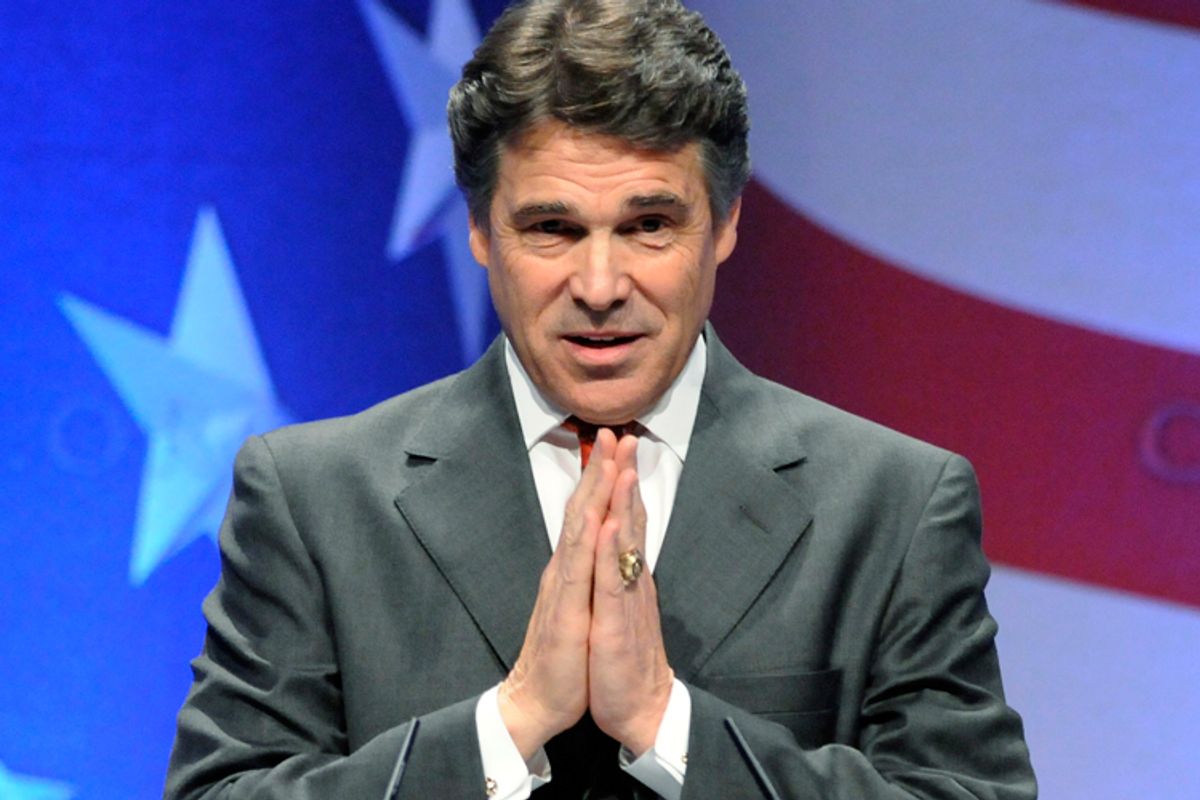 The news this week that Rick Perry, the longest-tenured governor in Texas history, may be eying a late entry into the presidential race has returned attention to what has so far been a consistent dynamic of the '12 campaign: Republicans' broad dissatisfaction with the options they have -- and their vague desire for a "white knight" candidate to ride to their rescue.

Perry is only the latest GOP leader to be touted for this role. For months, Chris Christie has been urged to consider the race -- and his adamant resistance has hardly muted the pleas.  Jeb Bush's name still comes up occasionally, and Rep. Paul Ryan's has been mentioned too. This chatter prompted TAPPED's Paul Waldman to ask:

But is there a single case from the modern era of primary campaigns (which began in 1972; I'll spare you the lecture on the McGovern-Fraser Commission reforms) in which someone entered the race relatively late after not being sure they wanted to run, then won the nomination and the presidency?

Waldman argues that, in the modern era, nominees always end up being candidates "who knew they were running and began preparing long before the race began," and that late-entry candidacies "always fail."

This really overstates what we've learned from modern presidential election history. It's true that there are two recent high-profile examples of supposed white knights whose candidacies fell flat -- Fred Thompson in 2008 and Wesley Clark in 2004. But there really aren't any other examples of genuine white knight candidacies in the modern era. (Here, it's important to distinguish between white knights -- that is, established political leaders whose late entries were preceded by loud pleadings from members of their party -- and candidates who simply started late.)

We can probably start by tossing out the 1976 cycle, when two Democrats -- Frank Church and Jerry Brown -- mounted extremely late-starting campaigns. Both aspired to be and were touted as white knights, but neither understood the new, post-reform reality -- that campaigns could no longer be launched midway through the primary season. Brown actually ended the '76 primary season on quite a roll, with wins in Maryland, Nevada and California (and, sort of, Rhode Island and New Jersey too). But by that point, Jimmy Carter -- the first Democratic candidate of the modern era to wage a truly complete primary/caucus season effort -- was too far ahead to be stopped. Maybe Brown (and Church) would have fizzled in a longer campaign; all we know from '76 is that they both did quite well but ran out of time. Their experiences demonstrated to future candidates that nominations were now settled in primaries -- not at conventions.

There were no white knight efforts in either party in 1980, nor was there one in the Democratic primaries of 1984 (although a young Delaware senator named Joe Biden almost jumped in in December 1983). There also wasn't one in either party in 1988, unless you count Gary Hart's decision to reenter the Democratic race (which he'd left after a sex scandal seven months earlier) in December 1987. But Hart doesn't really qualify as a white knight; party leaders weren't clamoring for him to run -- only his ego was. When he resumed his candidacy, he raised no money, built no organization, and quickly plummeted in polls. Pat Buchanan, who launched his GOP primary 1992 challenge to George H.W. Bush nine weeks before the New Hampshire primary, also doesn't count as a white knight -- just a late-starting, no-shot protest candidate. Steve Forbes was a late starter in the 1996 cycle, jumping in the Republican race in the fall of 1995; but again, he wasn't really a white knight -- it's not like his entry was preceded by months of pleading from conservative leaders and activists for Forbes to rescue them. It was only months after he entered the race -- when he dumped huge sums of his own money into television ads that touted a flat tax and shredded Bob Dole -- that Forbes suddenly became a relevant figure in the '96 mix. There were also no white knights in 2000 in either party.

This is especially true when you consider the biggest white knight candidacy that almost was -- Mario Cuomo in 1992. Obviously, we will never know what would have happened if Cuomo had boarded that Albany-to-Concord flight in December 1991, when polls showed him running far ahead of the rest of the Democratic field. It's certainly possible that, as a national candidate, he would have been an epic disaster -- that he would have committed horrible gaffes, alienated key party leaders and constituencies, been undermined by some scandal, or just run a generally dismal campaign. But it's just as possible that he would have won -- especially when you consider that the man who would have been his chief rival, Bill Clinton, was caught up in multiple scandals just weeks after Cuomo decided not to run. One of those scandals, in fact, involved Cuomo -- with Clinton disparaging the New York governor as "Mafioso" in a taped conversation with a mistress, Gennifer Flowers. Clinton weathered the scandals in part because Democrats had no where else to turn. With Cuomo in the race, it would have been a different story. (For a much more thorough discussion of the entire "Hamlet on the Hudson" saga and what a Cuomo candidacy might have looked like, check out the piece I wrote for Capital New York recently.)

The lesson of the modern era, it seems, isn't that white knight candidacies can't work. We just haven't seen enough of them to make a sweeping statement like that. The best we can say is that we ought to be cautious in assessing the prospects of a potential white knight -- to account for the fact that any white knight won't seem nearly as new and exciting once he or she actually enters a race and has to compete directly with other candidates. So while I wouldn't say that Chris Christie or Rick Perry would definitely do well as candidates, I would absolutely say they could.