Why did Schwarzenegger ever have a movie career?

The Governator is putting Hollywood on hold. But how on earth was he a successful actor in the first place? 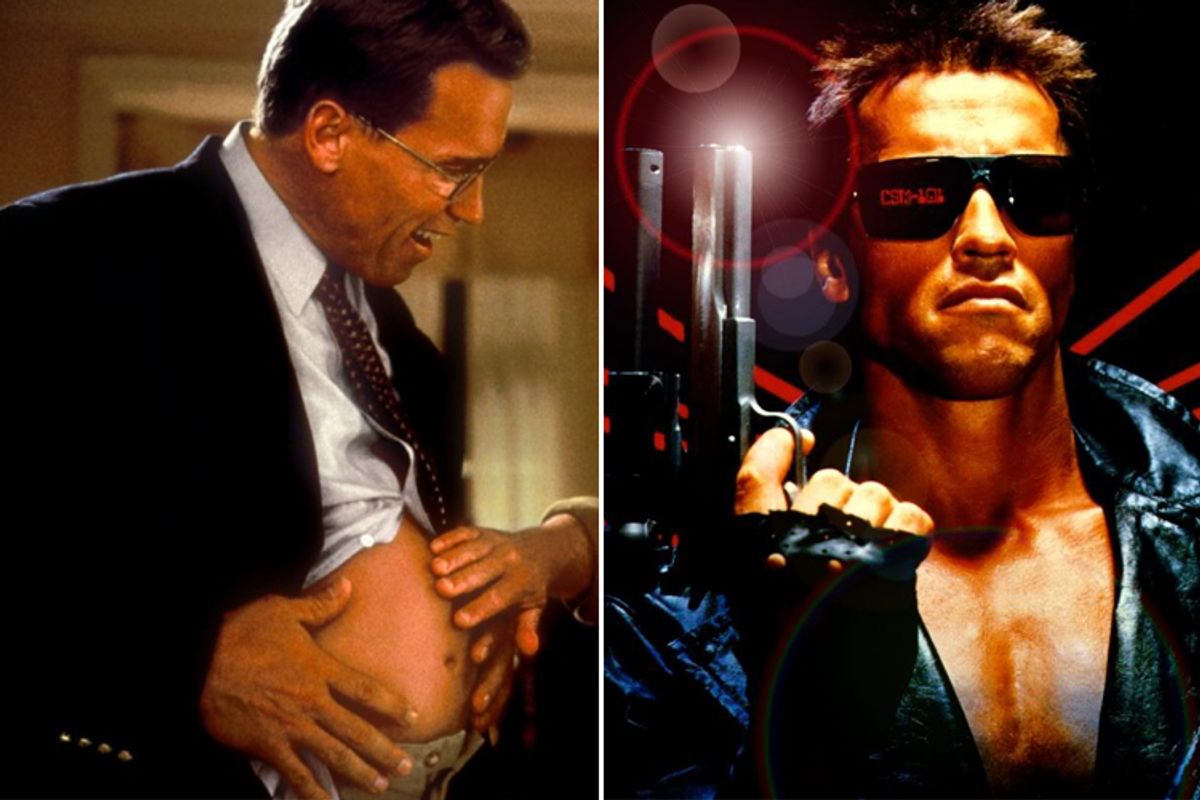 Arnold Schwarzenegger in "Junior," left, and "The Terminator"
--

Few men have the luxury of leaving a career as an action movie star to become the governor of California. Even fewer get to leave office and go right back to becoming action stars. Arnold Schwarzenegger, it turns out, is not one of those men. The Austrian former bodybuilder and more recent impregnator has decided to postpone his plans to return to the big screen after all.

Mere weeks ago, Schwarzenegger was merrily promoting his new superhero comic and animated series, the inevitably named "Governator." It was an enterprise that even Stan Lee promised would be "using all the personal elements of Arnold’s life… his wife… his kids... the fact that he used to be governor." Aaaaaaaand… suddenly a story involving Schwarzenegger's wife and children just isn't such a hot idea more. The project has been iced.

His governatorship was also set to star in three new big budget movies, including two installments of the legendary "Terminator" chronicles. But on Thursday, Schwarzenegger's entertainment attorney issued a statement that he "is focusing on personal matters and is not willing to commit to any production schedules or timelines. We will resume discussions when Governor Schwarzenegger decides." And it's not looking too good for a return to politics either.

Can a man whose movies have made over a billion dollars in the U.S. alone stomp his way back into the movie-going public's hearts? The real question is – how has this man ever had a film career in the first place? This is a guy whose most famous role was as a mechanical object.

Schwarzenegger has certainly never made any bones about where he fits in the world of typecasting. Though he's mixed it up in his film career – swinging between action, action adventure, and action comedy, he's certainly never had any delusions of being a serious actor. The amazing thing is that he's had this career when he's never been an actor, period. His more enjoyable films, like "Predator" or "True Lies," succeed because they're fun movies, not because of his robotic line readings or ability to carry heavy stuff. Watching Schwarzenegger, you find yourself longing for the subtlety of Steven Seagal.

Though he has a stellar track record at the box office, the world is a different place than it was when he withdrew from moviemaking eight years ago. He's more than 20 years older than Jason Statham, and in action hero years, Jason Statham is old. And while grayer hits like "Red" and "The Expendables" -- in which Schwarzenegger cameoed -- prove there's still an audience beyond the "Twilight" crowd, a 63-year-old man who also happens to be a disgraced public figure is a tough sell.

When all the hoo-ha around that cheating on his wife and having a secret second family stuff dies down, Schwarzenegger may yet return in cinematic triumph. There will always be an audience for "Terminator" flicks – there may even an audience for the "Kindergarten Cops" of the world. But if you want a beefy guy who can convincingly kick ass and take names, who can host "Saturday Night Live," who then can then turn around and make your kids fall in love with him, folks, you're not saying you want the Brobdingnagian European. You're saying you want Dwayne "The Rock" Johnson. Maybe someday America will be ready to take the Governator back into acting. But there's no doubt it'd be up for a Rockident of the United States.